For the Rights of the Mapuche 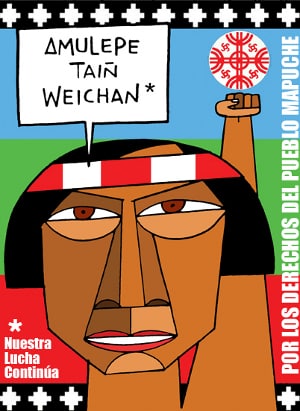 Iván Lira is a Venezuelan artist.  This cartoon was published in Rebelión on 8 October 2010.  Cf. “In the face of the government’s failure to withdraw the charges of alleged terrorism against the Mapuche prisoners, as is stipulated in the accord reached last week, members of this indigenous community who are imprisoned in Chile are planning to launch new protests after the hunger strike that lasted over 80 days.  Mapuche community members demand that the Chilean government modify the Anti-Terrorist Law, a judicial instrument that is a legacy of the repressive dictatorship of General Augusto Pinochet (1973-1990) in this South American country. . . .  The Mapuche prisoners who participated in the protest by fasting had been arrested in the framework of the Anti-Terrorist Law during demonstrations in the Araucanía region, where the ethnically indigenous have been waging a struggle for recognition of the right to their lands.  The indigenous prisoners consider themselves as political prisoners, and, among other things, they are demanding that the Chilean state not prosecute them via military tribunals.  The Anti-Terrorist Law was passed during the dictatorship to persecute the opposition, but it has not been repealed by any of the post-Pinochet administrations, despite the criticism made by the United Nations that this law discriminates against indigenous communities.  The indigenous say that there are lands in this region that have been theirs since before the Spanish colonization, from which they have been dispossessed” (“Comuneros mapuche plantean nuevas protestas por incumplimiento del Gobierno chileno,” TeleSur, 8 October 2010).  Translation by Yoshie Furuhashi (@yoshiefuruhashi | yoshie.furuhashi [at] gmail.com).