Santiago Sierra (Madrid, 1966), an internationally recognized Spanish artist, has just rejected the “Spanish National Prize for Visual Arts,” writing a letter to Culture Minister Ángeles González-Sinde, who, in the Rodríguez Zapatero administration, represents the interests of media magnates.  See below Sierra’s original letter to the minister, dated “Madrid, Brumaire 2010” (the month straddling October and November in the French revolutionary calendar). 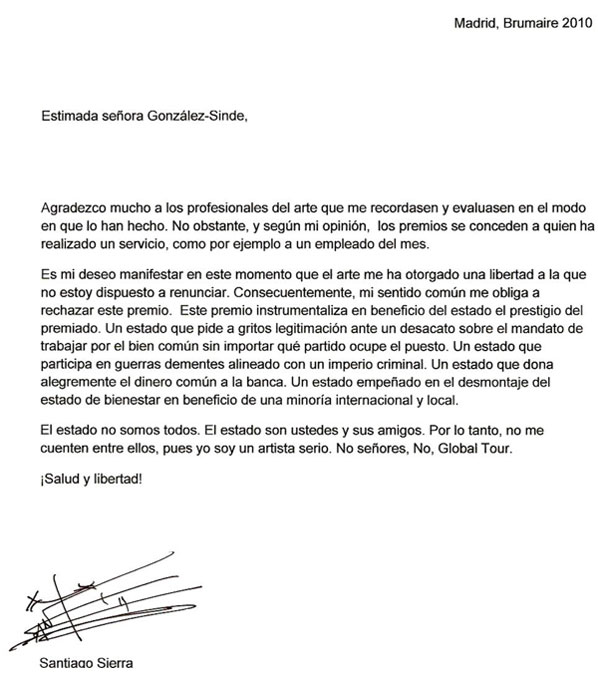 I thank very much the art professionals who recognized me and evaluated me the way they did.  Nevertheless, in my opinion, prizes are awarded to those who have rendered service, as, for instance, in the case of an employee of the month.

I wish to make clear, now, that art has given me freedom, which I am not ready to give up.  Consequently, my common sense obliges me to reject this prize.  This prize exploits the prestige of its winner for the benefit of the state.  A state that is desperate for legitimacy, given its contempt for its mandate to work for the common good no matter which party occupies the office.  A state that participates in crazy wars in alliance with a criminal empire.  A state that happily gives away public money to the banks.  A state committed to dismantling the welfare state for the benefit of a local and international minority.

The state is not for all of us.  The state is for you and your friends.  Therefore, do not count me among them, for I am a serious artist.  No, sirs, No, Global Tour.

Health and freedom for all!

Note: The “Global Tour” refers to an international tour that Sierra started in Berlin last year and brought to diverse cities in Europe and the United States, featuring his three-dimensional work “No.”

Through his “No,” a simple but expressive and resonant cry of opposition, the artist condemns capitalism, exploitation, and submission.  In his own words: “People who are actively fighting against the system need images, and we, artists, must provide them with them.  This ‘No’ is made for all who are fed up with injustice, domination, censorship, and oppression.”  The prize rejected by Santiago Sierra comes with a monetary gift of 30,000 euros, a fat wad of cash that the aforementioned generous givers will now have to figure out where to put . . . a happy (?) ending open to the imagination (or preferences) of each.