From the FWIW department, a video of an anti-war demonstration of 160 people in Shinjuku, Tokyo, Japan, on 5 December 2010.

One of the themes of the Shinjuku demo, as shown in this poster, was (to paraphrase rather than translate): “‘China Will Invade Japan’?  Are You Nuts?” 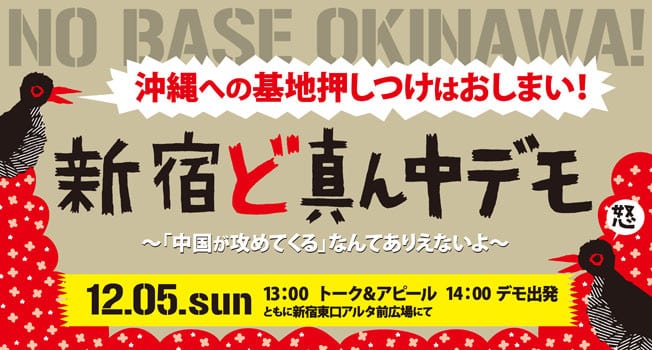 In other words, the crazy Japanese right-wingers are up in arms again, forcing decent peace-loving people, such as shown in the video above, to do what they can to counter their latest — and most ridiculous — line of propaganda: “Okinawa is the front line of Japanese defense against the clear and present danger of Chinese invasion.”1  The demo organizers have this to say in their blog about what they are up against:

So we had our demo on a beautiful autumn day.  Our giant banner at the back of the demo, eight meters long, proclaiming “Voices against War, Now More Than Ever!” attracted the eyes of many a passer-by.  This banner was made in haste just two days before the demo.  Since our last anti-war demo in October, the situation has rapidly deteriorated.  The Senkaku Islands issue and the artillery firing in the Korean Peninsula have made the atmosphere in our society increasingly favorable to military buildup and the reinforcement of the ANPO [US-Japan Security Treaty] regime.  As a matter of fact, greater integration of the US, South Korean, and Japanese militaries is slowly but surely progressing (with very little media coverage).  Moreover, that drift has emboldened those who would have us tolerate the US and Japanese military bases in Okinawa, despite the fact that Okinawa’s gubernatorial election, once again, made it clear that Okinawans continue to say “No to the Henoko Plan.” . . .  Like our last demo, the lead contingent of this demo held up a huge banner that read: “Don’t Tread on Okinawa.”  Our ideal is to create a society in which this banner will become unnecessary.  Unfortunately, Okinawa has been tread upon in 2010 (yet again).

Perhaps noting the weak state of the Left in Japan, the Russians — no doubt simpatico with the Chinese on this problem — apparently decided to put their own two cents in.

The Japanese government might at least pay attention to that vigorous note of objection — if not to the quiet voices of all too pacific citizens of Japan.

1  The laughably fake nationalism of the Japanese Right — huffing and puffing against China over the Senkaku Islands, while meekly accepting the daily US violation of Japanese sovereignty in Okinawa — is neatly illustrated in this cartoon by IchiHanaHana: <18787.main.jp/fuushi/201011-senkaku-color-s.jpg>.