Before Haiti’s November 28 election was held, its legitimacy was called into question because of the exclusion of over a dozen political parties from the election — including Haiti’s most popular political party, Fanmi Lavalas.  The ban on Fanmi Lavalas was analogous to excluding the Democratic or Republican Party in the United States.

As expected, there were also major problems in the conduct of the elections and the tallying of votes.  This report is based on an examination of the 11,181 tally sheets from across the country that were posted online by Haiti’s Provisional Electoral Council (CEP).1  Each tally sheet represents an individual voting booth.

For some 1,326 voting booths, or 11.9 percent of the total, tally sheets were either never received by the CEP or were quarantined for irregularities.  This corresponds to about 12.7 percent of the vote, which was not counted and is not included in the final totals that were released by the CEP on December 7, 2010 and reported by the press.  This is an enormous amount of votes discounted, by any measure, and especially in an election in which the difference between the second and third place finisher, according to the official preliminary results — which determines who will participate in the run-off election — was just 0.6 percent of the vote.

This 13 percent of votes discounted is also much larger than what has been stated by the Organization of American States (OAS) and CEP in the media.  The Associated Press cited the Assistant Secretary General of the OAS, Albert Ramdin, reporting that: “Nearly 4 percent of polling place tally sheets used to calculate the results were thrown out for alleged fraud at the tabulation center, Ramdin said.”

In addition, there were a large number of clerical errors — these were found for more than 5 percent of the tally sheets.  This further undermines the credibility of the vote count.

Ignoring the clerical errors, and combining the tally sheets that were not counted by the CEP (11.9 percent) and those with irregular vote totals (8.4 percent) — those that would be expected to occur less than one percent of the time) — there are 2,269 tally sheets that were either not counted or found to be irregular.  This represents nearly 300,000 votes, or over 24 percent of total votes.2  This is an enormous percentage of the vote that was not or should not be counted, again especially considering the closeness of the vote.  Given the extremely high number of clerical mistakes and the missing and irregular tally sheets, it is unlikely that any recount could provide a reliable measure of the actual results.

Because of the failure to provide accessible voting centers to Internally Displaced Persons (IDPs), voter participation was even lower in Port-au-Prince and surrounding areas where the number of IDPs is the greatest.

The OAS technical mission is currently conducting a re-count of the tally sheets.  Given the exclusion of the country’s most popular political party; the exclusion of 11.9 percent of tally sheets; the 8.4 percent of irregular votes; the extremely low participation rate and the disenfranchisement of hundreds of thousands of displaced people, they should reject this result and start over with a free and fair election, even if that takes more time to organize. 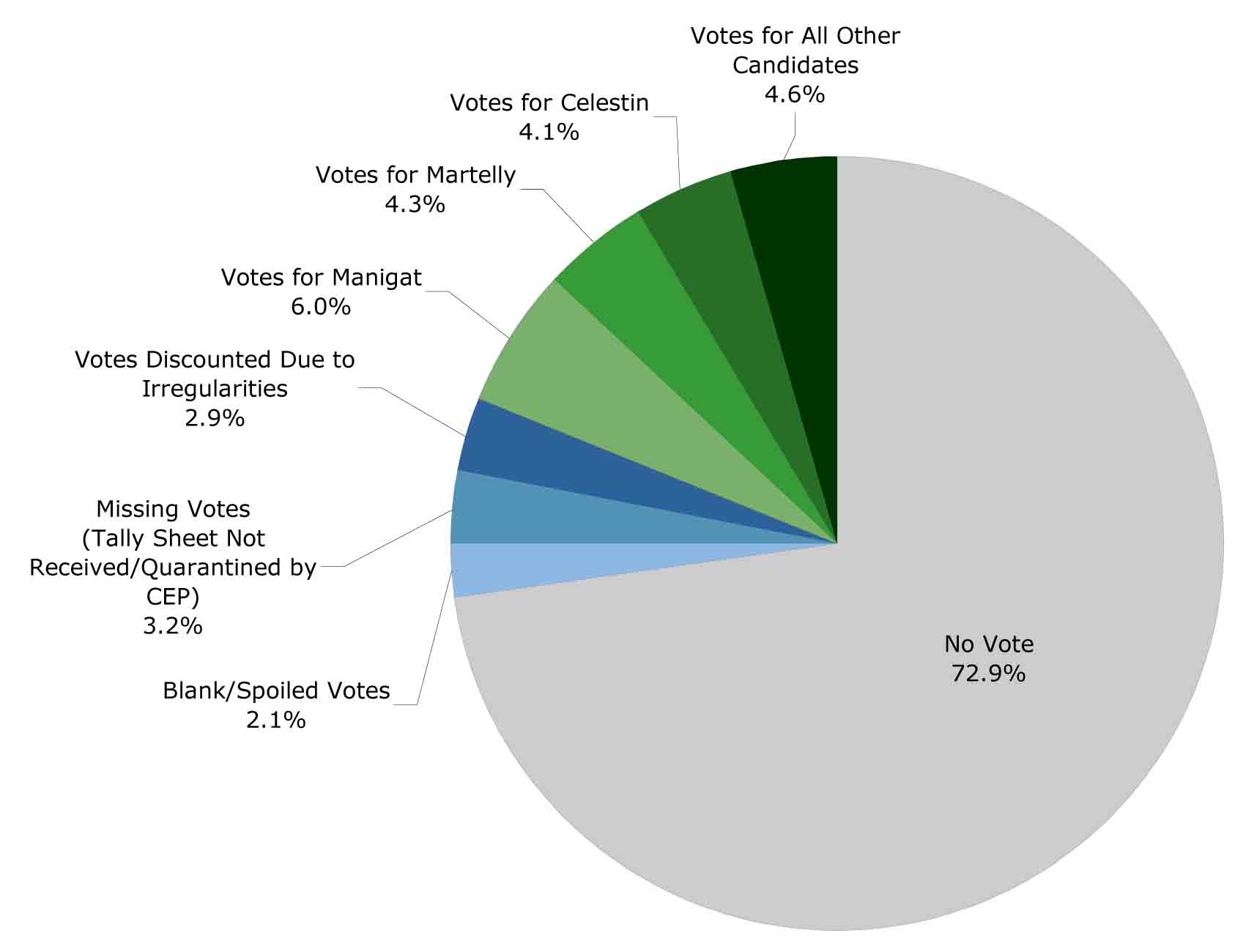 1  The CEP’s website had originally listed the city of Saint Marc in the Artibonite department as containing 223 voting booths, however the true number was actually 233.  The CEP has since updated their website to reflect this.

2  Between one and less than three percent of these tally sheets could be expected to fall outside of the confidence interval due to random variation — see Appendix.

Mark Weisbrot is an economist and Co-director of the Center for Economic and Policy Research in Washington, D.C.  Jake Johnston is a Research Assistant at CEPR.  This article was first published by CEPR in January 2011 under a Creative Commons license.