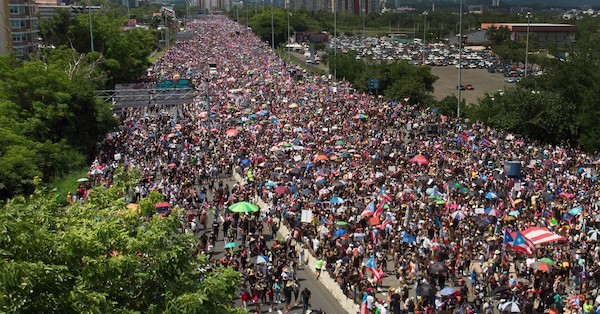 An aerial view shows thousands of people as they fill the Expreso Las Américas highway calling for the ouster of Gov. Ricardo A. Rosselló on July 22, 2019 in San Juan, Puerto Rico. (Photo: Joe Raedle/Getty Images)

Hours after Gov. Ricardo Rosselló resisted calls to step down over messages mocking victims of Hurricane Maria and attacking fellow politicians with misogynistic slurs, an estimated 400,000 Puerto Ricans took to the streets Monday and demanded Rosselló’s resignation in what was described as one of the largest protests in the island’s history.

“The people have spoken,” Rep. Alexandria Ocasio-Cortez (D-N.Y.), whose mother was born in Puerto Rico, tweeted in response to video footage of Puerto Ricans flooding miles of the Las Américas highway.

Wow. Puerto Rico.
You don’t get this perspective from the ground.
They are Loud.
Determined.
United. pic.twitter.com/3JMmbc8NY2

Now it’s raining on the protesters in Puerto Rico.

And they don’t care.#RickyRenuncia #ParoNacional

The highway march was part of an island-wide general strike aimed at forcing Rosselló’s ouster. As the New York Times reported, classes on the island were canceled, the largest mall in San Juan was closed, and banks did not open amid the massive demonstrations against Rosselló.

In an address on Sunday, Rosselló announced he is stepping down as head of his party and said he will not run for reelection in 2020, but stopped short of resigning.

“Governor Ricardo Rosselló has made further mockery of the Puerto Rican people by refusing to leave office,” the progressive coalition Power 4 Puerto Rico said in a statement Monday. “As worldwide demonstrations calling for the governor to step down continue, the legislature of Puerto Rico must now commence an impeachment process based on the ample evidence corroborated by many jurists of Rosselló breaking the law.”

Laura Rexach Olivencia, a Puerto Rico radio host, called Rosselló’s refusal to listen to the public and step down “a slap in the face to all Puerto Ricans.”

“For him to think he can keep governing for another year and a half as if nothing has happened is insulting to our core,” said Olivencia.

#FunFact of this march in #PuertoRico. It wasn’t scheduled by any organization. It happened organically in social media by #PuertoRicans who wanted to protest against #Rosselló, demanding his resignation. #ParoNacional #News #ParoNacionalPR #RickyRenuncia 🎥:@NoticentroWAPA pic.twitter.com/gpLBXPhbPY

This video from @nataliarodmed of @latinorebels says it all for me. Look at how many people are marching. #ParoNacional #RickyRenuncia #PuertoRico pic.twitter.com/RsUhFcfQMd

Author and environmentalist Naomi Klein—who has written extensively on how Wall Street vultures have exploited Puerto Rico’s debt crisis for profit as residents suffer brutal austerity—called the demonstrations “absolutely extraordinary” and said they are about problems that run much deeper than Rosselló.

“Sending love and solidarity to Puerto Rican revolutionaries who are showing the world how it’s done,” Klein tweeted.

This is about #RickyRenuncia but also the anti-democratic Junta, the odious debt, and the right to sovereignty on every front!