The Case-Shiller 20-City index fell sharply again in December, dropping a full percentage point from its November level.  This is the third consecutive month that it has fallen by at least 1.0 percent.  It is now down by 4.3 percent from its peak in July.  Nineteen of the 20 cities had a drop in prices.  The exception was Washington, D.C. where prices rose by 0.3 percent.

While the sharpest declines had been in the Midwest in prior months, the December data shows a more diverse pattern.  The sharpest drop was a 2.6 percent price decline in Tampa, followed by a 2.3 percent drop in Detroit, and a 2.0 percent decline in Seattle.  Tampa was one of the epicenters of the housing bubble.  At the bubble peak in 2006, nominal prices in Tampa were more than 170 percent above their levels from a decade earlier.  Prices would have to drop another 10 percent to get back to their pre-bubble level in real terms.

Detroit continues to show the wreckage from the collapse of the Big Three auto manufacturers.  Nominal prices in Detroit are back to their 1994 level, implying a real decline of more than 40 percent.  With prices falling at a 23.9 percent annual rate over the last quarter, it is unlikely that prices will stop their decline any time soon.

The situation in Seattle is interesting since Seattle, like Portland, had previously been shielded from the worst effects of the housing bust.  It seems that this is no longer the case as prices in both cities are now falling rapidly.  Prices in Portland fell by 1.2 percent in December.  Over the last three months prices in Portland have fallen at a 15.8 percent annual rate, while they have fallen at a 16.4 percent rate in Seattle.  Nominal rents are now falling in both cities — just moderately in Portland but by more than 3.0 percent since the 2008 peak in Seattle.  This suggests a considerable over-supply of housing.

In Portland the recent price declines are concentrated in the bottom tier of the market, undoubtedly the result of the end of the first-time buyers tax credit.  Prices in this segment of the market have fallen at a 24.3 percent annual rate over the last three months compared with a 13.9 percent rate at the top end.  In Seattle the pattern is more mixed, with prices falling at a 14.8 percent rate at the bottom end compared with a 17.4 percent rate for homes in the top tier. 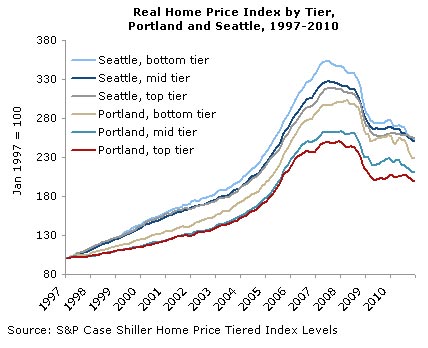 The price declines have also diffused from the bottom tier throughout the housing market in other cities.  In Atlanta and Minneapolis, where the price of homes in the bottom tier had been plummeting, prices for lower-end homes fell by 0.2 percent and 0.8 percent, respectively, in December.  By contrast, the prices of homes in the middle tier dropped by 1.5 percent and 2.4 percent, bringing their annual rate of decline over the last three months to 15.9 percent and 20.6 percent, respectively.

Prices in New York continued to decline rapidly, falling 0.9 percent in December, bringing their annual rate of decline over the last three months to 14.2 percent.  This drop is hitting all segments of the market nearly equally.

There seems to be little reason to think that the rate of price decline will slow any time soon.  There has been a sharp rise in mortgage interest rates over the last two months, none of which is reflected in this report.  The December report is showing the prices of homes where the sales closed over the prior three months, meaning that they were mostly contracted in the period from July to October, when interest rates were near their low-point.

While rates still remain low by historical standards, a rise of mortgage rates by 0.8 percentage points has to be somewhat of a negative in the housing market.  This means that the annual rate of price decline, 12.5 percent over the last three months, will likely increase in the months ahead.  This will imply the destruction of more than $2 trillion in housing wealth compared with peaks reached last summer.

Dean Baker is an economist and Co-director of the Center for Economic and Policy Research, in Washington, D.C.  This article was first published by CEPR on 22 February 2011 under a Creative Commons license.