On Saturday March 12 at 3:36 pm local time (1:36 am EST) an explosion occurred in the Unit 1 reactor building at the Fukushima Dai-ichi nuclear plant.  (Original reports suggested that the explosion took place in an adjacent turbine building, but we no longer believe this is the case.)

The explosion was very likely a hydrogen explosion.  Hydrogen apparently collected somewhere in the reactor building outside of the primary containment (see diagram below).  The primary containment consists of the drywell and the wetwell.  The top section of the reactor building, known as the refueling bay, has walls of sheet metal, in contrast to the concrete walls of the lower part of the building.  The pressure caused by a large enough explosion anywhere in the reactor building would have caused the sides of the refueling bay to blow out since that is the weakest part of the structure and is not designed to withstand high pressures. 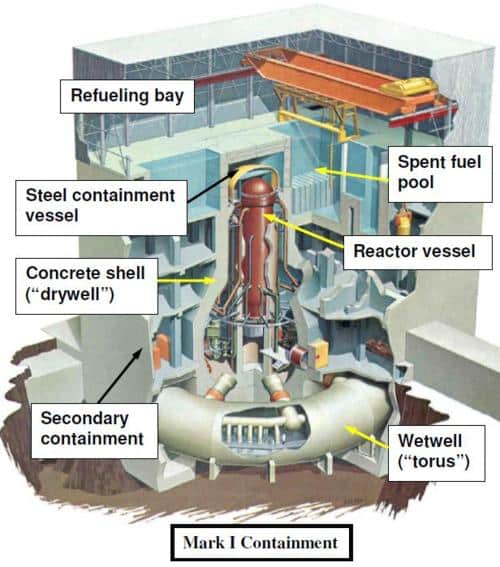 The hydrogen was likely produced by the hot fuel.  All signs are consistent with the fact that some fuel damage has occurred at Fukushima Unit 1.  Last night (U.S. time) the plant owner, TEPCO, reported that the water level had dropped below the top of the fuel by nearly six feet.  This means that roughly half of each fuel rod was exposed.  The fuel rods are clad in zirconium, and a few minutes after the water level dropped below the top of the fuel, the zirconium would have become hot enough to react with the surrounding steam and produce hydrogen.

The control room and many of the control and power cables for the emergency equipment used to cool the reactor core are located outside the primary containment, and the extent to which the explosion impaired these vital functions is not known at this time.

Once the water level in the reactor core drops to the point where the fuel is exposed, the zirconium cladding would begin to erode and after about an hour, this would release some radioactive material — primarily noble gases, iodine-131 and cesium-137.  (During normal operation, this material accumulates in the gap between the fuel and the cladding.)  Some of this material could have been released by the controlled venting, which could explain the cesium detected at the plant boundary.

In addition, the primary containment in this type of reactor typically has a leak rate of about 1% of its volume per day.  The secondary containment (the walls of the reactor building) is important since it keeps any leaked radioactive gas from escaping into the environment.  The secondary containment is kept at a negative pressure with respect to the outside so that air inside does not leak out.  The air in the building is then sent through filters to remove the radiation before it is released through the stack.  With the walls blown off the top of the reactor building, this radioactive gas would instead be released directly into the air.

Thus, contrary to some news reports, the detection of cesium outside the reactor does not necessarily indicate that the primary containment has been breached.

Iodine-131 is one of the most radioactive isotopes released in a nuclear accident.  It has a half-life of 8 days, meaning half of it will have decayed after 8 days, and half of that in another 8 days, etc.  Therefore, it is of greatest concern in the days and weeks following an accident.  It is also volatile so it will spread easily.  In the human body, iodine is taken up by the thyroid, and becomes concentrated there, where it can lead to thyroid cancer in later life.  Children who are exposed to iodine-131 are more likely than adults to get cancer later in life.  To guard against the absorption of iodione-131, people can proactively take potassium iodine pills so the thyroid becomes saturated with non-radioactive iodine and is not able to absorb any iodine-131.

Cesium-137 is another radioactive isotope that has been released.  It has a half-life of about 30 years, so it will take more than a century to decay by a significant amount.  Living organisms treat cesium-137 as if it was potassium, and it becomes part of the fluid electrolytes and is eventually excreted.  Cesium-137 is passed up the food chain.  It can cause many different types of cancer.

The cooling systems for the Unit 1 reactor have not been operating and, as the core heats up, the water surrounding the fuel has evaporated to the point where the fuel becomes exposed to the air.  Unless there is a way to replace the water the fuel will continue to heat up.

To attempt to cool the reactor, TEPCO has been pumping sea water into the reactor vessel.  Since this is very corrosive and will seriously damage the reactor, this is an option of last resort and indicates that they do not expect to get the cooling systems back online.

Reports note that boric acid is being added with the sea water.  Boric acid is a soluble form of boron, which is very good at absorbing neutrons.  By adding this to the water around the fuel rods, it would capture neutrons that could otherwise cause additional atoms to fission.  This is being added to the reactor to make sure it does not become critical again, which might happen in two ways: (1) fuel rod damage that results in fuel rod segments dropping to the bottom of the reactor vessel, where they could form a critical mass, or (2) withdrawals of the control rods caused by malfunctions of the hydraulic control units that move the control rods in and out of the core.

Recent reports state TEPCO has succeeded in filling the reactor vessel with water, which would mean the fuel rods are no longer exposed to air.  But some form of cooling will still be required.

This article was first published in the All Things Nuclear blog of the Union of Concerned Scientists.  It is reproduced here for non-profit educational purposes.