A number of news reports by AFP, the Guardian, and other news agencies and outlets are suggesting that Syrian security forces were responsible for shooting nine Syrian soldiers, who were killed in Banyas on Sunday.  Some versions insist that they were shot for refusing orders to shoot at demonstrators.

Considerable evidence suggests that this is not true and that Western journalists are passing on bad information.

My wife spoke this morning to one witness who denied the story.  He is Colonel Uday Ahmad, brother-in-law of Lt. Col. Yasir Qash’ur, who was shot and killed in Banyas with eight other Syrian soldiers on Sunday, April 10, 2011.  Uday Ahmad was sitting in the back seat of the truck which Yasir was driving when he was shot dead on the highway outside Banyas.  Uday said that shooting was coming from two directions.  One was from the roof of a building facing the highway and another from people hiding behind the cement median of the highway.  They jumped up and shot into the two trucks carrying Syrian troops, killing 9.  Col. Uday survived.  Here is video of the shooting shown on Syrian TV sent by my brother-in-law, Firas, who lives in Latakia.

* Video of one soldier purportedly confessing to being shot in the back by security forces and linked to by the Guardian has been completely misconstrued.

The Guardian irresponsibly repeats a false interpretation of the video provided by an informant.  This is what the Guardian writes: “Footage on YouTube shows an injured soldier saying he was shot in the back by security forces.”

The video does not “support” the story that the Guardian says it does.  The soldier denies that he was ordered to fire on people.  Instead, he says he was on his way to Banyas to enforce security.  He does not say that he was shot at by government agents or soldiers.  In fact he denies it.  The interviewer tries to put words in his mouth but the soldier clearly denies the story that the interviewer is trying to make him confess to.  In the video, the wounded soldier is surrounded by people who are trying to get him to say that he was shot by a military officer.  The soldier says clearly, “They [our superiors] told us, ‘Shoot at them IF they shoot at you.'”

The interviewer tried to get the wounded soldier to say that he had refused orders to shoot at the people when he asked: “When you did not shoot at us what happened?”  But the soldier doesn’t understand the question because he has just said that he was not given orders to shoot at the people.  The soldier replies, “Nothing, the shooting started from all directions.”  The interviewer repeats his question in another way by asking, “Why were you shooting at us, we are Muslims?”  The soldier answers him, “I am Muslim too.”  The interviewer asks, “So why were you going to shoot at us?”  The soldier replies, “We did not shoot at people.  They shot at us at the bridge.”

* Alix Van Buren, a veteran reporter for la Repubblica, Italy’s leading newspaper, is in Damascus and sends the following report about he possible role of armed Khaddam agitators in Banyas.

Josh, the picture is extremely confusing and it is often impossible to confirm data on the web.  The absence of most foreign media here in Syria adds to that murky picture.  What I can contribute about the question of “foreign meddling” is the following.  These are direct quotes from leading and respected opposition members:

Sunday two of ex-Vice President Khaddam’s men were arrested in Banyas.  A human rights activist confirmed that they were sowing trouble by distributing money and weapons.  I don’t know what to make of the confessions of the three guys shown on Syrian TV today.  However, several Syrian dissidents believe in the presence and the role of “infiltrators”.  Michel Kilo, though he accepts that possibility, cautioned that the issue of “infiltrators and conspiracies” should not be exploited as an obstacle in the quick transition towards democracy.

Haytham al-Maleh was the most explicit in pointing to the meddling of Khaddam people in and around Baniyas.  He also mentioned the “loose dogs” loyal to Rifa’t al-Assad.  According to him they are active particularly along the coast between Tartous and Latakya.  Here is a link to my interview with al-Maleh in La Repubblica.

The veteran blogger Ahmed Abu ElKheir, unfortunately now in prison for the second time in less than a month, and not yet released, has links to Banyas.  The first, peaceful demonstration of Saturday morning was also sparked by the request for his release.  In his Facebook profile, before being arrested, he too lashed out against Khaddam.  Several commentators from that area agreed with him, cursing Khaddam for meddling “with the blood of the innocents”.

Finally, what do you make of the remarks by Haytham al-Manna from Paris to Al Jazeera?

There is much buzz about that over here, although the Western media doesn’t seem to have picked upon it yet.  See the text in Arabic from Al Watan.  Manna basically says that he was approached by a group of men, including a Syrian businessman holding a foreign passport, who asked him to facilitate the distribution of money and weapons to the young demonstrators.  There is a vague reference to a person in the group, linked to a “major Arab Gulf country”.  Al-Manna is from Dera’a, and if what he said is confirmed, his origin adds significance to the context.  He reportedly issued a warning to the people in Dera’a not to accept offers of money or weapons from anyone.

I am trying to get confirmation of the above directly from him.

Postscript to the previous note sent by Alix Van Buren:

I finally got through to Haytham Manna in Paris.  He confirmed the story of Al Watan, adding a few details: he spoke about three groups having contacted him to provide money and weapons to the rebels in Syria.  First, a Syrian businessman (the story reported by Al Jazeera); secondly, he was contacted by “several pro-American Syrian opposers” to put it in his words (he referred to more than one individual); thirdly, he mentioned approaches of the same kind by “Syrians in Lebanon who are loyal to a Lebanese party which is against Syria”.  Well, he probably means Hariri.  But that is MY OWN ASSUMPTION, as he flatly refused to name names, for he said he does not want to get into “les contrastes libano-libanaises”.  But when I pronounced that name asking him to fully express his thought, he did not contradict me.  He did also refer to other nationalities “meddling” in the Syrian rebellion.  He stated that the “Intifadat Karama”, the Intifada of Dignity, is a “purely Syrian affair” and that no one, “neither Jordanians, nor Lebanese, nor Saudis”, should interfere.  “It is a matter that Syrians must resolve among themselves”.

He also was extremely firm in saying that anyone providing money and weapons to the Syrian rebels is “pushing them to commit suicide”, as “the confrontation with the Security apparatus cannot be won through armed clashes.  Both the firepower and the sheer numbers of the military plus the security (which he puts at 2,5 millions in total) would crush them”, he says.  In his opinion, “the young can prevail only through non-violence.  He agrees that there are people close to Khaddam and Rifa’t along the coast, but he believes “they are very few — in the dozens” — and that the two exiled Syrians “don’t really have a political base of support”.  The people who do create trouble and receive money for doing so, according to him, are simple “misérables”, “destitute individuals who will do so in exchange for money”.

All of the above is part of the current discourse among the Syrian opposition.

* A three-page document purporting to be a “top secret” Mukhabarat memo, giving instruction to intelligence forces that “it is acceptable to shoot some of the security agents or army officers in order to further deceive the enemy” has been published on the web and republished by All4Syria. 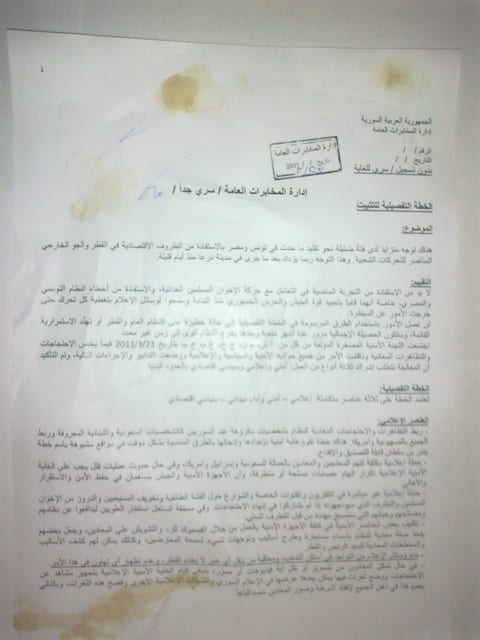 A copy was sent to me with a translation by a journalist with a leading magazine for my thoughts.  It has blood splattered on it and is clearly a fake.  What army, after all, would survive even days if its top officers were publishing orders to shoot its own officers?  Not a good moral booster for the troops.

Joshua Landis is Director of the Center for Middle East Studies and Associate Professor of Middle Eastern Studies at the University of Oklahoma.  Read his blog Syria Comment at <www.joshualandis.com/blog/>.  This article is an excerpt from a 13 April 2011 entry in his blog; it is reproduced here for non-profit educational purposes.