A few months ago, just walking too close to the Military Prosecution Complex in Cairo’s district of Nasr City could have landed you in jail.  But on May 31, the area surrounding the complex was the stage for a demonstration in solidarity with OnTV’s presenter Reem Maged, socialist activist and blogger Hossam El Hamalawy, and journalist Nabil Sharaf El Din.

The three were asked to appear in front of the military prosecution following remarks El Hamalawy and Sharaf El Din made against what they said were military police violations against civilian detainees and what they saw as an ambivalent attitude from the Supreme Council of Armed Forces (SCAF) towards the revolution.

The gathering in front of the military facility was not the first of its kind.  However, it was the largest in number (around 500 people took part in the demo) and it was the first time that fearless and fierce chants against the army and Field Marshall Mohamed Hussein Tantawi were heard near a military establishment, let alone one as vital as this building, which is dubbed C28.

And while mainstream media provided only a watered-down coverage of the demonstration, social media activists, especially on Twitter, were updating their followers of the demo with tweets, pictures, and videos.

On Twitter, activist Gigi Ibrahim (@GSqaure86) states that: “The chants haven’t stopped once since 10:30 all against military rule and Tantawi.  No military trials #NoSCAF.”  While activist student Noor Noor (@noornoor1) provides the latest update on the status of the three under interrogation: “A lawyer just came out and said that there will be no ‘official investigation’ opened with reem. Hossam, or nabil.”  Journalist and activist Sarah Carr (@sarahcarr) provided high quality photos of the demo on her flickr account.

By midday, what started as a summon for formal investigation ended with an “informal chat” and Maged, El Hamalawy, and Sharaf El Din were released without being charged.  Protesters cited their gathering and their chants that stressed strong refusal of the notion of a Military-Ruled Egypt as the reason for the three’s release.

Gigi Ibrahim (@GSquare86) asserts that: “Twitter + Media + people in street turned an interrogation into ‘a chat’ . . the power of the people is all we got . . hope for the revolution.”  And even El Hamalawy himself seems to share this belief on his Twitter account @3arabawy: “And I’m sure today’s protest, as well as the public campaign, are the only reasons I’m out today.”

Although all three were released, activists say they will keep lobbying for the rights of thousands of Egyptian civilians who received swift and tough sentences by military tribunals and are now in military prisons.  In doing so, these activists are, as well, increasingly challenging what the military establishment deems as its ‘red line’ asserting that the only Red Line in post-Revolution Egypt must be the Egyptian people themselves. 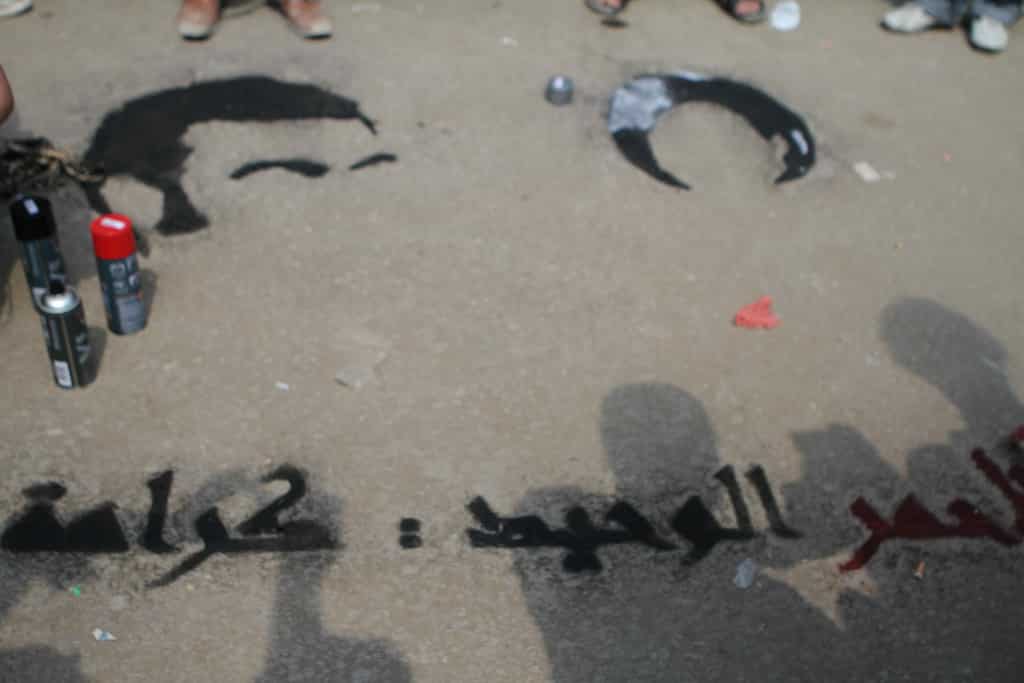 “The only red line is Egyptian dignity.”  Photo by Sarah Carr

Lilian Wagdy is a citizen journalist, who blogs at <barefootcountess.blogspot.com>.  Follow Wagdy at <twitter.com/#!/lilianwagdy>.  This article was first published in Global Voices Online on 1 June 2011 under a Creative Commons license.