The failure of the Indian state more than six decades after Independence to provide universal access to quality schooling and to ensure equal access to higher education among all socio-economic groups and across gender and region must surely rank among the more dismal and significant failures of the development project in the country.  It is not only that the expansion of literacy and education has been far too slow, halting and even geographically limited.  It is also that educational provision itself remains highly differentiated in both quantitative and qualitative terms.

There are huge differences in access to both schooling and higher education across location (rural/urban or state), economic category and social group, as well as by gender.  And there are very significant variations in the quality of institution across different schools, colleges and universities, which mean that the experience of education is different for different students.

These differences in quality cannot be simplified into government or public versus private as is quite commonly done in journalistic discourse: there are some good government schools and some terrible private schools.  In general, public higher educational institutions perform much better than private ones.  All the so-called “institutions of excellence” in higher education are publicly created and publicly funded.  Rather, the differences in quality often unfortunately reinforce differences on the basis of location and social divisions.

Thus, institutions in backward areas and in educationally backward States tend to be both underfunded and of poorer quality than institutions in metros or in more educationally developed States.  Rural schools are often worse than urban schools (although once again, this is not inevitable) and schools catering to elite or middle-class children tend to be better than schools for the urban poor serving slum children or rural schools serving the children of agricultural labourers.  Schools with dominantly upper-caste children also tend to provide better services than schools mostly catering to Scheduled Caste or Scheduled Tribe or Muslim children.  Schools with only girl students are more likely to be deficient in basic facilities, including toilets and fans in classrooms, and teaching aids.  And so on.

These differences in the quality of schooling have significant implications because they do not simply affect the quality of education per se; they also affect the chances of entry into higher education and the possibilities of socio-economic advancement that come from such entry.

Thus, the access of deprived social groups is adversely affected not only by sheer quantitative variations, but also by differences in the quality of schooling.  Since this acts as a filtering process for further education, it is not surprising that evidence of exclusion grows as one goes up the education ladder.  Obviously, intelligence and merit must be normally distributed in society.  So these very strong indicators of differential access to higher education across social groups do not reflect actual differences in the innate quality of aspiring students but the socio-economic discrimination that reduces the chances of many meritorious students even as it privileges the children of the elite who have access to “better” schooling.  This is why the process of democratising even higher education cannot proceed very far without ensuring much more equitable social access to good-quality schooling.

All this, in turn, is critically determined in the first instance by public funding.  It is difficult, if not impossible, to impart quality education “on the cheap”.  You cannot ensure quality without reasonably good infrastructure, sufficient numbers of trained and adequately compensated teachers, other amenities and teaching aids, including access to new technologies that are becoming an essential part of contemporary life.  Yet the attempts to universalise school education have all too often been associated with just such a tendency, relying on underpaid “parallel” teachers, who in turn are forced to function with completely inadequate infrastructure and lack of even basic facilities.

Ensuring a reasonable quality of education to all children — and thereby also ensuring a greater democratisation of the entire process — necessarily requires a significant expansion of the resources to be provided to elementary school education.  It is not just the need to expand the system to cover all children, as described in the Right to Education Act, which determines this.  It is also because existing institutions have to be upgraded so that they qualify as schools providing good-quality education.

This is even more important because of the need to upgrade the “education centres” that are operating in many States to proper schools that meet all the norms in terms of trained teachers and minimum facilities, among other things.  Also, in the urge to increase the coverage of secondary education, many primary schools are being upgraded to secondary school status without providing sufficient teachers, rooms and other pedagogical requirements such as specialised subject teachers and science laboratories.  This severely compromises the quality of such secondary school education.

This is the context in which public expenditure on schooling must be assessed.  This is not something that the current government is unaware of.  Indeed, the need for greater public spending on education has been openly acknowledged in official quarters, even during the first tenure of the United Progressive Alliance (UPA).  The National Common Minimum Programme of UPA-1 pledged to raise public spending in education to at least 6 per cent of the gross domestic product (GDP) with at least half this amount being spent on primary and secondary sectors.  While there was some increase in the Central government expenditure, this particular goal was nowhere near being achieved by UPA-1, with public spending on education remaining at around 4 per cent of GDP, and certainly well below 5 per cent.  The second tenure of the UPA has been marginally worse, with no significant increase in allocations for education.

As evident from Chart 1, this is an embarrassingly low ratio even by the standards of other developing countries.  It is less than a quarter of the equivalent ratio in Cuba, but even well below the percentage of public spending on education to GDP in countries such as Kenya, Malawi and Ethiopia.  And despite the UPA’s promises and recent endeavours, the ratio in India is still substantially below that of the weighted average of all the countries in the world. 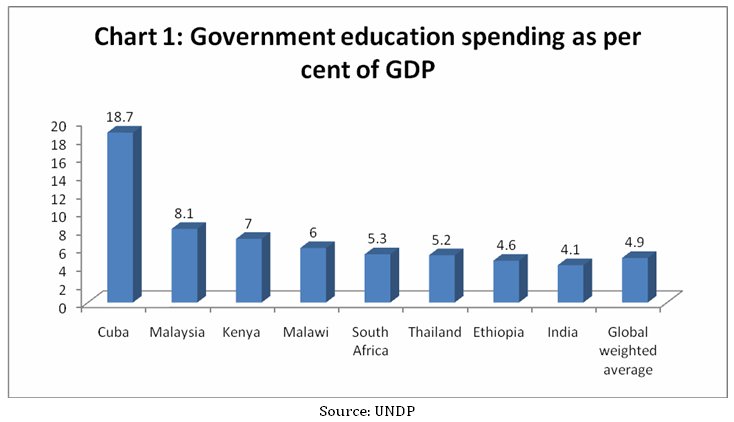 To make matters worse, instead of providing a big increase in the funding for school education, the Central government has actually retracted by reducing its commitment on Sarva Shiksha Abhiyan from 75 per cent to 50 per cent.  This is a big blow, not only for those States where school education is still far from universal, but also for other States where there is a pressing need for more funds to improve the quality of schooling.  Chart 2 shows that the State governments taken together are currently spending around 14 per cent of the total expenditure on education at all levels, a decrease from the level a decade ago but an increase compared with the middle years of the previous decade.  But the Central government’s declared desire to increase education spending is barely reflected in the budgetary figures with the amount spent remaining a shockingly low proportion of the total public spending. 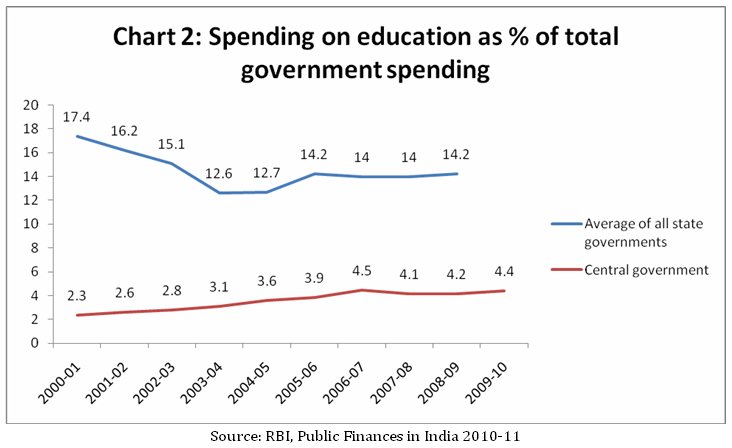 Of course, it is true that resources alone are not enough.  There are many other changes and reforms required in our school and higher education systems: greater decentralisation, greater flexibility, changing patterns of examination, different and more creative and relevant teacher training, and so on.  But significantly higher levels of public funding are the necessary precondition for any other reforms to be successful, and indeed for us to even dare to hope for improved quality of education.

Surprisingly, even this rather obvious conclusion has become a matter of debate in India at present.  It is generally agreed that more resources are required for education, but there are arguments that instead of relying on more public funding greater freedom should be granted for private provision of education.  According to this view, there is no reason for the state to get into education provision, and instead it should focus on creating an “enabling environment” for private provision, even, if necessary, by recognising the possibility of profit-making investment in education, as in Singapore.

There are several levels of response to this argument.  First, the significant presence of positive externalities in education (which means that the benefits of providing education extend beyond the agent that is spending the resources, to society as a whole) means that if it is left only to private hands it will be significantly underprovided, and poor children in backward areas, for example, will simply not be reached.

In any case there are good reasons why commercialisation of education is actually prohibited by law in India (even though it is — as with so many other laws — often more honoured in the breach).  The possibility of being exploited by unscrupulous private providers who take advantage, particularly of those who do not have the access to information or training that would allow them to discriminate, is very high.  That is why the explicit legal and official focus has been to encourage charitable institutions such as trusts and educational societies to provide private education.

This has not prevented all sorts of other private educational institutions from coming up, and naturally there is immense variation.  There are excellent institutions with very good track records, including those which are actively engaged in affirmative action to ensure greater access for underprivileged children.  At the opposite end, there are crammed tutorial centres and hole-in-the-wall teaching shops masquerading as “English medium” schools to profit from the unmet hunger for education that is so marked across India.

A recent survey (India Human Development Survey 2010) of 41,554 households across India allows us to compare the incidence of private schooling and the relative costs of such schooling across States.  The results are shown in the accompanying table, from which several interesting features emerge.  The ratio of private enrolment in schools for children aged 6-14 years varies dramatically across States, from a low of 6 per cent in Assam to a high of 52 per cent in Punjab.  While both Punjab and Haryana have high ratios of privatisation of schooling, it is not as if this feature is otherwise strongly correlated with per capita income in the State.  Nor is it that private education is always greater where public education is less funded (defined by the per capita annual total expenses in government schools), or even where the gap between public and private funding is large. 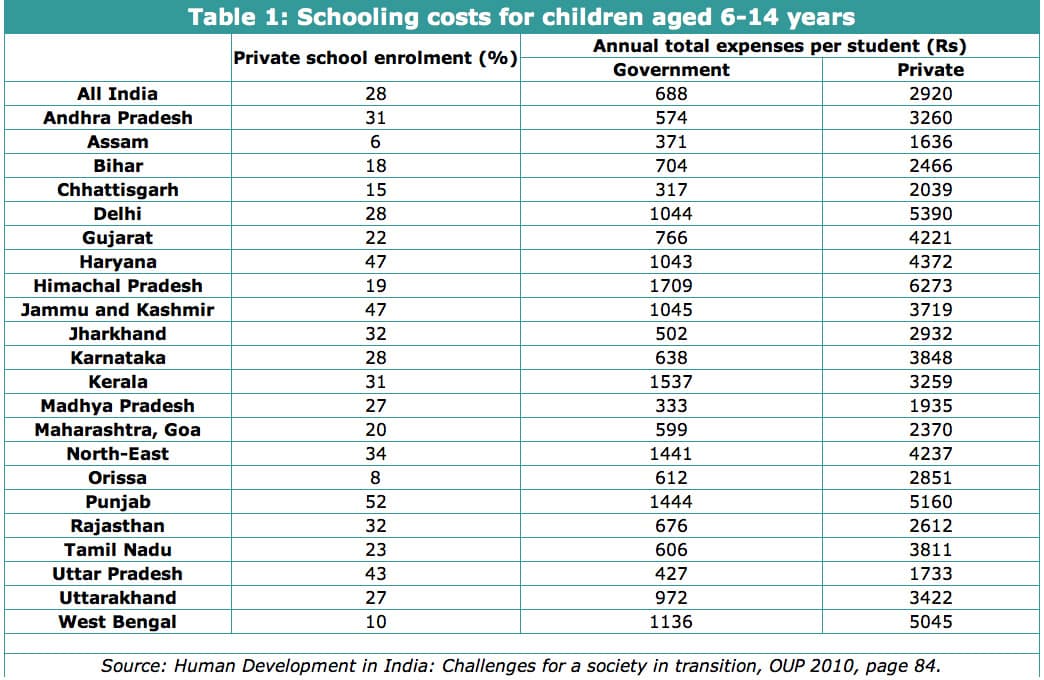 What is clear from the table is that per capita expenditure is a critical variable in affecting quality.  Thus Kerala, which is generally acknowledged to have a good government schooling system, has one of the highest per capita spending values.  The highest was found in Himachal Pradesh, which is one of the great recent success stories of school education; it has achieved universal and good-quality school education despite being a relatively less wealthy State that has to deal with difficult terrain and logistical constraints.  The table reinforces the point that to ensure quality, raising the level of public expenditure in education is absolutely essential.  All this is especially important now that the right to education has become enshrined in law.  If the Central government is really serious about this, it must put its money where its mouth is.