The Consumer Price Index declined 0.2 percent in June — the first fall in the broad measure since a 0.2 percent drop in June of last year.  The headline rate of inflation has declined steadily since peaking in March, but the decline is driven almost entirely by food and particularly energy prices.  The latter fell 4.4 percent in June following a 1.0 percent fall in May.  As a result, headline inflation stands at 1.5 percent annualized over the last three months. 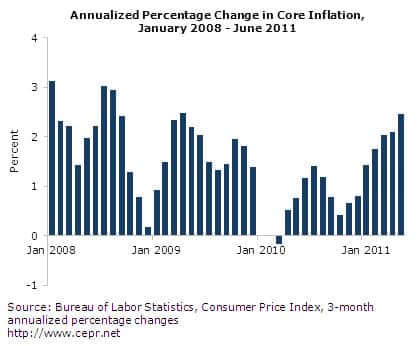 The price of owner’s-equivalent rent rose 0.16 percent in June — the largest such rise since March of 2009.  Rent proper, which had been rising faster than owners’-equivalent rent, increased only 0.11 percent in the month.  This reversal likely reflects savings in energy costs, which spill over into rent prices.  Both measures of housing rent are quite low — showing 1.2 and 1.3 percent annualized rates of growth since March.

Falling gas prices pushed inflation in transportation down to -1.9 percent.  Public transportation, sensitive to energy prices, had been running inflation of 21.4 percent annualized from December to March, but has since fallen at a 9.5 percent rate.

The price of new cars rose 1.0 percent in June and has now run at a 10.1 percent annualized rate over the last three months.  As discussed previously, this is in part a seasonal adjustment problem attributable to later rollouts of the new models, and there has been some supply disruption due to the tsunami in Japan.

The price of used vehicles — though not directly affected by the same issues — has increased at a 16.8 percent annualized rate since March.  However, the delay in rollout means that consumers holding out for a 2012-model vehicle have withheld their current cars from the used market.  Thus, there are bound to be considerable spillover effects that may be reversed over the second half of the year.

Producer prices for finished goods fell 0.4 percent in June.  This is the fourth consecutive month of disinflation in the headline Producer Price Index as energy prices slowed and fell — the latter down 2.8 percent last month.  The price of core finished goods rose 0.3 percent in June.  Since January, this category has run a steady 3.2 percent annualized rate of inflation.

While the fall in energy prices has brought down headline inflation, core rates remain modest, if above recent lows.  With pressure slackening as evidenced by disinflation in producer and trade prices, there is little reason to expect rapid price gains.  Of much more concern is the weak growth in hourly wages.  Relative to core prices, the average wage is only up five cents per hour in the last 30 months.  This 0.1 percent annualized rate of real wage growth leaves little optimism for households’ ability to pay off their debts and reignite the economic engine.

David Rosnick is an economist at the Center for Economic and Policy Research in Washington, DC.  This article was first published by CEPR on 15 July 2011 under a Creative Commons license.