After two months of falling energy prices, a large rebound again drove up the overall rate of inflation.  There is not much to be made of this volatility.  Energy prices rose 2.8 percent in July, but have fallen at a 10.4 percent annualized rate over the last three months.  Food prices rose 0.4 percent in the month and at a 3.8 percent rate since April — slightly faster than the core rate of inflation. 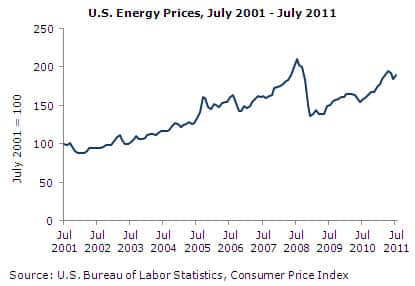 Among core goods and services, there was a noticeable jump in rent and owners’ equivalent rent.  Each rose 0.3 percent in July.  For owners’ equivalent rent — which comprises nearly one-third of the core index of prices — this was the largest single-month increase since November of 2008.  Over the last 12 months, prices have increased 1.2 percent — below the already very modest 2.0 percent rate of core non-shelter inflation over this time.

Elsewhere in core prices, the rapid price gains in new and used vehicles slackened considerably last month.  New vehicle prices remained unchanged after increases of 0.6 percent in June and 1.1 percent in May.  As discussed in previous reports, the increase in vehicle prices reflects later release of the 2012 models and supply problems in Japan.  Inflation in used cars and trucks should continue to slow along with that of new vehicles, and at 0.7 percent in July, is at its lowest rate since February.

Medical care prices rose 0.2 percent for the third consecutive month.  Over the last three years, inflation in medical care has run at 3.2 percent annualized.  From the middle of 1997 to the middle of 2008, no 12-month period had shown medical care inflation of less than 3.4 percent.  However, medical prices continue to run much faster than core prices generally — the latter having risen 1.8 percent in the last year and only 0.9 percent the 12 months before that.

The producer price of core intermediate goods continued to show slowing inflation — now 0.2 percent in July — the lowest rate since last August.  The more volatile index for core crude goods rose 0.7 percent last month after a 1.1 percent rise in June and a fall of 0.9 percent in May.  Crude energy prices fell 2.6 percent — the third consecutive monthly fall — and crude food prices fell 0.8 percent after a 2.1 percent rise in June.

Non-fuel import prices rose 0.2 percent in July after last months’ fall of 0.1 percent.  These prices have risen at a 2.4 percent annualized rate over the last three months — the lowest rate since the three months ending in September of last year.  Both core import and export price inflation has become restrained in recent months.  Core import prices rose 0.2 percent in July, while export prices fell 0.1 percent.

Though the headline rate of inflation rebounded on a bounce in energy prices, the fall in crude energy prices makes it less likely that this inflation will continue in the months to follow.  Core inflation remains low despite volatility at earlier stages of production.  Despite some moderation in trade prices, the Federal Reserve’s real broad dollar index fell to new lows in July.  While this may bring price pressure on imports to the United States, this should also lead to rising export prices.  In turn, the modest increase in inflation should lead to a rebalancing of trade, which will be of benefit to the sagging economy.

David Rosnick is an economist at the Center for Economic and Policy Research in Washington, DC.  This article was first published by CEPR under a Creative Commons license.