The Institute for Women’s Policy Research (IWPR) has released not one, but two, major research reports today.  Both analyze rising economic insecurity and draw on the findings from a large survey commissioned by IWPR and the Rockefeller Foundation in the fall of 2010.

The first report “Women and Men Living on the Edge: Economic Insecurity After the Great Recession” (pdf) is a comprehensive overview of widespread economic hardship, a situation that has continued almost unabated despite the official end of the recession in the summer of 2009.  The official statistics tell us that the unemployment rate hovered around 9 percent in the fall of 2010.  The IWPR/Rockefeller survey reveals this figure to be only the tip of the iceberg: more than one-third of respondents “reported that they or someone else in their household had been unemployed and looking for work for at least one month during the previous two years.”

The survey provides many other extensions of the existing official statistical record of the downturn: whether families have savings for emergencies, their children’s education, or their own retirement (a large share do not); whether families have had difficulty paying food, health care, housing, utilities, or credit-card bills (a large share do); whether adults were willing to learn new skills, increase the length of their commute, or take a pay cut to escape unemployment (a large share would). 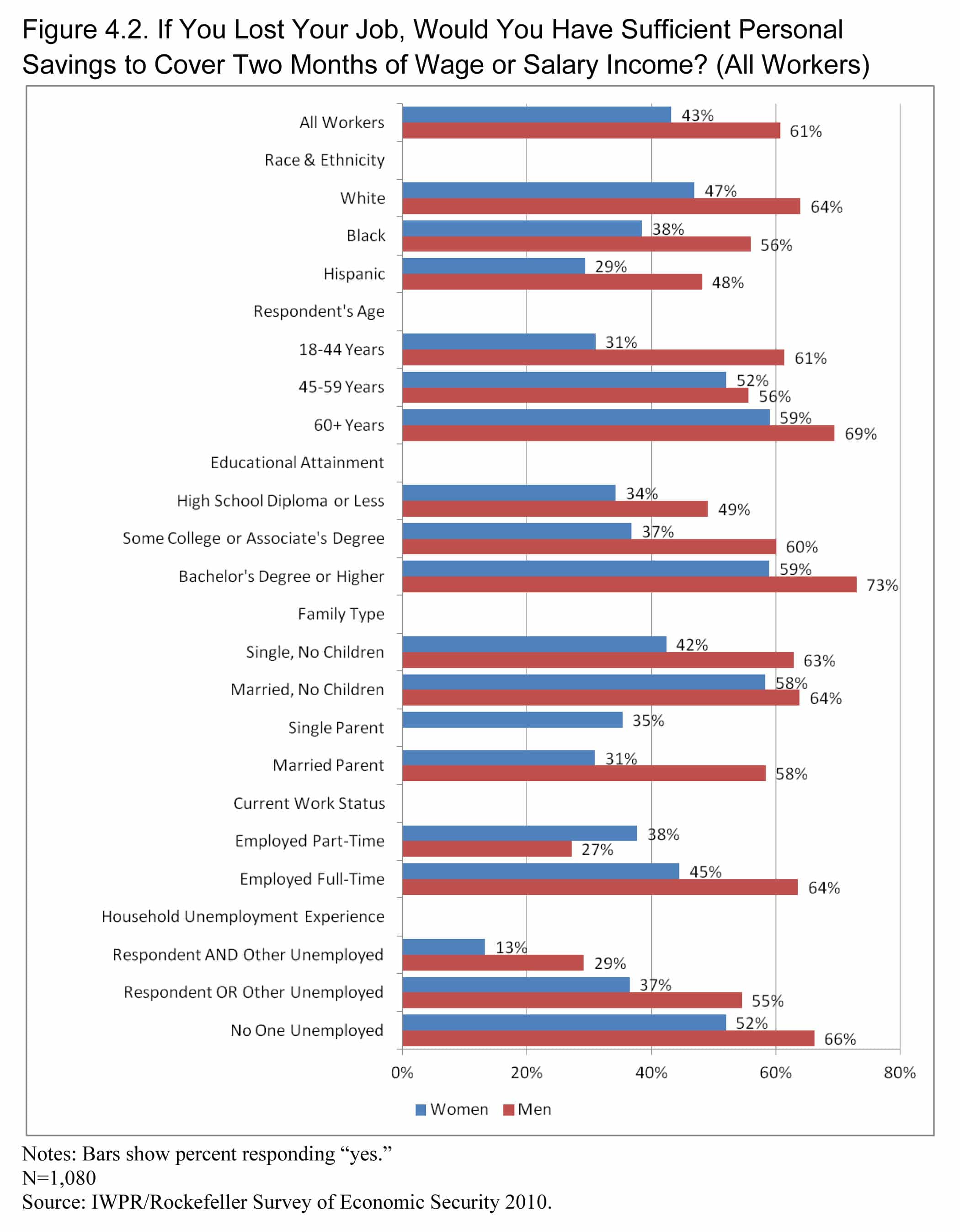 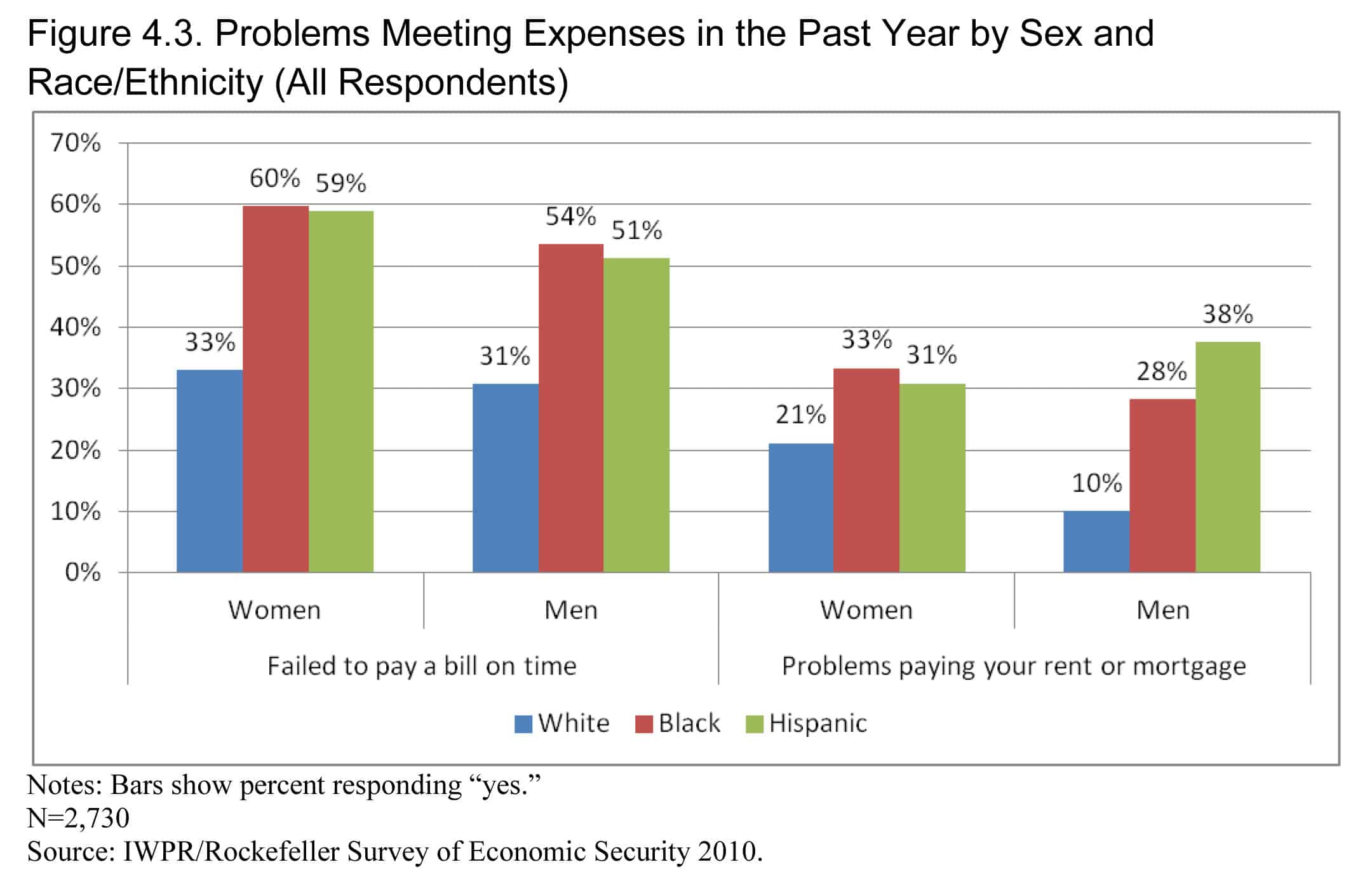 Of particular interest are findings around the availability of paid sick days and employer policies concerning wage secrecy, two topics that have been in the news a lot over the last several years.  With respect to paid sick days, over 40 percent of women and men said that they risk losing their jobs for missing work, regardless of the reason.  Almost one-in-four mothers (but only about one-in-fourteen fathers) report having “sent a sick child to school or daycare because they could not take time off from work.”

The survey also found that wage secrecy — the kind of circumstances that perpetuated discrimination against Lilly Ledbetter when she worked at Goodyear — is widespread.  About half of respondents said that “the discussion of wage and salary information is either discouraged or prohibited and/or could lead to punishment.” 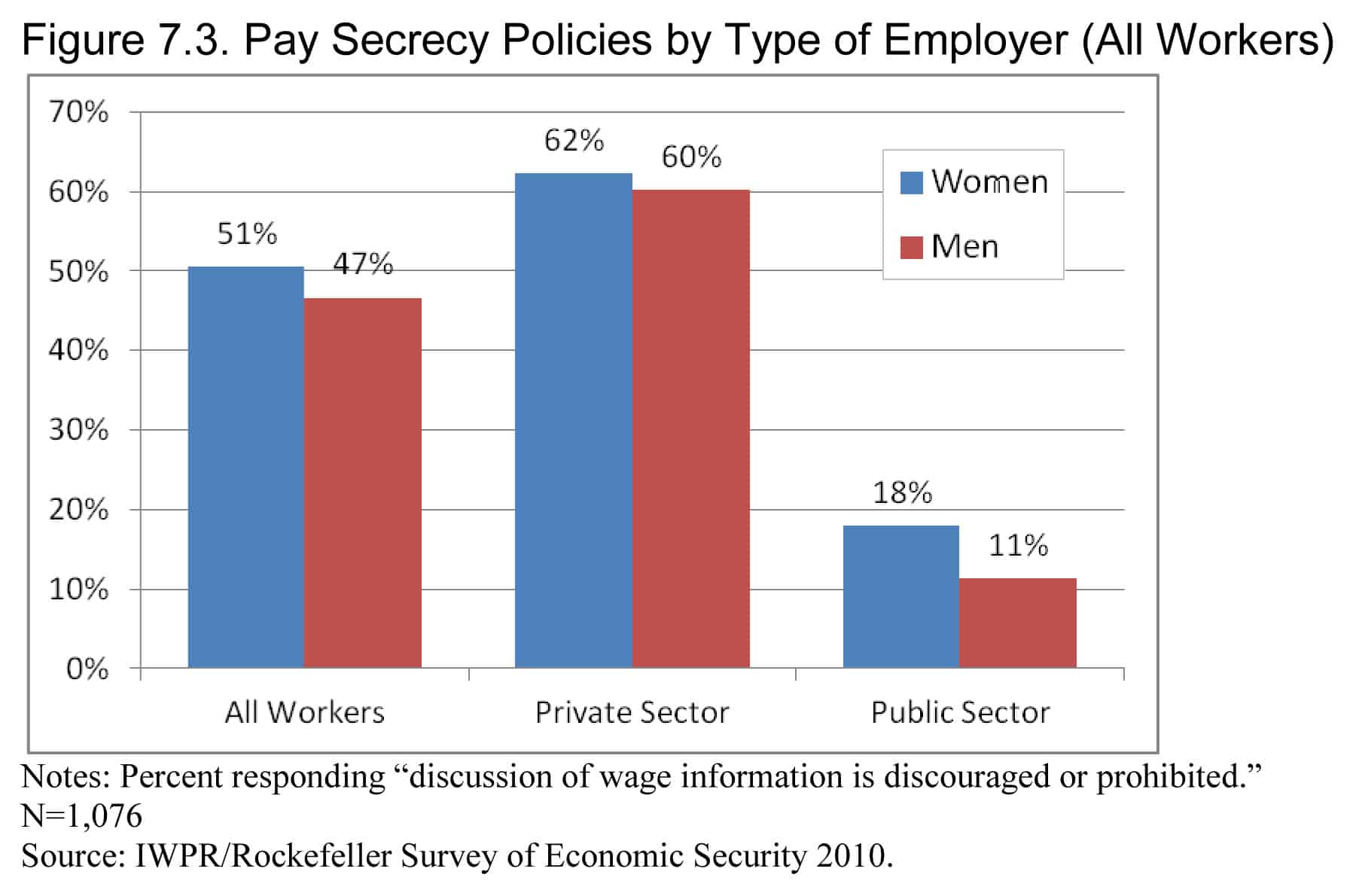 The downturn has often been called a “man-cession” because initially so many men lost their jobs, especially in construction.  Nevertheless, the survey found that “women generally report more financial difficulties, lower economic expectations, more pessimistic perceptions of the economy, and greater experiences of hardship than men.”

The second study “Retirement on the Edge: Women, Men, and Economic Insecurity After the Great Recession” (pdf) focuses on issues surrounding retirement security, a major casualty of the economic downturn.  According to the IWPR/Rockefeller survey, almost half of women and more than one-third of men “have little or no confidence” that their assets will last through their retirement.  Only one-third of adult women reported having at least $20,000 in stocks, bonds, or mutual funds and only four-in-ten had at least $20,000 in an IRA or similar plan.  The numbers for men were only marginally better.  Given this scarcity of retirement savings, it shouldn’t be surprising that the survey finds large shares of men and women believe that Social Security benefits should be increased — and say they wouldn’t not mind paying higher taxes in order to strengthen the program.

John Schmitt is a senior economist with the Center for Economic and Policy Research in Washington, DC.  This article was first published in the CEPR blog on 3 October 2011.