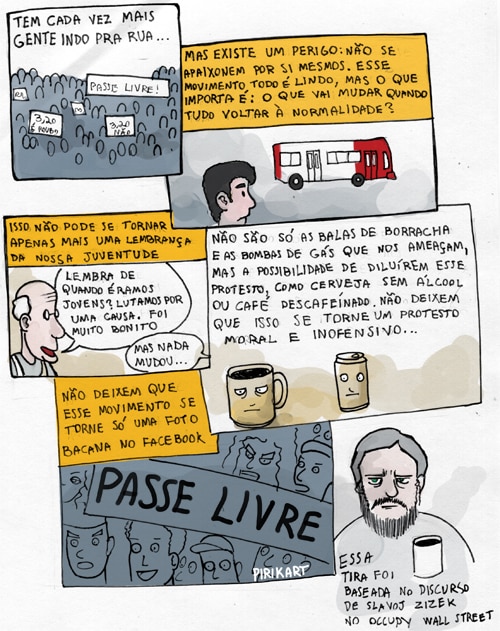 But there is a danger. Don’t fall in love with yourselves. This movement is totally beautiful. But what matters is: What will change when everything gets back to normal?

This cannot turn into another memory of our youth: “Remember when we were young? We fought for a cause. It was so beautiful”; “But nothing changed . . .”

It’s not just rubber bullets and tear gas canisters that threaten us, but the possibility that they will dilute this protest, like beer without alcohol or decaffeinated coffee. Don’t let this turn into a harmless, moral protest. . .

Don’t let this movement turn into another cool photo on Facebook.

This comic strip is based on Slavoj Žižek’s speech at Occupy Wall Street.1 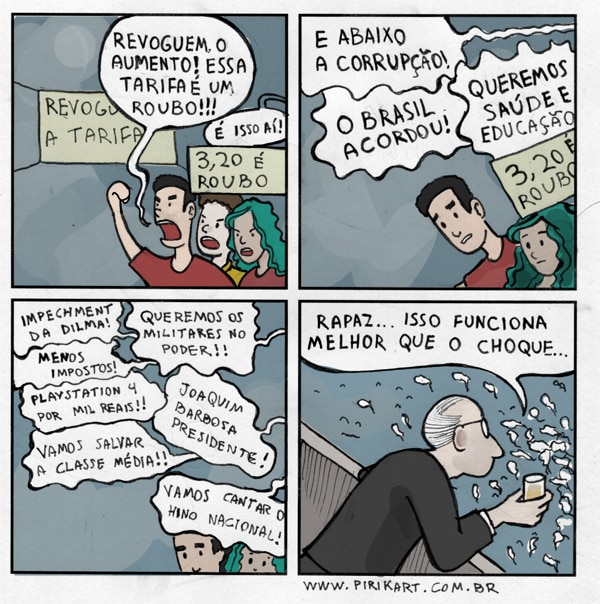 Free Pass Movement Activists: “Revoke the hike! This new fare is a robbery!”

Newcomers to the Protest: “Bingo!”

More newcomers: “And down with corruption!”; “Brazil has awoken!”; “We want health and education!” 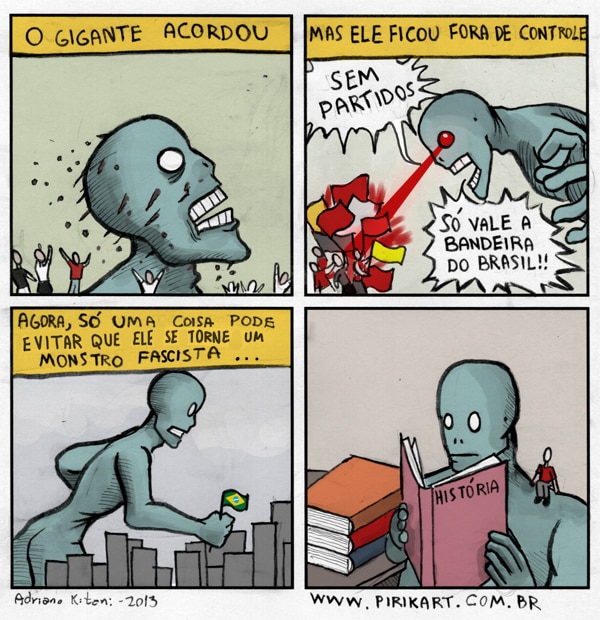 But he went out of control: “No political parties!  Only the flag of Brazil!”

Now, only one thing can prevent him from turning into a fascist monster —

that is, getting him to learn from history.

1  When I read Žižek’s speech I found various interesting points, which also apply to what is happening now in Brazil. I adapted some points to this context. Those who wish to take a look at the whole speech can access it at takethesquare.net/2011/10/11/zizek-at-wall-street-%E2%80%9Cdon%E2%80%99t-fall-in-love-with-yourself%E2%80%9D-occupywallstreet-ows/. — Adriano Kitani

2  Guys, beware of a mashing up of the movement. This is more dangerous than a Shock of Order. Increasingly I have seen superficial or reactionary demands that are diluting the movement. — Adriano Kitani

Adriano Kitani is a Brazilian artist. These comic strips were published at www.pirikart.com.br on 17, 19, and 22 June 2013 under a Creative Commons license. Translation by Yoshie Furuhashi (@yoshiefuruhashi | yoshie.furuhashi [at] gmail.com).