Every year the Rhine region and southern Germany go crazy.  Carnival or Fasching, a cousin of Mardi Gras, officially beginning at 11:11 AM on 11/11 and ending with the Lent period, has been celebrated in Catholic areas since the 1820s — with wild costumes and often wild conduct.  Many cities have a special “Women’s Day,” marking an 1824 washerwomen’s revolt, when women can storm city halls, cut off men’s ties, and kiss any man they want.  On the last Monday, “Rosen Montag,” this year February 16th, parades in the major strongholds of idiocy, Cologne, Dusseldorf, and Mainz, feature elaborate floats mocking headline figures like Barack Obama, Vladimir Putin, Angela Merkel, or Sigmar Gabriel, wittily but mostly harmlessly.  After Tuesday’s alcoholic conclusion comes Ash Wednesday and proper German sobriety with, for the pious, no meat, schnapps, or other pleasures until Easter in April.

Some cities in the largely Protestant north try to join the Fasching fun but can rarely turn into fools for that final week, as required.  An exception, for some reason, is northern Braunschweig.  But this year it canceled its usual costume parade; the police claimed to have uncovered a terrorist plot.  In general this year the Charlie Hebdo and Copenhagen killings have led to a degree of anxiety.

These brutal murders inevitably fostered more discussion both on anti-Semitism and on the pervasive “Muslimophobia,” already so widely debated due to the bigoted PEGIDA “walks” and (in all but Dresden) the stronger anti-PEGIDA, anti-fascist counterdemonstrations.  Will the awful events in Paris and Copenhagen tip the scales in the direction of more hatred — in all directions?  A renewed evening “walk” was again held in Dresden last Monday, with a rather reduced count of 4,000 participants, but plans are afoot to run a PEGIDA candidate for mayor in June.

There was discussion among Jewish citizens of France and Denmark on possibly migrating to Israel, spurred on by Prime Minister Netanyahu (perhaps in as close a link to his election campaign as his planned speech to the US Congress — without telling Obama).  But this was hardly raised in Germany.  A large section of its Jewish community had already migrated — from former Soviet republics — or even, especially with young people, away from Israel!  Luckily, Germany has seen few noteworthy incidents recently which indicated anti-Jewish sentiment (a few exceptions reflected events in and around Palestine, especially Gaza, which certainly have affected thinking here).  Movements like PEGIDA direct their bigotry mostly against Muslims and people of color, a larger, more conspicuous, hence easier target, and they often get new stimuli from the more rabid media.

Of course the acts of the fanatics in Paris and Copenhagen, like the crimes of ISIS, have certainly been very disturbing.  Fanaticism, often tied not just to religion but to strong nationalist feelings and frequently arising in areas of social injustice and oppression, is brutal and bloody whatever its roots, and almost invariably worsens any evils which a fanatic with a murderous weapon may have wanted to revenge.  The Nazi-based murders of nine men of Turkish background, a Greek-German, a policewoman and a nasty bomb explosion in a Turkish neighborhood, all between 2001 and 2007, are still being investigated as the trial of those involved drags on, while there are continuing indications that government intelligence and police authorities, despite their many spies, preferred to wrongly blame not extreme right-wingers but rather other Turkish immigrants for the crimes.

Freedom of speech and of the press, also hotly debated after the Paris and Copenhagen killings, are causes worth fighting for, including the right to publish almost anything.  But insulting and dismaying countless millions, ridiculing their deepest-held beliefs, is a questionable use of such rights.  In today’s so very tense world it comes perilously close to that old question: Is yelling “Fire” in a crowded theater an acceptable use of the right to free speech?

Moreover, when a handful of corporate or family giants control a huge slice of the media in a country, mostly with a one-sided, usually right-wing slant, some skepticism about their defense of free press expression may be permissible.

Two cases of one-sided media domination in recent weeks are of immense importance.  One is the ceasefire and possible easing of the conflict in the Ukraine before the warrior caste in Washington and its willing protégés in Eastern Europe and Germany push through plans to arm the Kiev gang and provoke an ever more threatening conflict with Russia.  For a while it seemed strangely appropriate — for many for the first time — to praise Merkel thanks to her attempts, with François Hollande and Putin, to patch up a temporary or even a more lasting peace.  Were Western Europe and Berlin really resisting domination by Washington?  German policy remained torn between buckling under or pursuing an independent policy more favorable to European interests — and to peace.  Regardless, most of the media kept at it in their attacks against Putin.

Any possible applause for Merkel & Co. was soon muffled by the hard-nosed stand against attempts by the new Greek government to resist European economic and political pressure, which aims to keep it on the straight, very narrow path of starving its population to meet the demands of fat, over-wealthy bankers.  German Finance Minister Wolfgang Schäuble was sounding (if not looking) ever more like Count Dracula in his demand for blood.  How many jobless Greeks lost health insurance or how many desperate men committed suicide clearly interested him less than preventing a socially-minded, left-leaning government from having any success.  For Greece, it was no matter of carnival fun followed by voluntary self-denial but rather a rejection of five years of imposed deprivation.  For Schäuble it was stopping in its tracks the very trend against which the European Union was directed — before it spread via Podemos to Spain, far larger than Greece, or to other members of the Union.  He was aided by media which kept mocking those “lazy, inefficient,” and so very stubborn Greeks.

Both issues are still cliffhangers.  There are many fears and hopes — and no doubt prayers — as to their outcome.

In Hamburg, many of the hopes or prayers are now forgotten; state elections are over and done with.  While Merkel’s Christian Democratic Union (CDU), blessed with her calm manner, smiling face, and relatively stable economy, still rides high in all-German polls, it suffered its worst defeat in decades in this northern port, Germany’s second largest city.  Its local candidate was swamped.  His main contender, the Social Democrat Olaf Scholz, a quiet, unimpressive fellow, well to the right within his party, is still favored by a large number of the voters (who must unfortunately be called Hamburgers).  This, too, defied national polls, where his SPD party is still mired down at about 25 percent while the CDU gets over 40 percent.  It seems the large cities lean towards the SPD.

But since the SPD just missed 50% it needs a partner to obtain a majority in the city-state government. Scholz will most likely choose the Greens rather than the Free Democrats (FDP), the right-wing party which was saved from threatened oblivion by finally winning back a few seats in a state legislature.  Some opponents, immediately accused of sexism, said (more vulgarly) that this was only because their main candidate was so very attractive.  But it seemed that not looks but personal style did play a role; the right-wing Alternative for Germany (AfD), with a more moderate, seemingly sagacious leading candidate than their average, managed to win their first seats in a German legislature in the former West Germany.

Last but definitely not least, the Linke (Left), with the more elderly (65), dignified, but forceful science teacher (and ceramics artist) Dora Heyenn as main candidate, was able to gain two full percentage points over results in the last election, representing a growth by a third in strength.  In Hamburg’s St. Pauli district, known both for its Reeperbahn red-light district and its politically progressive but not very successful soccer team, the Linke even came in first (probably not especially with the votes of soccer athletes or sex workers).  Truly encouraging; in a city-state where youngsters of 16 and 17 can now vote, 12% of voters between 16 and 24 and 11% of those between 24 and 34 voted for the Linke.  This showed that the Linke could indeed move ahead, also in West German areas, when it fought a constant battle for the rights of all the people in the city, native and immigrant, far more consistently than any other party.

Thus, even in comparatively sober northern Hamburg there was cause — if not for wild abandon as in Cologne or Mainz — still and all for some grateful joy and satisfaction.

The Election Results in Hamburg (and change from 2011 election) 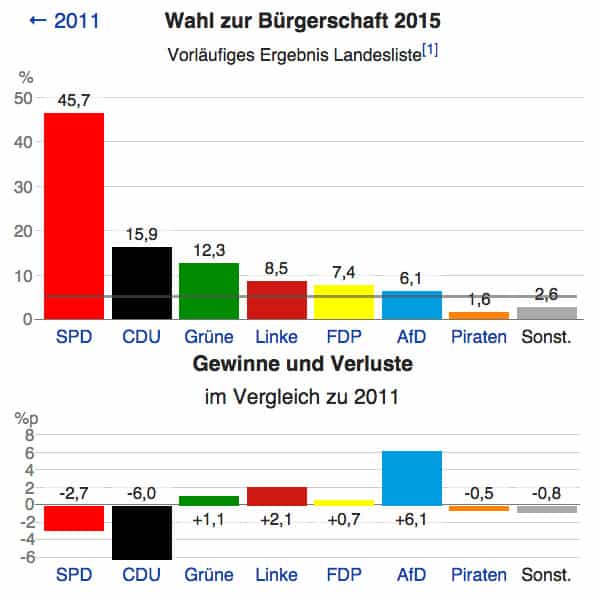