Key conclusion of Anthropocene Working Group report to Geological Congress: the “Great Acceleration” in the second half of the 20th century marked the end of the Holocene and the beginning of a new geological epoch.

The evidence is overwhelming: earth entered a new geological epoch in about 1950.  In an official report to the International Geological Congress, the Anthropocene Working Group made that case, and proposed to move towards official adoption in the next 2-3 years.

Colin Waters, secretary of the AWG, told the press: “Being able to pinpoint an interval of time is saying something about how we have had an incredible impact on the environment of our planet.  The concept of the Anthropocene manages to pull all these ideas of environmental change together.”

All but one of the AWG’s 35 members agree that the Anthropocene is “stratigraphically real” (one abstained) and 30 agree (2 opposed, 3 abstentions) that the new epoch should be formally added to the Geological Time Scale. 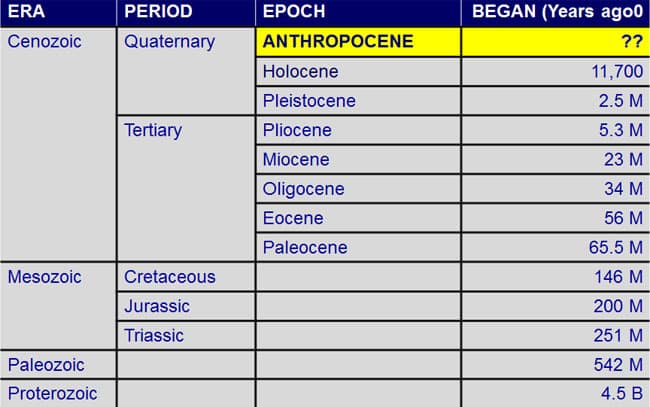 If approved, the Anthropocene would become
the newest epoch in the Quaternary Period.

The AWG will now shift its focus to identifying a global “signal” that coincides with the change.  Ten of the AWG’s members favor using plutonium fallout from nuclear tests as the signal, but there are many other possibilities.  Once a signal is agreed on, they will determine a “golden spike” (properly, a “Global Boundary Stratotype Section and Point”) — an actual location in rock, sediment, or ice strata, somewhere on earth, that would physically define the onset of the new epoch.

Formal approval is not automatic — the ICS and the IUGS are conservative bodies and can take years to act — but there is now no doubt that the Anthropocene is real and it is here to stay.

The following summary was released just before Dr. Colin Waters of the British Geological Survey began presenting the AWG’s report to the International Geological Congress on Monday, August 29.

Ian Angus is editor of the ecosocialist journal Climate & Capitalism.  He is co-author, with Simon Butler, of Too Many People?  Population, Immigration and the Environmental Crisis (Haymarket, 2011), and editor of the anthology The Global Fight for Climate Justice (Fernwood, 2010).  His latest book is Facing the Anthropocene: Fossil Capitalism and the Crisis of the Earth System (Monthly Review Press, 2016).  This article also appears in Climate and Capitalism today.