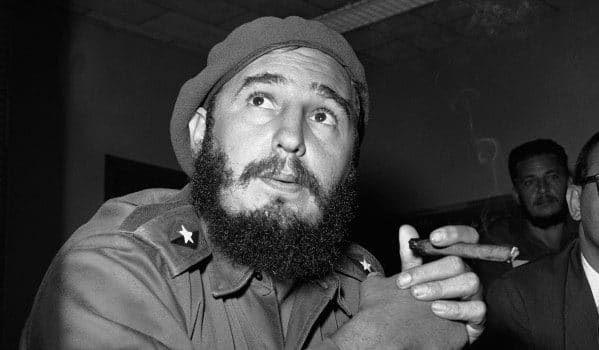 Dear Fidel, I do not want to talk about you but rather talk to you, because you are still here among us and will be forever.

I apologize for addressing you informally, but I feel so close to you that I need to do so.

You know that Cuba is my second homeland, a country that embraced me and thousands of my compatriots with open arms when we were being persecuted in Chile for trying to build a humanist society of solidarity inspired by your teachings. And you know that I was able to build a happy home in your country with one of your most faithful comrades.

Fidel, you have served as a source of encouragement and inspiration for the people of Latin America and the world.

Politics as the Art of Making the Impossible Possible

Against the fatalism that reigned within the left of that epoch, you demonstrated it was possible to defeat a regular army despite the sophistication of its weapons. Using the guerrilla tactic of attacking the enemy by surprise at its weakest points, you carried out victorious operations that weakened its military force and, above all, sapped its morale.

Your great historic merit is having being able to clearly define the decisive link that would make it possible to grasp the entire chain and, by doing so, give victory to the revolution; and the decisive link was none other than the struggle against the dictator Batista and the regime he personified. You saw clearly the need to unite the broadest range of social forces to overthrow this tyranny. It was not enough to only consider working with revolutionary sectors—it was necessary to bring together reformist sectors and even those reactionary sectors that had minimal differences with the dictator.

What you admired in Martí was not so much the feats he accomplished on the battlefield as the gigantic feat of uniting Cubans for the struggle. You were convinced that without this Cuba would still be a Spanish colony or a satellite of the United States.

And to achieve this broad unity you had to give ground on programmatic questions.

In the Moncada program (October 16, 1953) you only proposed “bourgeois democratic” measures, and even though you put forward proposals that affected US interests, you never made a formal anti-imperialist declaration. Later, in the Sierra Pact (July 12, 1957), the result of an agreement between the representatives of the bourgeoisie and the rebels in the Sierra, neither the workers’ sharing in the profits of enterprises nor the peasants’ sharing in the sugarcane yield was mentioned. There was also no talk of confiscation of ill-gotten properties and nationalization of electricity and telephone trusts that together with the consistent application of an agrarian reform would become de facto anti-imperialist measures—the measures that were part of the Moncada program. Finally, in the Caracas Pact (July 20, 1958), the minimum program was reduced to its most essential elements: punishment for the guilty, defense of workers’ rights, order, peace, liberty, compliance with international commitments, and the pursuit of the economic, social, and institutional progress of the Cuban people.

However, you never gave ground on the fundamental questions, those that you thought could halt the development of the revolutionary process: you always repelled foreign intervention in the national struggle as well as a domestic military coup; and you always refused to build a front that excluded any of the forces that represented a section of the people.

No one struggled like you for the unity of revolutionary forces and the people.

You taught us that revolution is a war and that to confront it in better conditions it was best to have a united leadership capable of directing the battles, clearly defining the strategic enemy and the immediate enemy, the form that the struggle must adopt, the existing situation in which the struggle takes place, and the policies to follow to win over more and more supporters to the struggle against the immediate enemy.

But you also pointed out that the ideal is one thing and the reality another and that we have to start working with what we have at hand.

You taught us that we have to first seek the unity of revolutionary forces, and only after making an effort to do so did you propose pursuing broader unity. Nevertheless, you were not rigid in this regard: the failure to achieve that goal immediately did not stop you from advancing toward broader unity.

You insisted that we must begin by setting ourselves minimum goals, not maximum ones.

You pointed out that attempting to prematurely build unity among revolutionary forces, when the conditions for it did not exist, would only lead to a formal unity that could fall apart in the face of any adversary.

Understanding the ideological-political reality of Cuba, you preferred to avoid theoretical discussions, convinced that the application of a correct strategy would be more convincing than many words.

Another important point was that you were capable of correctly valuing the contribution of all revolutionary forces without establishing quotas of power based on the level of participation in the triumph of the revolution or the number of activists in the organization. You always fought against any “superiority complex.”

You insisted that the revolution had to come before anything that each of the organizations had done in the past, that what mattered was for all forces to work together for the future, and that is why you did not attempt to claim all the credit for yourself. Despite the fact that the 26th of July Movement was recognized by the immense majority of the people as the architect of the victory, you put aside the flag of your organization in order to raise the flag of the revolution.

How different would Latin America be today if we had taken your advice on board!

Against the fatalism of the international analysts of that epoch, you demonstrated that it was possible to begin building socialism despite being so close to the coasts of the biggest imperialist power in the world, and that it was possible to resist constant external aggressions despite their negative effects on the everyday lives of the people, because above all that was the dignity of a people that had conquered its right to make its own history.

Dear Fidel, we also learned from you how to speak to the people. It was not only necessary to speak with complete honesty but also use words that ordinary people could comprehend.

That is why you thought, in the midst of the McCarthyist and anti-Communist atmosphere that reigned in your country and the world, that it was absurd to make declarations of Marxist-Leninst faith. It was not declarations that were needed; what was needed was to act and demonstrate in practice the correctness of revolutionary positions.

That is also why you believed that the unifying factor of the 26th of July Movement could not be the Marxist-Leninist ideology, which had only been assimilated by the most advanced cadres of the movement; rather it had to be the struggle against Batista via a new, armed road, and this struggle had to lead to radical social transformations in the social as well as political sphere and the conquest of genuine national sovereignty.

Finally, we learned from you and the Cuban revolution that many of the dreams of revolutionaries cannot become reality, not because they are not good or noble ideas, not because of a lack of willingness in the ranks, but because the enemy—alerted to the goals pursued—forces us to take a different path. A good example of this was the initial desire of the Cuban revolution—once the war against Batista had ended—to transform army barracks into schools. You did not betray this beautiful ideal. It was the constant aggression of the US government that forced your country to postpone its realization and led you to build up the most powerful military force in Latin America relative to the number of inhabitants. The leadership of the revolution understood that preparing for war was the best way to avoid it.

I saw firsthand—when I first visited Cuba in mid-1960—how an army barrack in the Sierra Maestra had been transformed into a school. This was not the only ideal that had become a tangible reality at the time, as even in those early days another great characteristic of your revolutionary leadership was also evident: solidarity with all the peoples of the world. When the children at the school, who were 10 to 12 years old, found out that I was visiting them from Chile and that an earthquake had recently happened in my country, they told me that they were awaiting the arrival of a group of Chilean children to welcome them in Cuba while their houses, damaged by the quake, were being rebuilt. I will never forget that experience: it was so surprising to see how informed these young children were of what was happening in our countries and how a sentiment of solidarity toward the suffering of other peoples had awoken within them.

I also witnessed—years later—how in each building constructed by a micro-brigade in Havana the workers handed over one apartment to a Chilean family who was being persecuted by the Pinochet dictatorship.

These are just small anecdotes of international solidarity; there were also epics such as those about South Africa and Angola, where thousands of Cubans fought side-by-side with their African brothers and sisters to overcome the oppression suffered by their peoples.

To conclude, I want to say with all honesty that I did not always agree with all the measures you took or the ideas you proposed, but so many more are the ones that I shared that I do not think it is necessary for me to dwell on those now.

Fidel, I hope that you agree with me when I say that the best way to pay homage to you is to commit ourselves to make your battles ours, to walk in the same direction as you did. Then there will not be just one Fidel, there will be thousands, millions, and, sooner rather than later, great avenues will open on which free men and women will walk, building the humanist world of solidarity you dreamed of.

Marta Harnecker is a Chilean sociologist and activist. Her voluminous publications include A World to Build: New Paths toward Twenty-First Century Socialism (Monthly Review Press, 2015). The original article “Fidel, hoy y siempre” was published by Rebelión (7 December 2016) among other Web sites. Translated by Federico Fuentes and edited by Yoshie Furuhashi (contact: yoshie.furuhashi [at] gmail.com) for MRZine.