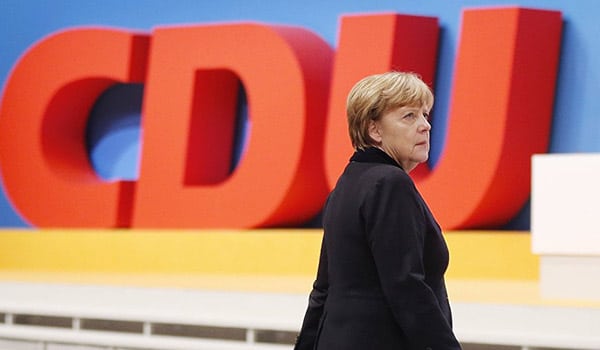 Those who, like me, grew up with the writings of A. A. Milne may recall not just Winnie the Pooh but two other little bears and how “one of them was Bad and the other was Good” and kept getting better.  In a way, that recalls German politics. The goodie in next September’s elections, it had seemed, would certainly be Angela Merkel with her two “Christian” parties, one in Bavaria, the other in all the other states. And despite scolding from her own rightists due to her refugee policy, now backtracking, she was well ahead in the polls, heading towards a fourth term.

Her main rivals, the Social Democrats, always seemed to get things wrong, like the poem’s “Bad bear” who “left all his buttons undone“ and whose “nicketies were terrible tore”. They plummeted – (not their nicketies (?) but their poll results). But then, as in the poem, “quite suddenly (just like Us), One got better and the other got Wuss.” A turnaround which seems to be echoing in Germany.

The reason for the sudden SPD upturn is simple; lack-luster party boss Sigmar Gabriel, 57, less popular by the day, withdrew as party head and chancellor candidate in favor of jolly Martin Schulz, 61, who, like one little bear, somehow “learnt his Twice Times Three” and managed within two short weeks to boost the Social Democrats from an almost hopeless minus of thirteen percentage points behind Merkel’s backers to a slim four point margin, an amazing jump. Achieved by cutting away at nearly all other parties, and with seven months left to go, this opened the door to all kinds of hopes and aspirations. More and more favored him, keen, fresh Schulz, over her, a tiring Merkel.

What made it possible? Martin Schulz has been in the European Parliament since 1994 and its president since 2012. That won him lots of TV time, but rarely about German politics. Unlike Gabriel, who was Vice-Chancellor and Economics Minister, he was never a visible part of the Berlin Establishment, which many German voters distrust as much as many Americans dislike pols from “inside the Beltway” in Washington. And Angela is the truest symbol of a German “Beltway”.

So, turning again to the children’s world, there was a game of Musical Chairs.* Schulz, followed as EU Parliament chief by one-time Berlusconi spokesman Antonio Tajani, was now free to replace Gabriel as SPD party boss and chancellor candidate. Gabriel then replaced Frank-Walter Steinmeier as Foreign Minister. And, on Sunday, Steinmeier will replace retiring Joachim Gauck as new German president, a largely ceremonious job and a largely ceremonious election, with 1260 delegates, all the Bundestag members plus an equal number of celebrities and minor dignitaries. The outcome is certain, since both coalition parties support Steinmeier, but there are other candidates, like Cologne Professor Christoph Butterwegge, 66, an expert on the fight against poverty, who will hardly get more than the votes of the LINKE (Left) who proposed him but who hoped that as a candidate he might get a genuine chance to present leftist views. He didn’t. Remember how the media treated Jill Stein?

But otherwise everybody except Angela Merkel should be happy. Or maybe not. Martin Schulz, with his bald head and clipped beard, looks nothing like stout Gabriel. But his program, as far as we can tell, is no different, and that is nothing to rejoice about. In fifteen of the past twenty years the Social Democrats were in coalition governments, as senior partners with the Greens or, like now, as juniors with Merkel’s Christians. They thus share responsibility for many or most of the measures so painful for working people, for those who lose their jobs, those needing medical care or a decent retirement. Germany, starting out far ahead of the USA in such matters, has been slipping downward in all of them – especially since the demise of the East German GDR in 1990. The SPD party (and the Greens) joined in Germany’s first military involvement since 1945, in Yugoslavia; it is now engaged in Afghanistan, Mali, Syria, Lebanon, and elsewhere. Germany used its economic and political weight in Europe to force devastating austerity pressures on weaker countries, all with the OK of the SPD. Martin Schulz has given eloquent, socially-conscious replies to interviewers’ questions on some topics, but has refused to say anything definite, not on a decent minimum wage, not on a fairer share of medical care expenses, not on higher taxes on the wealthiest. But what he doesn’t really say he really says so very well! And most of his party and many others just eat it up. At least for now!

He is even less clear about foreign policy but refused to oppose CETA and TTIP, the TPP equivalents. Far more worrisome, not just for Germans but for the world, is another matter he has not been quoted on. One thousand NATO troops from seven nations, with two more to follow, now stationed in Lithuania, 100 km from the Russian border, have been placed under German command. Hawkish Defense Minister Ursula von der Leyen, belligerent as always during her frequent trips to fire up the troops, said: “To prevent any danger arising from Russia is precisely the reason why we are here.”  In view of the lack of any threats from Moscow against the USA, which is organizing this entire rotation of military units all along Russian borders, or against Lithuania, or against Germany, it is hard to avoid a shudder at the memory of a not all too distant yesterday – involving Germany and Russia, also starting near here, and ending in the death of over 50 million human beings. Or to think of what some incident, provoked, accidental or misunderstood, might mean to the world tomorrow. (And some wondered what Washington would say to Chinese troops similarly stationed in Baja California with guns aimed at San Diego, perhaps citing as justification the US invasions of Libya, Iraq and its actions at the Chinese border to Afghanistan!

Little is said about this danger, not in the media and not in the words of those playing Musical Chairs. Their main worry today – to return one last time to children’s games – is how to avoid the economic and political results of “London Bridge is Falling Down” for the EU and possible copy-cat decisions after elections soon to be held in France, the Netherlands and Austria.

For the LINKE the changing scenery can also get dramatic. Current gains by the Schulz-SPD might indeed make it numerically possible to form a tripartite coalition after September. The SPD is still labeled “red”, so this would be a “red-red-green coalition”. The second strongest party in a coalition gets the job of Vice-Chancellor and either Economics or Foreign Minister, and with the SPD ahead, and the Greens and the LINKE about neck and neck, the possibilities are increasing temptingly, and so, too, may be some unspoken hopes.

But if the LINKE should enter such a government, what would happen to its strong pro-working class positions, to its “tax the wealthy” demands and, above all, to its rejection of any military involvement by Bundeswehr troops outside German borders? Both Social Democrats and Greens – whose right wings have grown stronger – would certainly demand LINKE compromise, dilution – and compliance, especially on military expansion! If this were granted, what would then remain of its genuinely left position?

The year ahead may become very complicated and difficult in many places on both sides of the Atlantic. Let us hope that it will become more peaceful!