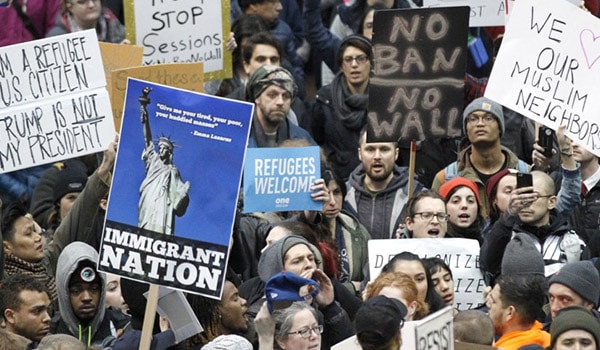 Do federal courts have the legitimate power to block Presidential orders concerning immigration and border control? Yes. Article 3 of the constitution gives them that power. In the current controversy, we should remind ourselves of this fragile and endangered separation of powers, on which we now rely as a bulwark against racism, bigotry and xenophobia. For a brief history, please see my article from 2014, here: http://scholarship.law.duke.edu/faculty_scholarship/3680/.

One of the stories in that article is about President Jefferson’s orders interdicting ships from entering and leaving East Coast harbors. His stated justification was to prevent US involvement in European conflict. Jefferson’s own Supreme Court pick, Justice Johnson, held that the President did not have the power he claimed. There was no internet, no Twitter, in those days. So Jefferson had his Attorney-General, Caesar Rodney, write a screed attacking Justice Johnson’s order. Johnson then penned a response, saying that he was reluctant to be drawn into public controversy.  However:

[W]hen a bias is attempted to be given to public opinion by the overbearing influence of high office, and the reputation of ability and information, the ground is changed; and to be silent could only result from being borne down by weight of reasoning or awed by power.    The case is In re Gilchrist. For more detail, see the article.

In 1993, John Demjanjuk had been acquitted in Israel, and released from his death cell. However, he had been stripped of his U.S. citizenship, and proceedings to overturn that fraudulent result, see Demjanjuk v. Petrovsky, 10 F.3d 338, were still pending. A government lawyer had said that Demjanjuk would not be permitted to enter the U.S. That lawyer expressed a hope that Demjanjuk would get to some country where they would “shoot him.” The 6th Circuit held that the government had no right to prevent Demjanjuk’s admission to the U.S., even though he was not a citizen. The ruling is at 1993 WL 394773.

The broader point here is that the government often invoked “national security” to shut off judicial review of executive action. The judicial response has not always been courageous. Learned Hand long ago warned us that “A society which has come to wince at such exposure of the methods by which it seeks to impose its will upon its members, has already lost the feel of freedom and is on the path towards absolutism.” U.S. v. Coplon, 185 F.2d 629.

The President possesses considerable power with respect to immigration, and that power is relatively wide when applied to aliens who seek entry into U.S. territory. However, even if an alien has no constitutional right to enter, the President cannot deny entry in a fashion that violates due process of law – a phrase that incorporates equal protection of the law as well. See Bolling v. Sharpe, 347 U.S. 497.  As the D.C. Circuit put the matter in Homer v. Richmond, 292 F.2d 719:

One may not have a constitutional right to go to Baghdad, but the Government may not prohibit one from going there unless by means consonant with due process of law.