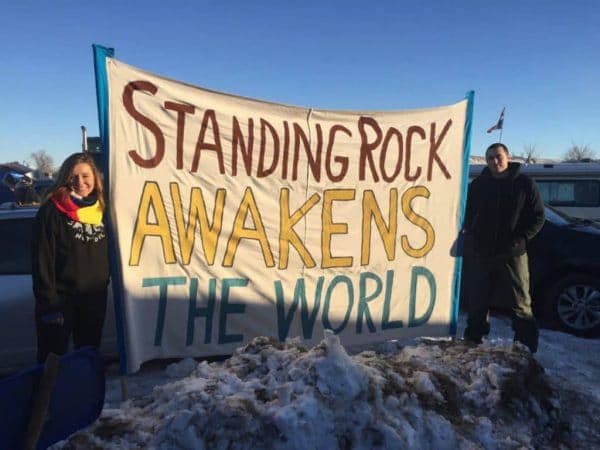 I wanted to share a short update from Standing Rock regarding a multitude of travesties that have occurred there this week. Unfortunately, things are only going to be getting more intense out there—both at Standing Rock and around the country. CLDC is about to hire a 3rd lawyer, a new organizer, and we will be gearing up to take everything up a notch….we will have your back if you are engaged in environmental, climate or social justice resistance. So right now, CLDC is one of the lead attorneys on the civil rights class action against the cops, we represent Sophia Wilansky (see below), we have taken on criminal representation for all the folks arrested on 11/15, and we continue to work every day with the Water Protector Legal Collective—including attempting to always try to make things better there and make sure that more radical resistance lawyering is present. Here is my short update on a few of the more important law-based issues that have come up regarding Standing Rock this week alone:

1) Trump was elected and sworn in. Nuff said. He signed an Executive Order pushing the climate denial greed and financial gain of his friends in the oil and gas industry, specifically pushing the Dakota Access Pipeline and the Keystone XL Pipeline—both climate travesties hurt communities, will not increase jobs, and endanger water and the environment.

(2) The Army Corps of Engineers has no backbone and caved to this unethical pressure and granted the final easement necessary by Energy Transfer Partners and DAPL without complying with federal law and without completing the required Environmental Impact Statement and review.

(3) The tribe has rushed into Court to challenge this repudiation of tribal sovereignty and binding environmental law, but it will likely be too late.

(4) Water protectors solemnly watched as the DAPL drills fired up from behind the militarized impenetrable bunkers that guard the drill site, and it is my understanding that as of this morning, drilling has commenced under the Missouri River.

(5) The Tribe continues to officially request that supporters and allies do not come back to Oceti Sakowin at this time. We hope for more information and rationale from the tribe soon.

(6) 74 Water Protectors were arrested on February 3rd, including former Congressional candidate Chase Iron Eyes, after they set up teepees at a new camp, “the Last Child” camp, which was located out of the flood plain where the current main camp sits. Iron Eyes and others were charged with felony inciting a riot, which carries up to a 5-year prison sentence if convicted. Overzealous cops once again subjected nonviolent water protectors to excessive force and then destroyed the new camp.

(7) A few days ago, US District Judge Daniel Hovland denied our request for Preliminary Injunction without even affording the parties a hearing on the matter, as is the normal practice in federal court. The case is the federal class action lawsuit, Dundon, et. al v. Kirchmeier et. al, that was filed after multiple law enforcement agencies violated Water Protectors civil and constitutional rights by using indiscriminate and excessive force on November 20th at the Backwater Bridge. Our client, Sophia Wilansky had her arm almost entirely blown off by law enforcement who launched a grenade directly at her, gravely injuring her. Dozens of other water protectors were also seriously injured by munitions, grenades and water cannons that were used on protestors for the first time since Selma, AL in the 1960’s. The conduct of law enforcement at Standing Rock has been deplorable, illegal, and one of the clearest violations of federal law that I have ever witnessed in the protest context.

(9) A federal grand jury was convened in Bismarck and at least one Water Protector, Steve Martinez, who drove Sophia from the bridge to an ambulance after her grave injury, was subpoenaed to testify. Steve immediately obtained attorney representation and has been resisting the grand jury at each step. He is next scheduled to appear in front of the grand jury on March 1st. You can never know for sure what the real target of a secret grand jury investigation is—cops/FBI are allowed to lie and they often do when it comes to the underlying basis for an investigation.

(10) Recently at least 3 water protectors have been contacted by FBI Joint Terrorism Task Force Officers (US Department of Justice, FBI, Joint Terrorism Task Force, Task Force Officer was the full title on the business cards they left). Agents appeared to have been attempting “knock and talks” where FBI shows up without a warrant or subpoena and hopes that people will consent to voluntary cooperation with the government. In each case, the Water Protectors did the right thing: they asserted their 5th Amendment right to remain silent, did not make any statements or conversation with the agents, and then immediately called a lawyer for representation. Any water protector who is contacted by law enforcement is welcome to call the CLDC and we will help you find excellent lawyer representation for free.

(11) Finally, for now, there are 3 water protectors who have been federally indicted and are facing very serious charges in federal court in Bismarck. These three people are being held by police in connection to water protection at Standing Rock, this information is from Water Protector Anti-Repression Crew.

Rattler is a Water Protector who is currently being held pre-trial on federal felony charges produced through a grand jury indictment. Rattler’s home is at Pine Ridge and he comes from a long legacy of struggle that he continued at Standing Rock against the Dakota Access Pipeline and its world. Please support Rattler as he fights these charges brought against him by the federal government. Rattler would love to receive your letters and cards of support.

Rattler loves fantasy fiction and Dungeons and Dragons material. He’d appreciate something to read while he is inside.
Michael Markus
Box 1416
Bismarck, ND 58502-1416

Red Fawn Fallis is still being held pre-trial on federal charges as well. Red Fawn has shown her dedication to the water, the earth and all that is sacred. Her spirits remain high despite the ways in which the state hopes to squash her. Please send your support to Red Fawn through letters!
Red Fawn Fallis
Stutsman County Correctional Center
205 6th St. SE, Ste 201
Jamestown, ND 58401

Charles Jordan has been held in Morton County Jail since November 17th, 2016 on three state felony charges. He was initially ineligible for bond and his current conditions of release set by the court are unable to be met at this time. His brutal arrest is not the only time Morton County Sheriffs enacted such violence on Water Protectors. We have received reports of continued mistreatment while in custody including lack of medical services and hygiene access for weeks at a time. Please send Charles a letter letting him know that he is not alone!
Charles Jordan
Morton County Correctional Center
205 1st Ave. NW
Mandan, ND 58554