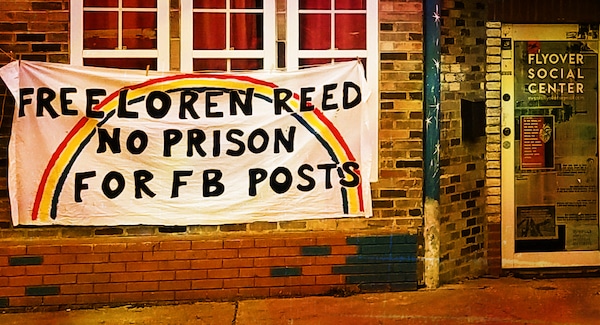 Loren Reed, a 26-year-old Diné (Navajo) man, is set for trial on May 4, 2021 for a trumped-up federal charge of “Threats to Damage and Destroy a Building by Means of Fire” after he engaged in a heated debate over Black Lives Matter protest tactics1 in a private Facebook chat group created to organize a local police brutality protest. Reed has been held in federal pretrial detention without bail for ten months after a prior high school acquaintance reported him to the police for a different satirical social media post about planning a protest or ‘riot’ at the courthouse that never actually happened. An undercover FBI agent then infiltrated the private chat group, and monitored numerous messages exchanged by Reed and his friends. After this intrusive monitoring of speech, and lacking any real evidence, Reed was quickly and violently arrested in his neighborhood on June, 2, 2020. Nothing incriminating was found during or after the arrest, despite officers thoroughly searching Reed’s home and even his housemates.

“This federal charge is unconstitutional because there was never a legally-justified ‘true threat’ contained in the posts that would remove the broad protections of the First Amendment that apply even to vitriolic or offensive speech,”2 said CLDC Executive Director Lauren Regan, one of the attorneys assisting Loren Reed on the case.

The supposed “threat” was never communicated to any target or victim, there was no intent to act or any evidence of an intent to act, and there is no lawful basis to federally prosecute someone for speech only–much less an Indigenous organizer confronting racism in a very conservative region of Arizona.

“Prosecuting someone in these circumstances takes us down the slippery slope of what is protected speech versus what is a ‘true threat’ justifying criminal prosecution. We must hold strong to the outer limits of the First Amendment or we all lose the right to freely speak our minds. Today the criminalized speech may pertain to Black Lives Matter protests, but tomorrow it could be religion, science, or other political beliefs.” Regan said.

Over the course of the next ten months, Reed was held without formal charge for a month in the Coconino County Jail, where he contracted COVID-19 and where his close friend had died the year before after being denied medical care.3 He was later transferred to a private for-profit federal detention center in Florence, Arizona, a polluted copper mining town turned prison industrial complex hub. Reed was not indicted with a crime until late September. His trial has now been delayed three times and is currently set for May 4, 2021.

The U.S. Attorney’s office blames the pandemic for the following nine months of additional detention in which Reed was denied a speedy trial– or even bail– and in which it filed three separate motions to ‘extend’ his case. However, that has not stopped the government from attempting to bury this miscarriage of justice by informally suggesting an oppressive plea agreement that would result in a felony conviction, and likely probationary sentence.

“For an Indigenous person who faces the reality of institutional racism in his daily life, being threatened with a conviction for a crime he did not commit is a precarious, life-devastating burden,” stated Klee Benally, a longtime Diné (Navajo) sacred lands advocate and organizer from Flagstaff, Arizona.

It is courageous of Loren to refuse to accept this atrocious deal. While it could free him from custody immediately, it would endanger organizers and activists in the future by further criminalizing speech. Loren is taking a powerful stand, and we need to stand right there with him.

Reed, a rapper who is known as a sensitive yet enthusiastic jokester, adamantly denies that there was any threat implied in his posts. Anyone reading them4 with an open mind would agree. And yet, the State wants to saddle a young Indigenous man with a felony conviction that will haunt him for the rest of his life.

“This is yet another attempt to control the speech and tone of a person of color amidst a year of heartbreaking–and increasingly fatal–racially-motivated police violence. Appallingly, in this situation the State has chosen to exploit a snitch’s biased complaint to police5 in order to further perpetuate this cycle of violence,” said Regan.

“We are calling on the federal prosecutor to immediately dismiss the charge in the interests of justice. Mr. Reed has already served over 10 months in pretrial detention for speech that did not actually threaten anyone,” she added.

“As Indigenous justice advocates, we stand with Loren Reed. The criminalization of Loren–and his right to free speech–is an ongoing violation of Indigenous rights and overall justice,” said Morning Star Gali of the Pit River Tribe, a lifelong Indigenous rights advocate with Restoring Justice for Indigenous Peoples who is currently based out of Sacramento, California.

“We also need to talk about the racism at play here,” said CLDC Attorney Sarah Alvarez.

Already, the feds are declining to prosecute, electing to charge petty misdemeanors, and/or negotiating lenient plea deals6 for the white supremacists that assaulted the U.S. Capitol on January 6. They have also entirely turned a blind eye toward the hundreds of far-right individuals who threatened politicians and police via social media. Meanwhile, an Indigenous man has been sitting in jail without due process for 10 months–all over a tongue-in-cheek social media post where no violence or property damage ever occurred nor was ever intended to occur. It’s difficult to prove this in court, but Mr. Reed’s case is a textbook example of race-based disparate treatment, and it needs to end with an immediate dismissal of the charge against him.

Reed is scheduled for a jury trial starting May 4 but there’s still time for the U.S. Attorney’s Office and the Department of Justice to do the right thing and immediately drop the charge to let him return to his life.