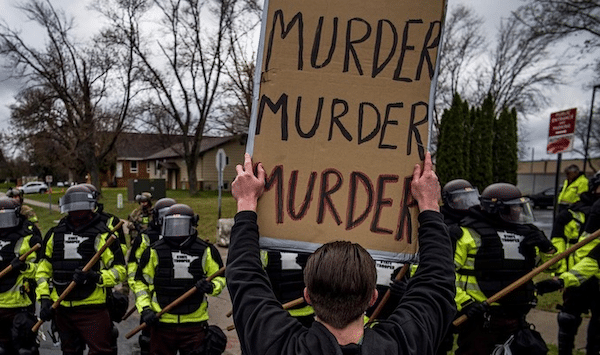 The Black-murder-by-cop next door to Minneapolis shows the world the dehumanization that is built into the white supremacist DNA of settler-colonialism will continue to produce crimes against our collective humanity.

The fix was in. The U.S. state was determined to demonstrate to the world that its system was able to render “justice” to its captive African/Black population.

So, unlike in the handful of cases where charges were brought against police officers for killing a Black or Brown person, the prosecutors this time did not pretend to follow the demands of the ill-informed public to bring charges of first degree or second-degree murder that would set a bar for conviction so high, it could not be met. That is a favorite strategy of prosecutors when conviction is not what they are looking for.

The prosecutors in the Derek Chauvin case did the opposite. They stacked the charges in a way that would make it impossible to escape a conviction. And everyone fell in line because the stakes were so high. Could the Shining City on the Hill, whose leadership was now associated with the “decent” Democrats, render justice for the killer of George Floyd? The answer to that question was going to be an emphatic yes. The press committed to gavel-to-gavel coverage and everything was ready for one the greatest show trials of U.S. history.

But the intractable, racist nature of the relationship between Black people and the U.S. settler-colonial state reared its ugly head again and everything went off script right in the middle of the international production. That is because another young Black male was gunned down, ironically in the same metropolitan area where Floyd’s life was snatched from him.

Everything was now confused again. What would justice mean for Floyd and any other Black individual murdered or assaulted by agents of the state even if Chauvin is convicted? Would the call for “justice” now just mean a demand for a trial since it is clear cases of Black murder will continue, as they have since the inception of this nation? Is that not what made the U.S. “exceptional” as the first republic ever established on the basis of race in human history?

The ruling class response to COVID-19 demonstrated how cheap life is in the United States, but the lives of Black people are even lower on the scale of human value. Yet, the charade continues. U.S. authorities gun down Black people in the United States, while its armies kill Black and other colonized peoples and nations around the world in the name of advancing democracy.

Everyone knows really that the murder of George Floyd was no more an aberration in U.S. society than the election of Donald Trump in 2016 was. Extreme, systematic, murderous violence has always been at the heart of the white supremacist settler project. The Chauvin show trial was just supposed to help us to forget that for a moment.

It did not matter that no one was held accountable for the murder of Freddie Gray, Breonna Taylor, Tamir Rice, or the now countless murders where local prosecutors failed to bring charges and the government under the Obama and Trump administrations made political decisions not to launch federal investigations.

This case was different. It could not be ignored or explained away. The world had seen the gruesome snuff film of George Floyd that evoked global revulsion. An inflection point had been reached in which the U.S. brand was potentially damaged beyond repair—so a sacrifice was required.

With the killing of Daunte Wright, a mistrial may not be the result and Chauvin will probably be convicted. That conviction, however, will not have the effect that the plan had originally imagined. Out of the confusion around what is to be demanded when the killings continue, is the slow awakening to the unavoidable reality that unless African/Black people are able to self-govern and exercise authentic collective self-determination, the degradation and dehumanization that is built into the white supremacist DNA of settler-colonialism will continue to produce Breonna Taylors, Eric Garners, mass incarceration, and crimes against our collective humanity.

And how do we shift that power? Malcolm X gave us a direction from the radical Black human rights tradition. He said you must be ready to pay the price required to experience full dignity as a person and as members of a self-determinant people.

And what is that price?

“The price to make others respect your human rights is death. You have to be ready to die… it’s time for you and me now to let the world know how peaceful we are, how well-meaning we are, how law-abiding we wish to be. But at the same time, we have to let the same world know we’ll blow their world sky-high if we’re not respected and recognized and treated the same as other human beings are treated.”  That outcome cannot be scripted by Hollywood or the state propagandists.