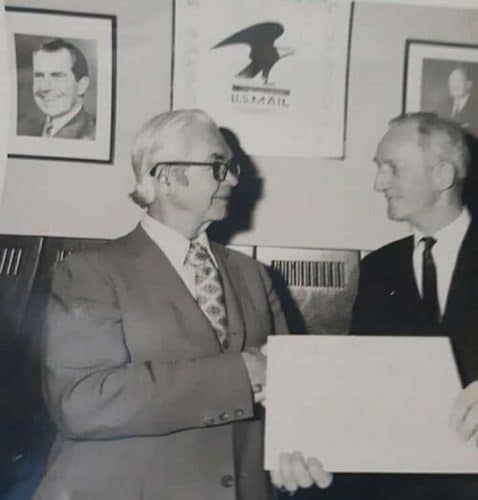 My maternal grandfather was born in 1914 and served in the Army during World War II. When he returned from the war in 1944, he took a job with the U.S. Postal Service as a “mailman.” He worked as a letter carrier, eventually becoming a supervisor, and was an active member of the Association of Letter Carriers for his entire 30+ year career. The job was a respectable occupation that supported a family of four and formed a large part of his identity and community of friends.

The USPS has favorable support from over 91% of Americans—unusually high for any other federal agency. Autocrat Trump, without filter as usual, recently admitted on Fox Business that he plans to starve the U.S. Postal Service of $25 billion in necessary funding that Democrats had proposed as part of coronavirus relief negotiations in a blatant admission that he is leading one of the most dangerous voter suppression attacks in our nation’s history. “They need that money in order to make the post office work, so it can take all of these millions and millions of ballots” come November, Trump said. “If they don’t get those two items, that means you can’t have universal mail-in voting because they’re not equipped.”

This is absolutely shocking—a U.S. “president” not only repeatedly appointing corrupt cronies to destroy the agencies they are appointed to run, but also purposely defunding and starving many critical federal agencies that support our democratic institutions (imperfect, but better than many). And many of these corporate thieves are overt in their intent. Louis DeJoy, appointed to the position of Postmaster General, has between 30 to 75 million dollars in assets derived from competitors of the USPS.(1)

The speed with which they are mobilizing to cripple the Postal Service before the election is even more shocking, especially when compared to the Administration’s inability to mount any effective coordinated response to the pandemic. Portland and Eugene, Oregon (where I live) have documented mysterious trucks showing up and removing mailboxes and mail-sorting machines from our mostly progressive and/or Democrat-leaning communities. Rural and/or low-income communities and tribal lands—places without widespread access to the internet—rely heavily on the USPS for affordable access to information, connections, and outside resources because private profit-driven corporations like UPS and FedEx won’t deliver. In addition to the threat on our right to vote this fall, gutting the USPS will also disparately impact the poor, the elderly, people with disabilities, Black and Latinx community members, incarcerated people and their families, as well as those living in remote areas, who rely on the USPS to deliver their medications, PPE, food and supplies during the pandemic, and other government benefits.

And like my grandfather, who began his lifelong career in the post office after he returned from war, the USPS continues to be the single largest employer of veterans in the United States. Trump is purposefully taking those jobs away from veterans and others during a Great Recession and record unemployment.

So. We all need to do something about this crisis. Here are a few suggestions.

And I know, the electoral political system ain’t perfect. The candidates aren’t thrilling to me either—but to have an authoritarian like Trump gut what semblance of participatory democracy we do have is a dangerous trajectory. And, as a lawyer, I have just two additional words to explain why even those who have never engaged in election voting must do so now: Supreme Court. The orange man with small hands is stacking the highest court in the U.S. with frat boy abusers and religious ideologues. The time for mere alarm has already come and gone.

As of August 17, the election is only 78 days away. In Oregon, the first mail-in ballots will be sent to the USPS for delivery today. The deadline to register to vote is October 13th, and October 20th is the last day to mail your vote in for the November 3rd election. Don’t wait—vote early this year!! Our future really depends on it.