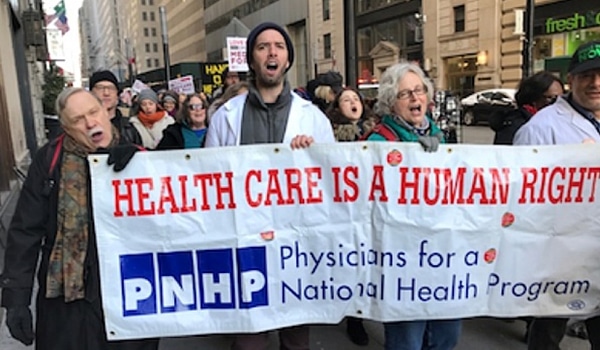 On Friday, House Republicans failed to muster enough support to pass the GOP healthcare plan, which some call Trumpcare. In response, Vermont Senator Bernie Sanders has announced he will soon introduce a bill to create a single-payer healthcare system. Several progressive groups are backing a single-payer system, including the Working Families Party, the Progressive Campaign Change Committee, CREDO, Social Security Works and National Nurses United. For more, we speak with Dr. Steffie Woolhandler, co-founder of Physicians for a National Health Program. She is a professor at CUNY-Hunter College and a primary care physician. She is also a lecturer at Harvard Medical School.

DR. STEFFIE WOOLHANDLER: Well, the Republican plan, which was defeated, was just a meaner version of the Affordable Care Act. Unfortunately, both of those acts have left the private insurance industry in the center of the healthcare system. And we actually need to get the private health insurance industry out. Their overhead and profits and the overhead that they impose on doctors and hospitals are costing us $500 billion annually that we do not need to be spending, $500 billion annually that we could save through a single-payer program, use that money to cover the 26 million Americans who now have no coverage, and then to improve the coverage of insured Americans, who often have insurance they can’t afford to use because of the high copayments, the high deductibles. Now, the deductibles and copayments, that’s a problem that predated Obamacare, but Obamacare failed to fix. And a single payer could eliminate that problem, as it has done in other countries.

DR. STEFFIE WOOLHANDLER: OK. Well, we have another election in 21 months. We have another presidential election in less than four years. Things can change. And so, we need to be thinking ahead. We’ve already seen a tremendous amount of change just from people getting out to town hall meetings, getting out on the streets, calling their congressmen. Who would have known a, you know, few months ago that the Republicans would not be able to repeal Obamacare? You know, they’re not—they haven’t been able to do it, largely because there’s been pressure from the electorate on the purple state senators and congressmen. So, people need to be out there in the streets. They need to be contacting their congressmen. They need to be demonstrating, educating and preparing for the day when we really can get single payer, which may be sooner than you think.

AMY GOODMAN: So we keep throwing around that word, “single-payer.” Explain exactly what you mean. And is the Sanders plan—it’s just been discussed this weekend. To go right to this, what would be this system in the United States?

Read the rest of the transcript or watch the interview at democracynow.org.