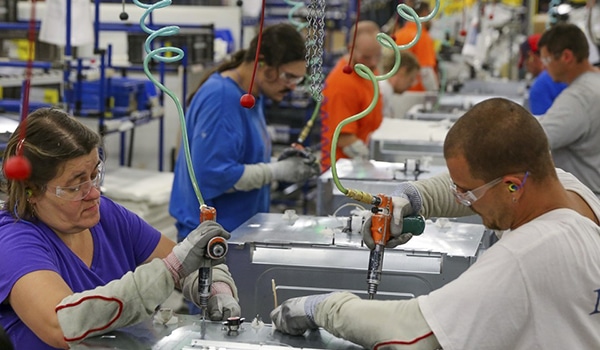 Those who advocate “freeing the market” claim that doing so will encourage competition and thereby increase majority well-being. These advocates have certainly had their way shaping economic policies. And the results? According to several leading economists, the results include the growing monopolization of product markets and the steady decline in labour’s share of national income. Neither outcome desirable.

The economists—David Autor, David Dorn, Lawrence F. Katz, Christina Patterson, and John Van Reenen—did not actually seek to examine the consequences of decades of neoliberal economic policies. Rather they sought to understand why “there has been a decline in the U.S. labour share since the 1980s particularly in the 2000s.” (See the figure below.)

What they found was evidence that sales have become increasingly concentrated in a small number of firms across many industries. And, that “those industries where concentration rises the most have the sharpest falls in the labour share.” Thus, “the [overall] fall in the labour share is mainly due to a reallocation of labour toward firms with lower (and declining) labour shares, rather than due to declining labour shares within most firms.”

The Growing Monopolization of the U.S. Economy

The authors calculated sales concentration in six large sectors—manufacturing, retail trade, wholesale trade, services, finance, and utilities and transportation—for the years 1982 to 2012. They used two different measures of sales concentration: the fraction of sales in an “average industry” accounted for by its four largest firms (CR4 with Sales) and by its twenty largest firms (CR20 with Sales). The results are illustrated in the figure below. [Editor note: also see “Monopoly and Competition in Twenty-First Century Capitalism,” Monthly Review 62, no. 11] 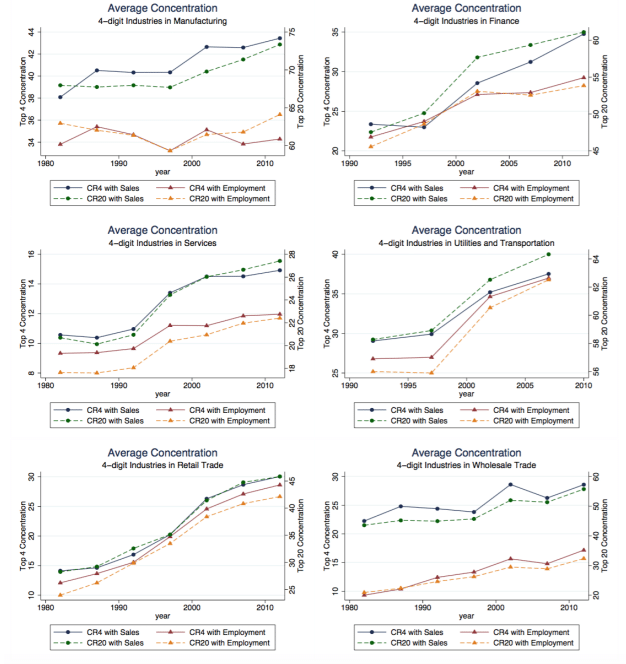 As the authors explain:

There is a remarkably consistent upward trend in concentration in each sector. In manufacturing, the sales concentration ratio among the top 4 increases from 38% to 43%; in finance, it rises from 24% to 35%; in services from 11% to 15%; in utilities from 29% to 37%; in retail trade from 15% to 30% and in wholesale trade from 22% to 28%. Over the same period, there were similar or larger increases in CR20 for sales.

The authors explain this growth in concentration by the rise of so-called “superstar” firms. These firms are characterized by rapid productivity growth and their dominance comes from the ways in which technological change has made most markets “winner take most.” In other words, innovative firms are able to quickly assert market dominance thanks to “the diffusion of new competitive platforms (e.g. easier price/quality comparisons on the Internet), the proliferation of information-intensive goods that have high fixed and low-marginal costs (e.g., software platforms and online services), or increasing competition due to the rising international integration of product markets.” And thanks to first mover advantages, this success builds upon itself, allowing superstar firms to further strengthening their market position.

Whatever the reason, clearly “market competition” has strengthened monopoly power, especially in manufacturing, finance, utilities, and retail trade, all sectors where the top four firms now account for at least 30 per cent of average industry sales.

It is the rise of these superstar firms, according to the authors, that best explains the decline in labour’s share of national income. They test and reject several other explanations. For example, some economists argue that international trade is key. But the authors point out that it is not just import-competing industries in which labour’s share is falling; it is also falling in non-traded sectors like retail trade, wholesale trade, and utilities.

Other economists point to the decline in capital costs, which they believe has encouraged firms to increase spending on capital goods, leading to falling labour shares in all industries. But the authors find no support for this. In fact, they find that “the unweighted mean labour share across firms has not increased much since 1982. Thus, the average firm shows little decline in its labour share.”

All of this points to the growth of superstar firms as the key to explaining labour’s declining share of national income. According to the authors, superstar firms have a lower labour share than do most other firms. One reason is that these firms tend to enjoy significant markup pricing power which allows them to boost their profits without adding labour. Another is that they also tend to enjoy great economies of scale; with a relatively fixed amount of overhead labour, they are able to boost production without a commensurate increase in employment.

The authors calculated concentration measures for employment (CR4 with Employment, CR20 with Employment) much as they did for sales; see above figure. As they note:

Again, we observe a rising concentration in all six sectors for 1982 to 2012, although employment concentration has grown notably more slowly than sales concentration in finance, services, and especially in manufacturing. The pattern suggests that firms may attain large market shares with a relatively small workforce, as exemplified by Facebook and Google.

And as these firms increase their market dominance, labour’s overall share tends to fall. As the authors explain: “those industries where concentration rises the most have the sharpest falls in the labour share … [Thus] the fall in the labour share is mainly due to a reallocation of labour toward firms with lower (and declining) labour shares, rather than due to declining labour shares within most firms.” In fact, the strength of this negative relationship between market concentration and labour’s share grew stronger over the period of study.

A Look Behind the Curtain

These results are important, suggesting that capitalism’s motion itself is driving labour’s declining share. However, I think that there is good reason to believe that the underlying dynamics at work are different from those highlighted above. To state it bluntly, superstar firms are driving down labour’s share because they are increasingly using strategies of profit maximization that have them replace direct labour with contract labour, franchising, and supply chains.

Over most of the post-war period, until the late 1970s, large corporations tended to directly employ the workers needed to produce the goods or services they sold. But starting in the 1980s, and especially in the 2000s, these firms began actively shedding employees and hiring smaller firms to carry out the tasks that were once done in-house. This enabled these lead corporations to greatly expand production and boost profits with a minimal increase in direct employment.

David Weil calls this strategy “fissuring the workplace” and his book, The Fissured Workplace: Why Work Became So Bad for So Many and What Can Be Done to Improve It, documents how this has become the preferred strategy of most of our major companies. Here, from Weil’s book, are three examples of fissured workplaces:

A maid works at the San Francisco Marriott on Fisherman’s Wharf. The hotel property is owned by Host Hotels and Resorts Inc., a lodging real estate company. The maid, however, is evaluated and supervised daily and her hours and payroll managed by Crestline Hotels and Resorts Inc., a national third- party hotel management company. Yet she follows daily procedures (and risks losing her job for failure to accomplish them) regarding cleaning, room set- up, overall pace, and quality standards established by Marriott, whose name the property bears.

A cable installer in Dayton, Ohio, works as an independent contractor (in essence a self-employed business provider), paid on a job-by-job basis by Cascom Inc., a cable installation company. Cascom’s primary client is the international media giant Time Warner, which owns cable systems across the United States. The cable installer is paid solely on the basis of the job completed and is entitled to no protections normally afforded employees. Yet all installation contracts are supplied solely by Cascom, which also sets the price for jobs and collects payment for them. The installer must wear a shirt with the Cascom logo and can be removed as a contractor at will for not meeting minimum quotas or quality standards, or at the will of the company.

A member of a loading dock crew working in Southern California is paid by Premier Warehousing Ventures LLC (PWV)—a company providing temporary workers to other businesses—based on the total time it takes him and members of his crew to load a truck. PWV, in turn, is compensated for the number of trucks loaded by Schneider Logistics, a national logistics and trucking company that manages distribution centers for Walmart. Walmart sets the price, time requirements, and performance standards that are followed by Schneider. Schneider, in turn, structures its contracts with PWV and other labour brokers it uses to provide workers based on those prices and standards and its own profit objectives.

At one time, large corporations like Marriott, Time Warner, and Walmart directly employed the workers that laboured on their behalf. But no more. Now, these large corporations are able to escape paying many of those who “work for them” the wages and benefits offered to their other employees. Instead, their salaries are paid by other smaller firms, whether they be independent businesses, temporary work agencies, or franchise owners, or in more extreme cases so-called independent contractors. And because these second-tier businesses operate in highly competitive markets, with substantially lower profit margins than the lead corporations they service, these workers now receive far lower salaries with few if any benefits and protections.

“This [business strategy] creates downward pressure on wages and benefits, murkiness about who bears responsibility for work conditions, and increased likelihood that basic labour standards will be violated. In many cases, fissuring leads simultaneously to a rise in profitability for the lead companies who operate at the top of industries and increasingly precarious working conditions for workers at lower levels.”

This strategy is the domestic counterpoint to the globalization strategies of the large multinationals like Dell Computers and Apple. And it has come to dominate and structure U.S. labour markets. As the Wall Street Journal explains:

Never before have American companies tried so hard to employ so few people. The outsourcing wave that moved apparel-making jobs to China and call-center operations to India is now just as likely to happen inside companies across the U.S. and in almost every industry…

The contractor model is so prevalent that Google parent Alphabet Inc., ranked by Fortune magazine as the best place to work for seven of the past 10 years, has roughly equal numbers of outsourced workers and full-time employees, according to people familiar with the matter.

About 70,000 TVCs—an abbreviation for temps, vendors and contractors—test drive Google’s self-driving cars, review legal documents, make products easier and better to use, manage marketing and data projects, and do many other jobs. They wear red badges at work, while regular Alphabet employees wear white ones…

Companies, which disclose few details about their outside workers, are rapidly increasing the numbers and types of jobs seen as ripe for contracting. At large firms, 20% to 50% of the total workforce often is outsourced, according to staffing executives. Bank of America Corp., Verizon Communications Inc., Procter & Gamble Co. and FedEx Corp. have thousands of contractors each…

Janitorial work and cafeteria services disappeared from most company payrolls long ago. A similar shift is under way for higher-paying, white-collar jobs such as research scientist, recruiter, operations manager and loan underwriter.

Two labour economists, Lawrence F. Katz and Alan B. Krueger, recently published a study of the rise of so-called alternative work arrangements, which they “defined as temporary help agency workers, on-call workers, contract workers, and independent contractors or freelancers.” They found that the percentage of U.S. workers with alternative work arrangements rose from 10.1 per cent [of all employed workers] in February 2005 to 15.8 per cent in late 2015. (See the figure below). 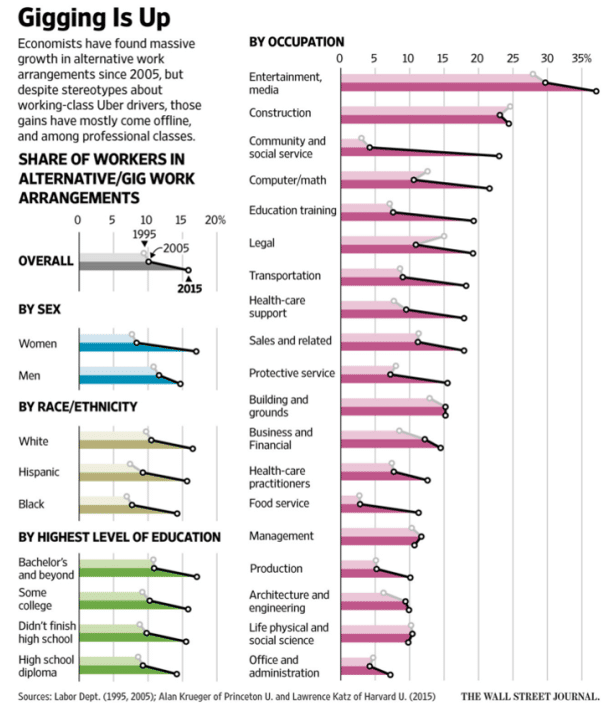 Looking behind the curtain shows that the decline in labour’s share is the result of a brutal process of work restructuring that affects a rapidly growing percentage of U.S. workers. Reversing the decline will require both a broader awareness of the negative social consequences of the private pursuit of profit and a far stronger labour movement than we have today.

Medicare for All?
Just Wait Until I Get Tenure