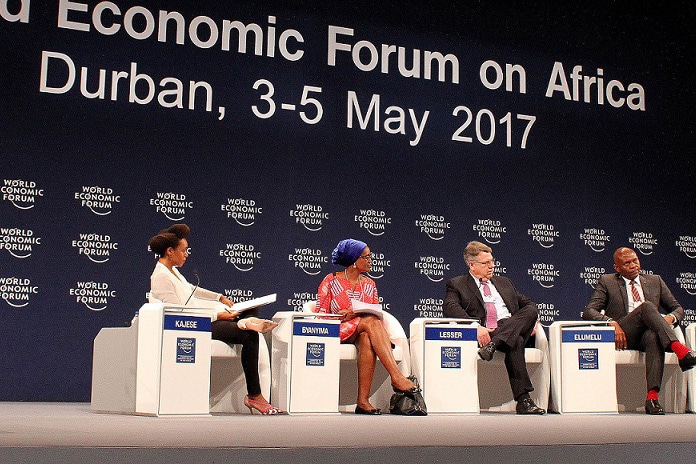 World Economi Forum on Africa, May 2017

BUSINESS DAY: You couldn’t turn on a TV, flip open a newspaper or browse social media last week without someone mentioning the World Economic Forum (WEF), which took place in Durban. But activists say that the meetings only cater to the interests of the ruling elite and communities are left out in the cold. Joining us to discuss this further is Wits professor Patrick Bond.

Patrick … you were in Durban last week. I don’t know if you’re inside the Forum or outside the Forum but it certainly does draw attention, and it draws the attention of civil society, even if they’re not included in those conversations?

PATRICK BOND: And yet they were in a sense a co-chair. One of five was Winnie Byanyima, who is the head of Oxfam International. And I mean I did go in, it was very interesting to have a debate. Does the entry of both the progressive, redistributive, democratic and anticorruption voice actually give legitimacy to a group that I think bent over too far to help Jacob Zuma and Malusi Gigaba, and the rest of the, let’s put it frankly, the tyrants: King Mswati, Robert Mugabe, Yoweri Museveni, Edgar Lungu from Zambia, who has put his opposition leader into jail recently. These are some of the very most corrupt corporations to do business in Africa and our own parastatals.

I think it was a good strategic question, was the WEF going to empower some of these forces? I want to just even use the word Zupta, to give you a sense of that choice or was it going to disempower them? And in January, when Pravin Gordhan, then finance minister with Cyril Ramaphosa led the team to Davos, Jacob Zuma stepped back, he wasn’t there and you felt in that Davos scene a bit of disapproval of what was happening. Here in Durban, I felt the WEF had bent over too far backwards to re-legitimate our ruling group. It’s not so good.

BDTV: So overall and more directly what do you think SA’s appearance and dialogue at the WEF Africa has worked to achieve?

PB: I think it achieved Malusi Gigaba’s maturing and there was widespread applause, a few tough questions and Jacob Zuma in his populist way parried them off. But if you look forward what really was at stake was whether SA could claim to lead Africa into world business and the critical process this year is the Group of 20 (G-20) hosted by Germany in which there’s a new compact with Africa. That compact has been designed by their finance minister, Wolfgang Schäuble, and Schäuble actually flew to Durban and he spent basically a day-and-a-half, he gave a big talk at the University of KwaZulu-Natal (UKZN) where he threatened Theresa May, saying, “if you think you’re going to have negotiations to handle Brexit, it’s going to be tough”.

But he also made progress in advancing this compact with Africa to find partners and the main partner, Malusi Gigaba. In a month from now they’ll be chairing a big meeting in Berlin to give more credence to the idea that Schäuble and the G-20 can help multinational corporations invest in Africa with more public subsidies — that’s the essence of the compact.

PB: I was very curious about that because from our business elite, from your own station and related media, he doesn’t. He’s obviously seen as someone who was brought in to help make nuclear deals work because Pravin Gordhan was too tough on the Zupta group. So there is a reputational problem, but of course not only with the WEF but even before that with the International Monetary Fund and the World Bank, he’s been propelled into a leadership role.

Do I think he has the capacity? Yes, he’s brilliant and he’s shown an ability to manoeuvre politically. Does he have the gravitas? Does SA have the capacity to now say we’d like the world to be a better place for business? I don’t think so. Not only because they’re junk but because, frankly, our business community hasn’t stepped up in an honest and open way. We have this big clash of Zupta and let’s say, neo-liberal, more pro-corporate forces, but … neither really has the moral authority.

I mean, at PwC, I should mention names, our corporate class in SA is the most corrupt in the world in their economic crime survey. So I think neither team really shows very well and WEF went with the ruling group.

BDTV: You talk about clever manoeuvring: part of the manoeuvring was a change in rhetoric when it came to radical economic transformation, and that shifting more so to the inclusive growth agenda. How much did that achieve and did SA’s investment case then become a lot more palatable?

PB: They had to do some of the rhetorical work, partly because Malusi Gigaba has led that phraseology from radical economic transformation to inclusivity. But look at the reality. The black economic empowerment for a few elites has gone nowhere and it’s up at a ceiling, and in fact many of those projects really have failed. And it certainly didn’t distribute because we have the worst inequality in the world. Just before the WEF, the Guardian had a new report out on inequality — we’re soaring ahead. The Gini coefficient — the measure of inequality — far worse than our neighbours Namibia and Botswana number two and three.

Now that means that inclusive growth is convenient especially at a WEF where Oxfam International is driving that. But it’s still rather a bit of semantics. We know our nationalist leaders, some of them like Zuma, with an experience in Moscow, Malusi Gigaba, from the ANC’s Youth League. They talk left sometimes so that they can walk right. It’s a bit of a game of dance, isn’t it?

BDTV: Patrick, do you think countries — middle-income countries and poorer countries in particular — do themselves a disservice by paying credence to the WEF? Because you have pointed out, there was an article last week, that since WEF threatened the policies were adopted here in the mid-90s, unemployment has risen, poverty has risen too and Nelson Mandela changed, he was persuaded by the WEF to drop the Freedom Charter to follow pro-corporate policies, are we doing ourselves a disservice?

PB: That’s correct. In 1992, Mandela went to Davos, to the Swiss annual big world version of the WEF and he was persuaded not only by the West but by China and Vietnam, and it’s a sort of famous incident where he said, “Chaps”, when he came back, “we’re not going to talk about sharing the mineral wealth. The Freedom Charter no sorry”. And I do think that’s back on the agenda because that process has led to such extreme inequality and look, the WEF competitiveness reports themselves say our working class is the angriest in the world, the least co-operative out of 140 countries. That’s every year since 2012, since Marikana.

With the worst inequality, most corrupt business class, most angry working class, completely stagnant economy where the profits are extremely high, third-highest in the world according to the IMF but it’s just not trickling down in any way. I think it is time for a change and the WEF Africa used to come more often to SA, 2002 and 2003 it was in Durban, 2013 in Cape Town, but it’s a group, especially with those corporations, which have such a terrible record of prosecution for corruption that we shouldn’t be so excited to have. They really do a lot of damage.

Patrick Bond (pbond [at] mail.ngo.za) is professor of political economy at the University of the Western Cape School of Government in Cape Town. He is co-editor (with Ana Garcia) of BRICS: An Anti-Capitalist Critique, published by Pluto (London), Haymarket (Chicago), Jacana (Joburg) and Aakar (Delhi).