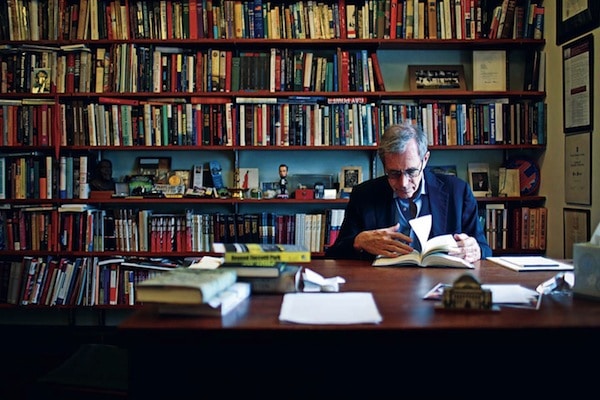 The esteemed American historian, Eric Foner, talks about his new book, the politics of history, and the meaning of “a usable past.”

On July 20, 2016, the day after Donald Trump accepted the presidential nomination of the party whose origins Eric Foner chronicled in his first book, Free Soil, Free Labor, Free Men (1970), I met with the distinguished historian, professor, and longtime Nation board member in his office at Columbia University. A longer version of this interview appears in Foner’s new book, Battles for Freedom: The Use and Abuse of American History, available here.

The Nation: How did you come to be acquainted with The Nation?

Eric Foner: I grew up in a left-wing household, so The Nation and I.F. Stone’s Weekly came to our house. It was on my radar screen, but I can’t say I had any particular connection to it until 1977, when the magazine’s publisher, James Storrow, called me out of the blue and asked for something on the 50th anniversary of the Sacco-Vanzetti case. Once Victor Navasky became editor shortly after that, he got me interested in becoming more involved in The Nation, and then at some point I was invited to join the editorial board.

The Nation: One of the early pieces in your new collection of essays is a review, written with Jon Wiener, about the Smithsonian’s exhibit on American art and the West. It’s both a response and a contribution to the culture wars. A lot of people say those battles are over, and we won.

Foner: Well, they should look at the Republican National Convention if they think the culture wars are over! By the time that piece was published, I had somehow serendipitously developed a part-time vocation in museum exhibitions. I was into the question of museums and how they can present a more up-to-date history. And then, to the surprise of historians, history became a ground for the culture wars, largely through the efforts of Lynne Cheney to torpedo the National History Standards in 1994. The argument became: “Why are historians tearing down our national ideology? Why are they trying to say bad things about our great leaders of the past? Why are they emphasizing slavery and the fate of Native Americans, all these depressing things? We have to gird ourselves for the great struggles ahead. We need history to promote patriotism among our young people.” One of the high—or low—points of my career was debating, in 1995 or so, Lynne Cheney on Pat Buchanan’s TV show, Crossfire. That was a lively occasion, with us yelling at each other the whole time.

Those wars are not over. There’s certainly a wider acceptance today of a more sophisticated, complicated view of American history than people like Lynne Cheney wanted to promote back then. The country is much more diversified, and people are aware of that, in a way, and that has helped to diversify our history. But these debates are continuing.

The Nation: What’s your position on the battles over monuments, school names, emblems, and so on?

Foner: My position is that it depends—every situation has its own context. Should we take down the statue of Thomas Jefferson here at Columbia because he was a slave owner? It’s in front of the journalism building. Jefferson was an advocate of freedom of the press, freedom of speech—it’s appropriate. Should Yale have a college named after John C. Calhoun? I don’t think so. Calhoun was the major proslavery ideologue! To my mind, that’s like having a college named after Goebbels.

We should add more monuments rather than take them away. The problem is not that you have monuments to slave owners, but that the history is completely one-sided. There are other parts of the South’s history that also deserve to be represented in the public displays of historical memory. But these are healthy debates about what our history is and how we should present it to the public. I’m very happy those debates are taking place.

The Nation: In the introduction to Tom Paine and Revolutionary America, you say that your aim in writing about the history of American radicalism was, in part, “to provide modern-day social activists with a ‘usable past.’” What does that phrase mean to you?

Foner: The “usable past” is a term that became popular in the late 1960s. Howard Zinn used it; Jesse Lemisch used it. Radical historians began talking about it. I like the term because the past should be usable. That does not mean propaganda; a distorted past is not useful. A past like the one I was taught in school when I was growing up is not a usable past. It was just about how America was created perfect and has just been getting better ever since.

The Nation: That seems usable for the Cheneys.

Foner: But it wasn’t, really, because when the 1960s came along, it was impossible to figure out how the past that we had learned about had produced this. Since all our problems had been solved, what were people complaining about? It was a past without black people, without Native Americans. A much better past was created—a truer, more accurate, more honest past—by several generations of historians. For those who want social change, knowing how social change took place in the past is a very valuable thing. That doesn’t mean you just create a Hall of Fame of great leaders of the past—that guy was great, this woman was great. That’s not what I’m talking about. History does inform the present, and it should. That’s what I mean by a “usable past”: a historical consciousness that can enable us to address the problems of society today in an intelligent manner.

The Nation: Many people describe Trump as a departure from or a rejection of American history. But is that really the case if there are so many precedents for his bigotry and fearmongering?

Foner: It’s very easy to say, “Oh, Trump’s gone off the reservation.” But actually, this is part of the American political culture, past and present. Our politics has not always been like the Lincoln-Douglas debates, some high-minded discussion of important issues. Even those debates weren’t like that! We have seen the low road many a time. Go back to the Know-Nothings, George Wallace, Richard Nixon, the Southern strategy. This is an important strand of our political culture.

That’s a more frightening thought than calling Trump a lunatic and an aberration. He is the logical extension of the way the Republican Party has been operating since Barry Goldwater. This is how the Republican Party has gotten votes for 50 years—Trump is just tearing off the mask. Now he just says right out the racism that was only barely hidden for so long. An accurate history would show that it’s always been there. We shouldn’t just talk about how weird Trump is.

The Nation: You wrote in 2010 that it’s difficult to write about Obama’s presidency without a feeling of “deep disappointment.” Does that feeling remain?

Foner: It does. Obama came into office at a very important historical moment. There was tremendous public support for him when he came in. The country was in a serious crisis—maybe not as serious as when Franklin Delano Roosevelt came in, but it was really serious. What did Obama do? He put the same guys back in that caused the problem in the first place. He passed a piddling little stimulus plan. He spent his whole first year fighting about health care and ended up with a plan that’s better than nothing, but considering what was possible with 60 votes in the Senate and a majority in the House…

My disappointment is that Obama didn’t seize the opportunity that was there. Now, maybe that’s just Obama. He’s a mainstream Democrat. We got the change that he wanted, which was minimal. But he campaigned on the promise of change with a capital C, with the backing of large numbers of people—whom he then demobilized. In November of 2008, he gave a press conference, and somebody asked where was the change? And he said something like, “I am the change.” Compare that with Eugene V. Debs, who said he wouldn’t lead his followers into the promised land even if he could, because if he could lead them in, someone else could lead them out.

So, yes, I am disappointed with Obama. It’s not the specific policies so much as his general approach to office, which I find too limited, given the circumstances in which he came in. After 2010, when the Republicans came into Congress, then his options became limited. But in the first two years he had a real opportunity, which he did not seize.

The Nation: So much of your work, in the magazine and in your books, has been about the politics of race in America. Does that story require some kind of retelling after the Obama years?

Foner: Obama reflects the fact that the civil-rights era has created a giant gap within the black community. There is a significant stratum, of which Obama is a part, that was able to take full advantage of the opening up of opportunities, and the people in this stratum have moved very far up in the universities, the corporations, and so on. On the other hand, there’s a vast and growing class of poor blacks that has suffered enormously since the financial crisis, even under Obama. Race is now even more complicated than ever by class, and the people who are being shot by police—some of them are middle-class, but a lot of them are poor black people, and they are suffering from all sorts of things in urban areas that Obama’s policies have not addressed at all. Indeed, here’s the irony: The economic policies that Obama pursued—free trade, bank bailouts, printing money to try to restart the economy—are devastating for black people. Deindustrialization—that’s where the solid black working class was, in factories that are disappearing. These have had serious impacts on black communities. That’s not why he’s pursuing them, but they’re corollaries of neoliberalism, which he supports—and it’s exacerbated the problem of race in America.

The Nation: What about Bernie Sanders? Is it inspiring that a self-identified socialist was able to get so far, or is it depressing that a generic FDR liberalism is seen these days as so radical?

Foner: Well, I think he’s a little more than a generic FDR liberal. I don’t know what will happen with the impulse that Bernie reflected. But I think it’s a major step toward what radicals try to do, what The Nation tries to do, which is to fill the vacuum created by the collapse of neoliberalism. The financial crisis created a political and intellectual vacuum. Neoliberalism was destroyed. Though it lingers on like a zombie walking the earth, it has no intellectual legitimacy anymore. But what is to take its place? “Democratic socialism” is a fine phrase, but it doesn’t have a very worked-out substance at the moment. Nevertheless, getting people talking and thinking about alternatives is a tremendous thing, and Bernie accomplished that. What can I say? I’m fairly hopeful. But I’m always fairly hopeful, even when there’s no basis for being so.