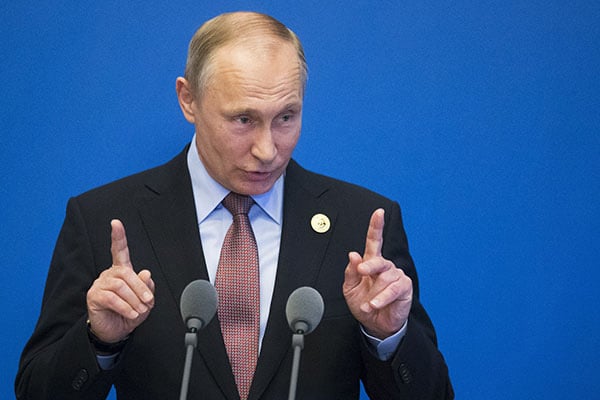 Russian President on May 17th in Sochi after a meeting with Prime Minister of Italy Paolo Gentiloni. Photo credit: Reuters.

At some point during last year’s American presidential campaign, the Democratic Party decided that it would play the Russia card and accuse Donald Trump of being at best a Kremlin stooge, at worst a Russian agent. The Democrats then turned this card almost into the centerpiece of their campaign, repeating the charges against Trump again and again. Quite why they they thought this strategy was a good one, I cannot imagine, as it merely reinforced their lack of connection with ordinary American voters, but I am guessing that after a while they had said it so often that they came to believe it.

We now know that following Hillary Clinton’s defeat, her advisors met to discuss how to react to their electoral disaster, and that they decided that the best option was to blame it on the Russians. Again, I can’t fathom why, except perhaps that it a) had now became a matter of faith, and b) it excused them from having to examine their own failings.

Since then the Democratic Party has been waging non-stop war against President Trump, focusing on his, and his close associates’, allegedly dubious connections with Russia. Abetting them have been members of the security and intelligence services who have been leaking information to the press at every appropriate opportunity in an effort to derail any attempted rapprochement between the USA and the Russian Federation. The ‘deep state’ (if you believe in such a thing) has been hard at work.

You might say that ‘all is well in love and war’, and that it’s quite fair to use whatever weapon one can in order to attack your political opponents. But in this case, I think, the attacks have not only long since became entirely divorced from reality but have also descended into gross irresponsibility.

Take, for instance, the latest allegations about Trump divulging secrets to the Russians. Horrified by this supposed abuse of power, unknown intelligence officials with the help of the Washington Post have divulged these secrets not merely to the Russians but to THE ENTIRE BLOODY WORLD. Personally, I’m not too bothered by this; my own short career in the world of intelligence persuaded me that it’s far less important than people think it is. Nonetheless, it is extraordinarily hypocritical of Trump’s critics to complain about breaches of secrecy while breaching secrecy themselves on a far grander scale. Trump’s enemies accuse him of being irresponsible, but who’s being irresponsible here?

Next – and I will go out on a limb here and make my biases very clear – I am firmly of the opinion that it is a positive thing if states have good relations with one another. And it’s especially important that powerful states do so. Which is better? A world in which the major powers are in conflict with one another, or a world in which they get on with each other? Obviously, the latter. Thus, IMPROVING US-RUSSIA RELATIONS IS A GOOD IDEA. When Trump said that during the election campaign, he was entirely right. However, his enemies are working flat out to achieve the opposite result. In an effort to undermine their president, they are doing all they can to sabotage US-Russia relations. In other words, they are jeapordizing their own country’s interests, and more broadly the security of the entire world, because they think it is a good way of gaining domestic political advantage. Again, I ask, who’s being irresponsible here?

Finally, in seeking to destroy Trump in this way, his opponents are threatening the internal order of their own country. Perhaps one other explanation for the obsession with Russia is that the ‘Never Trumpists’ aren’t seeking electoral advantage so much as some form of ‘soft coup’ or palace revolution. The hope isn’t to harm Trump’s electoral prospects in 2020, but to force him to resign or to get him impeached. They are, in essence, trying to get around the electoral process.

What makes this dangerous is that many Trump supporters are already convinced that the elites who govern the United States don’t care about their interests and have rigged the system to do them down. Now that they’ve finally got their man elected, they aren’t going to take too kindly to seeing him booted out in such a way. Were this tactic to succeed, it would alienate a large section of the population even more thoroughly than it is already, and could even, in the worst scenarios, have violent consequences (right-wing militias are already responsible for much more violence in the USA than any other type of political group). The Democrats and their allies in the security and intelligence services are playing with fire. Once again, who’s being irresponsible here?

They are shaking up the political situation in the USA using anti-Russian slogans. Either they don’t understand what harm they are doing to their own country, in which case they’re simply dimwitted, or they understand fully, and then they’re simply dangerous and unscrupulous.

Personally, I think they’re both.