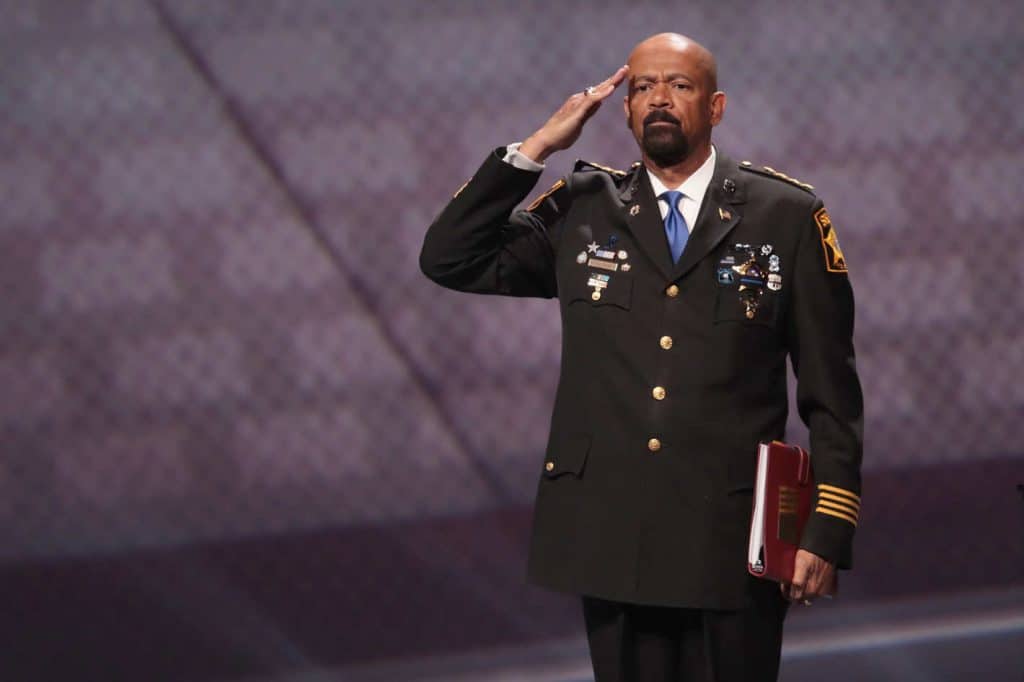 Words like fascist and authoritarian get thrown around too promiscuously. But there is no other way to describe David Clarke, who today announced that he was named assistant secretary of the Department of Homeland Security. (The Department has not confirmed Clarke’s appointment.) Clarke occupies the extremist, anti-democratic fringe of far-right officials, even by the standards of the Trump administration.

Clarke, a Milwaukee sheriff, rocketed into national prominence as a conservative provocateur by virtue of his rabid opposition to Black Lives Matter. Clarke is African-American, which has given him broader license to attack protesters in unbridled terms that thrill Republicans. He calls the group “Black Lies Matter,” or “black slime,” railing against its members as dangerous thugs. Clarke argues that not only does BLM go too far in its advocacy of criminal-justice reform, but that the cause itself is categorically illegitimate. He has lectured protesters to “stop trying to fix the police, fix the ghetto.”

Clarke’s ironfisted beliefs about criminal justice can be explained in part by his own career. He oversees a prison that is notoriously brutal. Four people have died of mistreatment and torture in his custody. One newborn baby died while its mother was shackled during childbirth; another prisoner died of dehydration, after the water in his cell was shut off for seven days. In 2013, one of his deputies ran a traffic light and T-boned the car of a civilian driver, who was badly injured. Clarke’s department charged the driver, who was actually sober, with drunk driving in order to cover up its own culpability.

It is not surprising that Clarke rejects out of hand any criticism of police misconduct. But his disdain for criminal-justice reform is not merely avocational. Clarke’s mind is organized around a worship of the virtues of physical force, combined with a seething intolerance for democratic dissent. In his book, Clarke proposes that the Department of Homeland Security — the department that he has been nominated to serve — assume police-state powers to round up internal enemies. “I suggest that our commander in chief ought to utilize Article I, Section 9 and take all of these individuals that are suspected, these ones on the internet spewing jihadi rhetoric … to scoop them up, charge them with treason and, under habeas corpus, detain them indefinitely at Gitmo,” he writes. Clarke estimates that the number of people to be rounded up in such fashion runs into “hundreds of thousands,” or “maybe a million.” Clarke is clear in his belief that the legal principles that have served as a bedrock against state abuse for centuries should be discarded. He would “hold them indefinitely under a suspension of habeas corpus” because “[b]old and aggressive action is needed.”

It is important to understand that these policies, even as extreme as they are, cannot be understood even merely as a radical extension of anti-terror policies, or misplaced fear of the terrorist threat. Clarke’s understanding of domestic terrorism runs far beyond radical jihadists. He has predicted that Black Lives Matter will “join forces with ISIS,” and on multiple occasions described the group as a terror organization. The protesters do not “care about black lives. They care about their own radical ideology of terrorism: anarchy.” Clarke insists Black Lives Matter “needs to be crushed.”

And while Black Lives Matter occupies a special place in his paranoid ideology, Clarke has increasingly applied his fervor for crushing dissent to any of Donald Trump’s critics. Attacking protesters who appeared at Trump rallies during the campaign, he told Tucker Carlson:

They only understand one thing, Tucker. And that is force. And I am talking about reasonable force by law enforcement. But I’m also talking about law-abiding citizens standing up for their constitutional right and not have their constitutional right trampled on at these rallies. I’m not encouraging them to start the fight, but I’m one of those that comes from the school, if the fight is inevitable, hit first, and hit hard.

After the initial, throat-clearing about “reasonable” force, Clarke explains that he believes that one must “hit first” if the a confrontation is “inevitable,” which — in his mind — is the natural state of political life. When protests broke out in New York and other cities after Trump’s election, Clarke raged that “temper tantrums from these radical anarchists must be quelled.”

In early October, when Trump appeared to be bound for defeat, he denounced the political system as rigged, while either literally or symbolically calling for insurrection. “It’s incredible that our institutions of gov, WH, Congress, DOJ, and big media are corrupt & all we do is bitch. Pitchforks and torches time.” The seeming contradiction between his extreme intolerance of political dissent and attribution of insurrectionary motives to his political opponents, along with his own use of revolutionary discourse, is well-explained by Clarke’s own thinking. Fascists view politics as an inevitably violent struggle in which normal bargaining and compromise are impossible.

That one of our major political parties allows a figure like Clarke to exist comfortably within it at all is deeply disturbing. That he would even be considered for a position at a security agency, where he would presumably work to implement his fascistic beliefs, is one of the most disturbing signs yet of the Trump administration’s increasingly evident disregard for democratic norms.