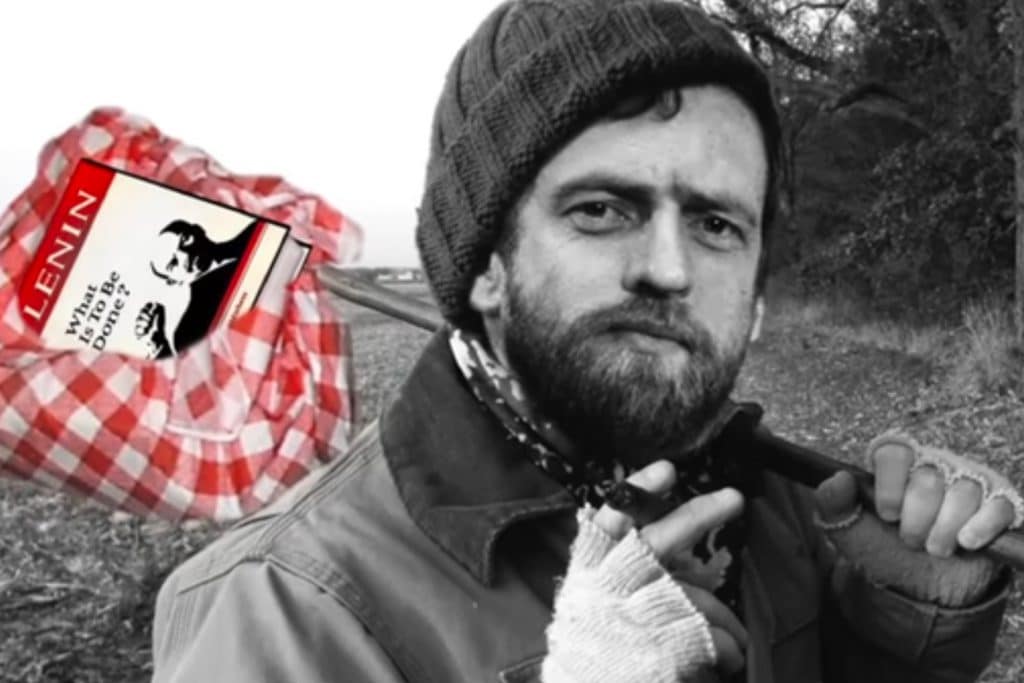 A frame from the satirical short film, ‘What Was Done’ created by Bonnie Prince Bob.

This short satirical film from Bella Caledonia (by Edinburgh filmmaker Bonnie Prince Bob) was originally banned by YouTube when it was released three weeks ago (it has since returned). As far as we are concerned it is a brilliant piece of propaganda that should go viral once again.

Here are some choice (and hilarious) lines describing the reign of the “chimera,” Margaret Thatcher:

The lunatic chimera and her henchmen wreaked an epic trail of destruction. Whilst the city of London was coated in the shiny glistening ejaculate from deregulated markets, industries that sustained the common people—such as mining, ship building, and steel manufacturing—were obliterated, consigning entire communities to poverty and atrophy.

And a small taste of the excellent historical overview that ultimately leads to Corbyn’s fictional—though entirely possible—ascendance:

A humiliating diet of bread and circuses, in conjunction with benefits sanctions,  zero hour contracts, rampant unemployment and food poverty was inflicted on the people… Yet it was here, quite incredibly—in this bleak and depressing climate of casino capitalism; where public money was siphoned into private pockets; where human values were second to capital gain; and where lies transcended the virtue of truth—that Corbyn’s miraculous revolution begun.

Try to read the subtitles to the various news clips if you are not doubled over with laughter—you’ll probably want to watch it more than once.

Two weeks ago we launched the new film by Edinburgh film-maker Bonnie Prince Bob and his team, What was Done.

This is fake news with a purpose. These are bad dudes.

The film’s now had over 200,000 views across all mediums despite being ignored by most of the Scottish media and blogosphere and kicked-off You Tube (it’s back now).

Brilliant futuristic reminiscence of the Corbyn story by @nonideefixe

The finest political art to come out of Scotland ever.

What an amazing piece and makes me so grateful to be able to call Scotland my home. #Resistance at its best. I’m posting on FB and sharing as much as possible.

It is absolutely brilliant, hopefully it will be available on June 9th for the world to see.

Absolutely stunning work and infinitely superior to anything our state-broadcaster could produce. Under the horror and scalpel-sharp humour this is a love letter to what remains of Labour’s soul. Scotland is leaving but there’s still time for England. Let’s hope they’re watching. Share it and back this major talent’s future projects.

So **Loved** this .. brilliantly done .. but FB censor ship has begun .. must have terrified some at the top ..more power to ya elbow..!

If you haven’t seen it already, go watch and share…

For the mobile-friendly link go to the Daily Motion site here: http://dai.ly/x5khzvv