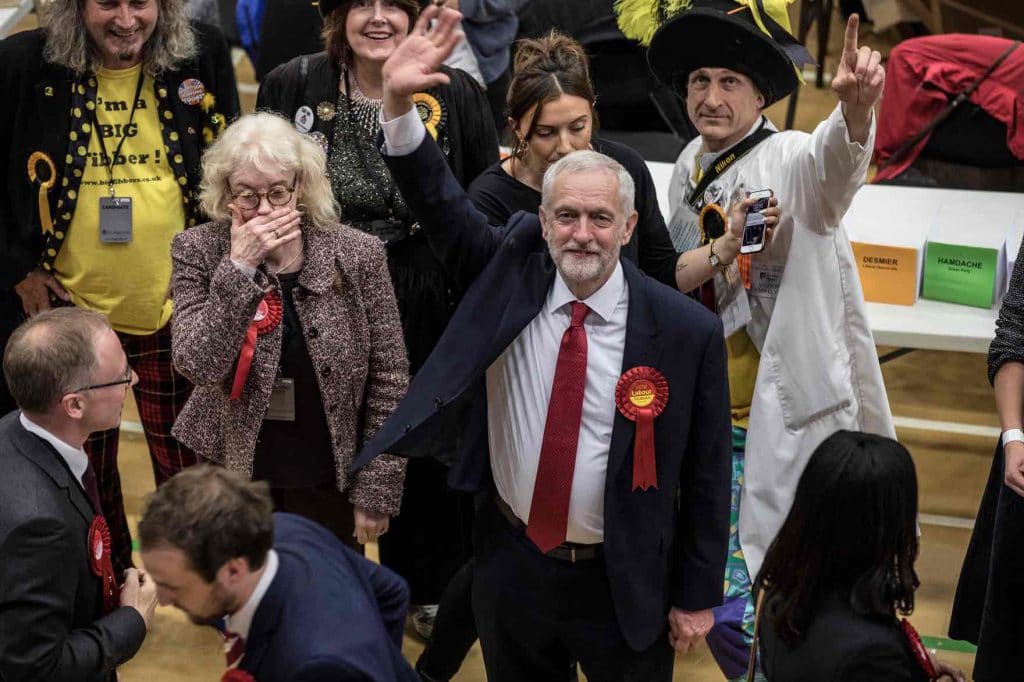 Jeremy Corbyn during the count at his Islington North constituency Photograph: Sean Smith for the Guardian.

We have been following the UK general election drama closely. In a number of recently posted articles (see here) it seemed clear that an upset was in the making, despite the tirade of anti-Corbyn commentary from mainstream media in the UK. As can be seen from the following video created by John Harris and John Domokos for the Guardian, Corbyn energized a huge segment of young, previously apathetic voters. This resulted in a surge of support for the Labour Party—though really, for Corbyn in particular. In an article from the World Socialist Website (reprinted below), Chris Marsden and Julie Hyland note that the “vote amongst those aged under 25 was 72 percent compared with just 43 percent in 2015—with record numbers signing up to vote for the first time, many of them students. This included more than 600,000 people registering on the final day before registrations closed, of which two-thirds were aged between 18 and 34.” An impressive and hopeful result in theses politically tumultuous times. —Eds.

By Chris Marsden and Julie Hyland. (Reposted from the World Socialist Website)

May will form a government but only in coalition with the Democratic Unionist Party (DUP) of Northern Ireland.

May’s argument for calling the snap election two years ahead of schedule was to secure a large majority to strengthen her position in negotiations with the European Union. These talks over the terms of Britain’s exit from the EU are set to begin in just ten days. But the Tories have lost their slim 17-seat majority. A coalition with the DUP just takes them over 322 seats required.

May’s strategy rested on winning the support of former UK Independent Party voters, and the constant media assertion that Labour leader Jeremy Corbyn was unelectable. When May first announced the poll, she was predicted to be on course for as much as a 150-seat majority and even on polling day, all the media were projecting a Tory win of between 50 to 120 seats. Instead, around half the UKIP vote went to Labour, while there was a surge of support for Corbyn amongst youth and in urban areas.

The undeclared seat is the prosperous London borough of Kensington, where there have been numerous recounts, amid reports that there are just 40 votes between Labour and the Tories. The Conservative stronghold was considered unassailable. Foreign Secretary Boris Johnson also saw his majority halved in Uxbridge.

Though the election result in part reflected concern over May’s hard Brexit strategy, the overwhelming issue was hostility to Tory austerity measures.

Labour is committed to Brexit but has said it will not sign a deal that involves leaving the Single European Market. It had also pledged to abolish tuition fees—currently at £9,000 per annum and rising.

London, which voted heavily to Remain in the Brexit referendum last year, saw the Tories lose five seats, three to Labour and two to the Liberal Democrats. Labour now holds 48 of the capital’s 73 seats.

The vote amongst those aged under 25 was 72 percent compared with just 43 percent in 2015—with record numbers signing up to vote for the first time, many of them students. This included more than 600,000 people registering on the final day before registrations closed, of which two-thirds were aged between 18 and 34.

The Tories one saving grace was in Scotland, thanks to the sharp fall in the vote for the Scottish National Party (SNP), which saw its massive majority slashed from 56 seats to 35. The main reason for this collapse was SNP leader Nicola Sturgeon’s threat to hold a second referendum on Scottish independence at the end of Brexit negotiations.

This produced the Tories best result in Scotland since 1983, winning 13 seats, including those of former SNP leader Alex Salmond and current deputy leader Angus Robertson. Labour also won seven seats, up from its disastrous one seat hold in Edinburgh South in 2015 where its majority increased by 15,000.

Tory hopes that it would even overturn Labour in Wales were dashed as Labour took its highest share of the vote for 20 years, with 28 out of 40 seats.

The alternative parliamentary arithmetic of a Progressive Alliance or a working relationship involving Labour, the SNP, Liberal Democrats, Plaid Cymru and the Green Party’s one MP, does not appear possible at this point as it is still below the 322 seat threshold. That would only change if Sinn Fein decided to take its seats, but this has been ruled out by a party that refuses to recognise Westminster rule.

A DUP source said, “We want there to be a government. We have worked well with May. The alternative is intolerable. For as long as Corbyn leads Labour, we will ensure there’s a Tory PM.”

This still leaves May in an impossible situation.

Although it supported a Leave vote in the EU referendum and is feigning a hard line against Sinn Fein, the DUP supports a soft Brexit that excludes Britain leaving the Single Market and opposes the restoration of a hard border between Northern Ireland and the Republic in the south. It also opposes large swathes of Tory social cuts, which will impact heavily on the North’s deprived population.

May herself is one of the political walking dead. Her reputation is in ruins and large sections of her party are baying for blood. Though it appears the Tories have ruled out an immediate leadership challenge, May’s days are numbered.

Hanging over everything is the beginning of Brexit negotiations. May will now head these as the lame duck leader of a government that is the very opposite of “secure and stable.” EU Commissioner Gunther Oettinger said that talks may have to be delayed, although this can only be done at the request of the UK and would need to be supported by all 27 member states and the European Parliament. Speaking to German radio, he said, “We need a government that can act. With a weak negotiating partner, there’s the danger that the negotiations will turn out badly for both sides… I expect more uncertainty now.”

Big business is furious with the election outcome. The pound immediately fell by 2 percent and banking shares by 4 percent. Carolyn Fairbairn, CBI Director-General, said, “This is a serious moment for the UK economy… Politicians must act responsibly, putting the interests of the country first and showing the world that the UK remains a safe destination for business.”

Politically the big winner in the election is Corbyn, whose promises of social reform successfully channelled anti-Tory sentiment back behind Labour. This was despite the two terror attacks in Manchester and London, and the incessant right-wing media campaign that Corbyn was a threat to national security and a friend of terrorists.

Many workers and young people will be celebrating the result, despite the fact that Labour lost. They will be called on to support Corbyn as he positions himself as a responsible opposition to the government and Labour as the focus of a possible political realignment in the event of a second general election having to be called.

This would be a grave error. Even as the election campaign was underway, and despite his social rhetoric, Corbyn had abandoned many of his supposed political principles—as evidenced in his manifesto’s support for NATO, immigration controls, Trident and the European Single Market.

He has called once again for party unity with the Blairites and will likely include them once again in his shadow cabinet.

Corbyn’s refusal to wage a struggle against the right-wing is the real measure of his political role. Moreover, any attempt to form an agreement with the Liberal Democrats, SNP and others will inevitably be accompanied by a further shift to the right.

Numerous political experiences—above all, that of the Syriza government in Greece—provide a warning. The working class can only rely on its independent political action and social strength to oppose austerity and war. Everything depends on the systematic development of the class struggle in opposition to the incessant demands that workers and youth tie their fate to the personality of Corbyn and the right-wing, pro-business and pro-war party that he heads.