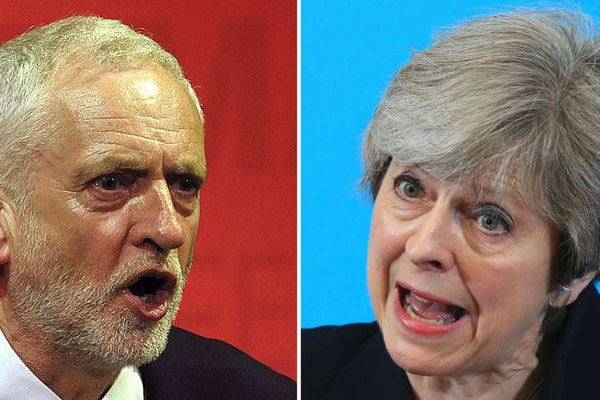 The following article is reprinted from Issue No. 93 (June 14, 2017) of Tribune des Travailleurs (Workers Tribune), the weekly newspaper of the Democratic Independent Workers Party (POID) of France.

When it came to the general election in Britain, everything was settled in advance. The Conservative Party led by Theresa May was supposed to prevail. The Labour Party, victim of its own confusion, its refusal to support the will of millions of members and voters who wanted to put an end to the straitjacket of the European Union, was supposed to be trounced.

A year ago, the forecasts were the same in relation to the referendum of 23 June 2016 concerning the European Union: British voters were not expected to resist the demand made by the leaders of the Conservative Party, the Trades Union Congress (TUC), the Labour Party — from Tony Blair’s supporters to Jeremy Corbyn — as well as from President Obama and many others, urging them to remain within the European Union. We know the result: The vote of the working class, especially in the industrial regions, led to the victory of the “Leave” position, which in turn opened a political crisis that is far from being resolved.

The same is true of the early parliamentary elections that have just taken place. The Conservative Party lost not only 13 seats, leaving it with 318 deputies in parliament, the Labour Party won 32 new seats in relation to the previous election — and Theresa May no longer has an absolute majority in parliament.

Again, what defeated the British bosses and the Conservative Party were the workers. They mobilized massively, together, with the youth, to inflict this beating on Theresa May and her government. They spoke out against the continuation of the increasingly disastrous austerity policies that for years had been the price to pay for membership in the European Union. They spoke out against giving Theresa May and her government a free hand to negotiate “Britain’s exit from the European Union” by retaining all the anti-labour obligations contained in the EU treaties.

They did so by voting for the Labour Party because its electoral platform had incorporated a number of demands that corresponded to the fundamental aspirations of the British working class — demands that were at the heart of the workers’ vote to exit the EU, despite all the obstacles, in June 2016.

The Labour Party platform contained the call for the renationalisation of the railways — a question that could not even be posed in the framework of the European Union. The platform called for rescuing the National Health Service (NHS) by injecting new sums of money into this sector. It called for increasing the hourly minimum wage from the equivalent of US$9 to $12.50, and for opposing the “zero hour” contracts — all measures that are in contradiction with the “balanced budget” dictates of the European Union.

The British workers defeated the Conservative government. They asserted that their organisations – that is, the trade unions assembled in the Trades Union Congress, and the Labour Party, which arose as the political representation of the working class — do not have to be auxiliaries of the institutions of the European Union and finance Capital. Rather, they are and must remain the necessary instruments of struggle of the working class for its demands and for its emancipation.

The British workers inflicted a defeat on the British capitalists, and they helped to strengthen the struggle of all workers throughout Europe.

They affirmed clearly their determination that the Labour Party must govern to fully carry out the social content of their vote on June 23 for the “Brexit” — by an effective break with the European Union as well as with NATO and its war-making undertakings.