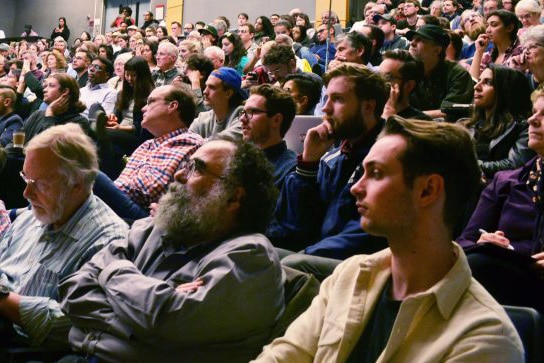 An international conference to mark  the 150th anniversary of the first publication of Marx’s Capital was held May 24 to 26 at York University.

Organized by Marx Collegium (York University), under the directorship of Marcello Musto, associate professor of sociology, the conference brought together some of the leading scholars in the fields of sociology, political science, and philosophy from more than 20 universities and 10 countries to critically discuss the history, the content, and the relevance of this path-breaking book.

As one of the largest academic events in York University’s Faculty of Liberal Arts and Professional Studies (LAPS) in many years, the three-day event attracted a large audience, with more than 1,000 students, scholars, and activists coming from as far as Nepal, Japan, Mexico and Nicaragua. The closing session, with a keynote speech by Professor Immanuel Wallerstein (Yale University), was attended by more than 300 people.

The opening session of the conference was dedicated to the ongoing project to write the global history of the dissemination and reception of Capital in the world. A number of the contributors to this collective project, whose result will be published in a forthcoming book entitled, The Routledge Handbook of Marx’s ‘Capital’: A Global History of Translation, Dissemination and Reception (London: Routledge), edited by Musto and Babak Amini (London School of Economics), presented their findings in this session. Each speaker recounted the story of the different translations of Capital in the context of the history of the penetration of Marxism in their countries and highlighted the most influential interpretations of Capital and their effects on the overall reception of Marx.

Attendees at one of the presentations in Vari Hall (image: Ravi Ishwardat)

A significant number of the papers presented at the conference were dedicated to new interpretations of Capital in light of the ecological discussions, non-European perspective, and the feminist critique. Two notable of examples were presented by Foster and Federici. In his paper entitled “Marx’s Capital and the Earth: The Ecological Critique of Political Economy”, Foster argued that Capital could be read as an ecological critique of political economy, and demonstrated the prominence of the ecological thinking in Marx’s writings, from his doctoral dissertation to his mature writings, and the negligence of such considerations among the contemporary Marxian thinkers. Federici’s paper, entitled “Marx, Gender and the Reproduction of the Working Class”, examined Marx’s conception of reproductive work in understanding and anticipating the actual unfolding of the gender relations with historic capitalism, and its consequences of Marxism in understanding the inner-dynamics of class-struggle. She criticized Marx for not seeing the unfurling process, starting from the 1870s to the First World War, of the formation of the proletariat family, characterized by the increasing exploitation of women and children and the introduction of ‘family wage’.

Another important theme of the conference revolved around critically examining the continued relevance of Capital in providing a framework to understand the transformations of our times and the nature of capitalist development. An exemplary paper outlining this theme was “The Current Crisis and the Anarchonism of Value” by Postone. He argued that understanding capitalism as an historically specific abstract form of domination is even more relevant in the context of the current economic crisis and the alarming rise of the far right.

One of the major themes of the conference was to discuss the extent to which scholars of Marx today can better reconstruct the stages of his critique of political economy in the light of the textual acquisitions of Marx-Engels-Gesamtausgabe (MEGA²). A characteristic presentation of this topic was Krätke’s paper, “Why and in What Respect in Capital Incomplete?”. He argued that Marx’s Capital remains incomplete in many crucial respects, and  the problems Marx identified but could not fully resolve laid out a research map for further inquiries.  Further to that, he surveyed the issues left unresolved by Marx and speculated why he could not settle them during his lifetime.