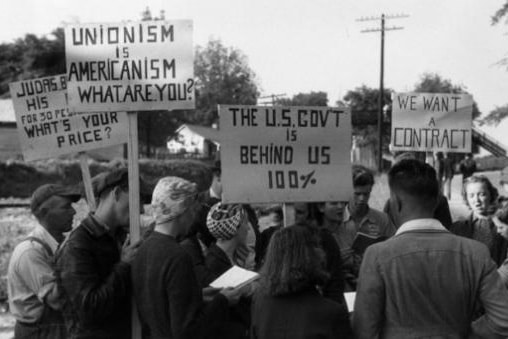 Fewer workers are in unions now than in 1983, the earliest year in the Bureau of Labor Statistics series on union membership. In 1983 there were 17.7 million, 20.1 percent of the workforce. In 2016 the number had fallen to 14.6 million, or 10.7 percent of the workforce. While union membership rates in Oregon have been above the U.S. average, they have also followed the national trend, falling to 13.5 percent in 2016.

This decline in unionization is largely the result of a sustained corporate directed and, in many ways, government-aided attack on unions. Its success is one important reason why corporate profits have soared and most people have experienced deteriorating working and living conditions over the past decades.

Improving our quality of life will require rebuilding union strength. And, although rarely mentioned by the media, things are starting to happen in Portland. Over the last few years new unions were formed and/or new contracts signed by workers at our airport, zoo, K-12 public schools, colleges and universities, parks and recreation centers, hotels, restaurants, hospitals and office buildings.

The attack on unions

It is a violation of U.S. labor law for an employer to “interfere with, restrain or coerce” employees who seek to exercise their right to unionize. However, the law is so weak that many employers willingly disregard it and accept the consequences in order to stymie union organizing efforts.

Many companies also try to undermine union organizing campaigns by illegally threatening to shut down or move operations if workers vote to unionize. One mid-1990s study found that more than 50 percent of all private employers made such a threat. The acceleration of globalization in the following decades, thanks to government support, has made growing numbers of workers fearful of pursuing unionization, even without an explicit threat by management.

Although not the most important factor, unions also have some responsibility for their decline. Union leaders have often been reluctant to aggressively organize new sectors; encourage new leadership from people of color, women, and other marginalized groups; promote rank and file democracy in decision-making and organizing; and vigorously defend the rights of their members to live in healthy communities as well as work in safe workplaces.

Taking all this into account, it is no wonder that the share of workers in unions has declined.

The decline in union strength matters. Here are a few examples of what unions still deliver:

According to the Economic Policy Institute, “the union wage premium – the percentage-higher wage earned by those covered by a collective bargaining contract, adjusted for workers’ education, age and other characteristics – is 13.6 percent overall.”

Looking just at Oregon, the Oregon Center for Public Policy found that “union representation boosts the wages of Oregon’s lowest paid workers by about 21 percent, while middle-wage workers enjoy an increase of about 17 percent. Even the highest paid workers benefit from unionizing, with a 6 percent increase to their wages.”

Studies also show that strong unions force non-union employers to lift up the wages and improve the working conditions of their own employees for fear of losing them or encouraging unionization.

More generally, unions provide workers with voice and the means to use their collective strength to gain job security and say over key aspects of their conditions of employment, including scheduling and safety. These gains are significant in our “employment at will” economy where, without a union, employers can fire a worker whenever they want and for whatever reason, subject to the weak protections afforded by our labor laws.

The corporate pursuit of profit continues to transform our economy in ways that increase worker hardship and insecurity. And unions will have to transform themselves accordingly.

As the Wall Street Journal describes, “Never before have American companies tried so hard to employ so few people. The outsourcing wave that moved apparel-making jobs to China and call-center operations to India is now just as likely to happen inside companies across the U.S. and in almost every industry.”

At most large firms, 20 percent to 50 percent of the total workforce is now outsourced. This includes big and profitable U.S. companies like Google, Bank of America, Verizon, Procter & Gamble and FedEx.

In sum, companies aren’t going to willingly offer us jobs that pay a living wage, provide opportunities for skill development, and afford the security necessary to plan for the future. We are going to have to fight for them. And the strength of unions will be critical in that effort. So, the next time you hear about a unionization campaign or union organized workplace action— support it. You will be helping yourself.