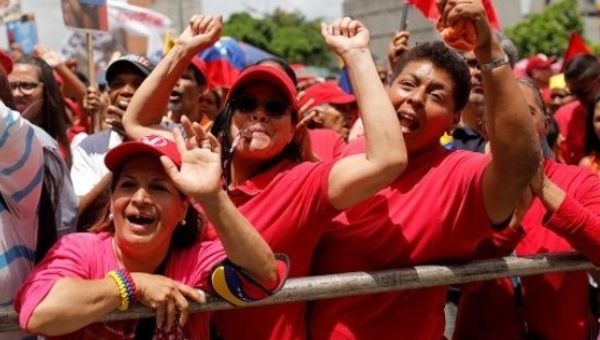 Supporters of Venezuela’s President Nicolas Maduro participate in a rally in support of the National Constituent Assembly in Caracas. Photo: Reuters.

The implication was that Venezuelans want a coup against the democratically elected government of Nicolas Maduro. Ken Roth certainly seems ready to applaud a coup. The corporate media throughout the Americas and Europe (as Human Rights Watch itself happily pointed out) is unanimous in depicting Maduro’s government as a dictatorship. The unanimity reveals something deeply wrong with corporate media. It should be a source of embarrassment, but that’s unthinkable to people like Ken Roth, whose outfit has a revolving door with high level U.S. officials. However, Torino Capital, in an update for investors this week, discussed a poll done by an opposition-aligned pollster, Datanalisis, which reveals that Venezuelan public opinion is not what you’d expect if you rely on the disinformation loop in which corporate media and Washington-friendly NGOs like HRW participate.

Datanalisis is run by Luis Vicente Leon.  He writes op-eds regularly for El Universal, one of Venezuela’s largest newspapers, as do many others who are even more vehemently anti-government. Leon has also appeared frequently on Venezuela’s biggest private TV networks. In a previous piece, I gave examples of the strident anti-government remarks Leon has made in the Venezuelan media.  His company, given its opposition to the government, has long been a favourite of the international press, and often treated as if it were the only pollster in the country.

With the anti-government orientation of Datanalisis in mind, consider the following results from the survey conducted between May 20 and June 4.

Taking these results at face value, it is clear that Venezuelans do not want a coup, and that there would be fierce resistance to efforts to eradicate chavismo by force as US-backed opposition leaders have long desired. A large segment of the public does not support the protests and also rejects intransigent positions of the main opposition leaders (no talks with government, no participation in the elections for the Constituent Assembly).

Incidentally, the unelected president of Brazil, Michael Temer, who owes his position to corrupt judges and politicians, has an approval rating ranging from 4% to possibly as low as 2% according to recent polls. But, since he is also a U.S. ally, HRW has urged his government to adopt a belligerent and interventionist stance towards Venezuela, which he has.

Maduro’s allies won 41% vote in parliamentary elections in December of 2015 which was the worst chavismo has ever done in a major election since 1998. Two months before that election, Datanalisis said that Maduro’s approval rating was 21.2%. Datanalisis then said it rose to 32% at the time of the election. Elections provide a way to check what pollsters claim. Unfortunately that can’t be done with the survey results that Datanalisis just released, but it is safe to conclude that they probably understate results that favour chavismo and overstate results that favor the opposition.

Torino Capital summed up the Datanalisis poll results saying that “Maduro still counts with a loyal base of supporters, of around one-fifth of the population.  The opposition seems to count with the support of around half of the population.  The remainder are Venezuelans who do not like the opposition and identify with Chávez but who dislike Maduro and the way that he has governed the country”.

In April, a survey by Hinterlaces, a company with the opposite bias of Datanalisis, said that 35% support political parties allied with chavismo, 29% those with the opposition, and 36% with neither group.

Despite a massive economic crisis which has fueled displeasure with Maduro, the widespread distrust and rejection of the opposition is easy to understand.

Prior to this year’s violent protests, there were four other attempts to overthrow the government – one of them (a US backed military coup in April of 2002) was briefly successful.  The coup was followed by an oil strike – an act of deliberate economic sabotage that contracted GDP per capita by 20%. There were violent protests in 2013 after Nicolas Maduro was first elected that led the deaths of several of his supporters. There were violent protests again in 2014 – a few months after the opposition suffered a defeat in local elections (before a huge collapse in oil prices took place which devastated Venezuela’s economy). Those protests led to 43 deaths – roughly half strongly implicating violent protesters. This year’s protests have led to 84 deaths so far.  At least 22 of the victims have either died directly at the hands of protesters or in accidents caused by barricades protesters placed on roads. At least 14 have been caused by government security forces or pro government supporters. A large number, 33, are disputed and not easily sorted out because, as the corporate media has been totally unwilling to emphasize, both sides have used lethal force.

Leopoldo Lopez, who is portrayed as Venezuela’s most prominent “political prisoner” openly supported all five major efforts to overthrow the government. He even participated in the kidnapping a government minsters during the short-lived Carmona dictatorship of 2002. U.S. enemies are expected to tolerate violent foreign-backed subversion or be labelled dictatorships by the “free press”.

The vilification campaign against Maduro is a continuation of the campaign that was directed at Chavez for almost all his years in office. Under Chavez, Venezuela’s Human Development Index went from seventh among Latin American countries to fourth. Chavez presided over redistribution of wealth in favor of Venezuela’s long neglected poor and also a massive increase in their political participation. Like Maduro, he confronted wealthy opponents (the same core group of opposition leaders) who used lethal violence and economic sabotage to attack his government and who were backed by the United States, corporate media throughout the world, and prominent NGOs.

Bolstered by its cheerleaders abroad, opposition leaders appear confident that they can simply seize power and eradicate chavismo by force – that its backers abroad will help them sweep the consequences of trampling over about half the population under the rug. We need only look at countries that have been destroyed in recent years by the U.S. government and its allies – Iraq, Libya, Syria and Haiti – to understand what a serious threat that is.