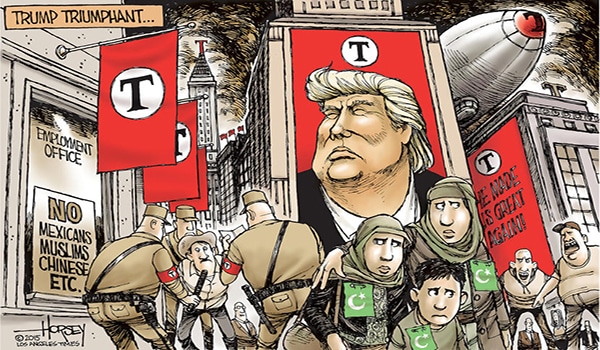 John Bellamy Foster was recently interviewed by Michael Steven Smith and Heidi Boghosian, hosts of the podcast Law and Disorder. The interview focuses on Foster’s newest article on Trump: “This is Not Populism” published in June 2017 (Monthly Review 69, no. 02).

Is Trump a neofascist? Thoughtful analysts on the left like Cornell West, Noam Chomsky, and Judith Butler think he is. But mainstream liberal commentators refuse to associate the Trump phenomena with fascism. They call him a right wing populist. What is neofascism? Right wing Populism? Does it really matter what Trump is called? The great German playwright and political thinker who lived in Germany during Hitler’s reign, Berthold Brecht, asked in 1935: “How can anyone tell the truth about fascism, unless he’s willing to speak out against capitalism, which brings it fourth?” We speak today with John Bellamy Foster, the editor of the venerable magazine “Monthly Review”. He wrote the lead article in the current June 2017 issue titled “This Is Not Populism.”

Guest – John Bellamy Foster is editor of Monthly Review and professor of sociology at the University of Oregon. He has written widely on political economy and has established a reputation as a major environmental sociologist. He is the author of Marx’s Ecology: Materialism and Nature (2000), The Great Financial Crisis: Causes and Consequences (with Fred Magdoff, 2009), The Ecological Rift: Capitalism’s War on the Earth (with Brett Clark and Richard York, 2010), and The Theory of Monopoly Capitalism: An Elaboration of Marxian Political Economy (New Edition, 2014), among many others.