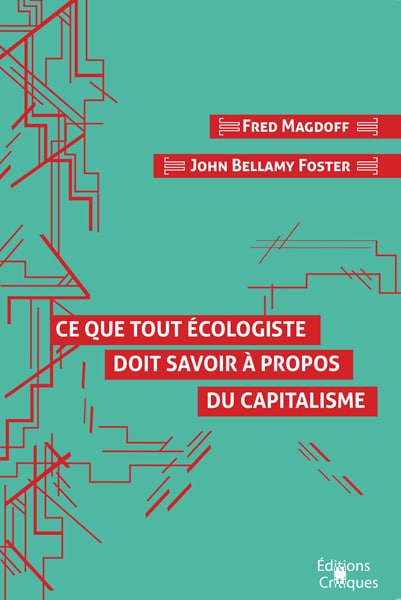 The following preface to the 2017 French-language edition of What Every Environmentalist Needs to Know About Capitalism by Fred Magdoff and John Bellamy Foster will be published by Éditions Critiques and will appear in September 2017. —Eds

The United States is sometimes viewed as the most extreme capitalist society on earth. The decision of the newly elected Trump administration to withdraw from the Paris Climate Agreement would seem to affirm such a judgment. It highlights the fact that while capitalism cannot solve the environmental problem, a more extreme capitalist society can, if it is not stopped, eliminate all possibility for a future sustainable society, by accelerating the runaway train to catastrophe represented by today’s business as usual.

Turning this around requires a more revolutionary ecological vision on the part of U.S. society and humanity as a whole. Not only do we need to take those small steps to mitigate climate change that are possible within the system, we also have to leap forward into a new, uncertain, but hopefully more sustainable future. We need to abandon the burning house represented by the capitalist system. There is no absolute assurance that we will succeed in establishing a sustainable world order. However, without breaking with the logic of capital and moving on to create a more just and ecological society, based on a new social-metabolic relation to the earth, there is simply no hope for humanity.

What Every Environmentalist Needs to Know About Capitalism originated from our discussions with people concerned with the environmental degradation taking place all around us: pollution of air, water, soil, and life itself; the declining populations of many species and accelerated extinctions; depletion of natural resources; global warming and climate change; and ocean acidification.

The assault on the environment that continues to this day is truly staggering, with severe harmful consequences for people alive today and our descendants. In our many conversations, earnest people concerned with these issues were expounding a number of explanations for why they believed this crisis was occurring. These ranged from the hypothesized innate human tendency to destroy the environment (humans believe they have the right to dominate, control, and exploit the natural world at will), to a supposedly fixed characteristic of greed that motivates people, to having an obsession with economic growth that somehow stimulates growth, to just too many people in the world.

It became clear to us that while most people deeply concerned with the environment were groping for explanations, they were mostly unaware of how the capitalist economic system operates in the real world and how it might be the root cause of these problems.  The system’s imperative and moving force to accumulation of profits without end—stimulating growth without end, unrelated to the needs of humanity—has no way to take into account social and environmental side-effects. This results in the environmental and social “externalities” that economists refer to, as if they were truly independent of the way capitalism functions and outside its logic. In reality they are inevitable outcomes of the way the system operates at its most basic level.

It is our hope that the issues and ideas we discuss will help people understand the systemic nature of the ecological crisis and, therefore, the necessity for a new and very different society: one that operates by working as a partner with the cycles, flows, and other organisms of ecosystems instead of either ignoring or trying to overwhelm them in pursuit of greater profits. The goal must be to promote sustainable human development which takes care of the earth even as it expands individual and social capacities and freedom in general. We need to give a new, more inclusive meaning to the great words of the Internationale: “The earth shall rise on new foundations. We have been naught we shall be all.”