The concert hall in Hamburg’s wonderful new Elbphilharmonie edifice resounded with Schiller’s thrilling Ode to Joy and world brotherhood in Beethoven’s 9th Symphony. Nineteen heads of state were there for a G-20 conference; only Erdogan from Turkey was missing; he may not appreciate Beethoven or was too busy worrying about the huge peaceful march to Istanbul, a first major response to his repression. All other leaders and their spouses heard the music; even Donald Trump was seen for a TV moment with half-closed eyes, in euphoric enjoyment of Beethoven, we assume. Or why else?

For the outside world it was not Schiller’s sparks of joyful brotherhood which marked that evening—and two more evenings—but those from the torches of black-masked figures setting fire to cars and dumpsters, throwing fireworks, breaking shop windows and shop interiors.

What lay behind the destruction and all the water cannon and pepper gas used in response? Did it overshadow the meetings? Was anything accomplished in polished conference rooms and luxurious hotel suites carefully protected from the wild, fiery street scenes? Was it worth hundreds of injured police officers and arrests and millions in damage?

The event was rife with contradictions and haziness, not only from smoke and tear gas. The groups opposing the conference ranged in tactics from mild disapproval to violent disruption, some condemned climate warming, others condemned capitalism. One group denounced Erdogan, others opposed Merkel, muslimophobe racists, or Putin. For the first two hours, it seems, the police did nothing to control the masked men with torches and hammers but then moved in hard with a water barrage against a large group which was defiantly blocking the street but was non-violent, with no connection to the masked “black bloc”. One police spokesperson explained their long wait to fears of Molotov cocktails, cement blocks or stones thrown from rooftops in Hamburg’s famous leftwing-anarchist Schanzenviertel neighborhood, not wanting to risk lives of police and civilians. But well before any Bush, Obama or other controversial dignitary visits in Germany every sewer is examined and sealed off, divers check river bottoms, windows along the route are ordered shut; even a hostile mouse could hardly get through and do any damage. Here 20 top world leaders were expected, for months, but no-one seemed to think of the rooftops until the flames spread.

Some things are still hard to explain. By skipping musically from Beethoven to Gilbert and Sullivan’s very British operetta HMS Pinafore, we find a song famously casting doubt on appearances:

“Things are seldom what they seem, Skim milk masquerades as cream…” Etc.

At heated events in the past, some masked men were rather “skim milk” than cream. When the G-8 met at Heiligendamm in 2007, a leading stone-thrower lost his mask and was recognized as a police employee. The far left-anarchist center in Hamburg (a building known as “Red Flora”), a main organizing center of the current protests, has been infiltrated more than once by very “leftist”, inquisitive, even libidinously active police spies. Some truths may never come out; who is masquerading here and why. New, angry demands from the CDU and the SPD that “leftist-terrorists” from all of Europe should be listed in a register make me wonder; isn’t someone who reads Karl Marx or calls for socialism a “leftist-terrorist” for some dignitaries making these demands? And isn’t this “down with leftists” campaign one more reason to suspect black-masked provocateurs?

The city-state Hamburg is now ruled by a coalition of Social Democrats and Greens. The Social Democratic mayor has sometimes been considered as a popular new national head of his slumping party. Only until this weekend, that is! Now he is being pressed by indignant Christian Democrats (Angela Merkel’s CDU) to step down. Germany’s second city is at stake and so are crucial German elections, due in eleven weeks. The calls for even more authoritarian measures than recently approved have grown to a louder crescendo than any joyous chorus in the 9th Symphony.

The CDU is well ahead in the national polls, at about 38%. Its desired partner, the right-wing big-biz Free Democrats, are moving upward with 8% and could supply the desired majority. But polls often change, and Merkel and her band would gladly squelch any remaining chance that potential rivals might somehow present a challenge. After a brief surge with their new leader Martin Schulz the Social Democrats slumped back downward and now trail by 13 points. But who knows? Some still hope they can overcome repugnance toward the LINKE and join them and the Greens, who will team up with almost anyone to win a few cabinet seats, and squeeze out a ruling coalition trio. For the CDU, angry new demands for more “law and order” from countless frightened citizens might have been just the needed guarantee for rescuing Germany from an imagined “leftist threat”.

Did such tactics play a secret role last weekend? We can only hum again: “Things are seldom what they seem, Skim milk masquerades as cream…”

It would seem, however, that Angela Merkel did hope to improve her world standing, already so strong, with herself as courteous hostess of a great conference, heading toward the top of the world pile, despite differences with the transatlantic ally, indeed, replacing that unruly clown in some areas without quite breaking with big brother’s trade and ebbing yet still powerful political and military muscle. Did she navigate the tight rope? This scene, too, is murky, with deceptive lights and shadows.

The decision on saving the Paris Agreement, without Trump, is rated as a limited success, since no one expected him to back down. Was nearly everyone else’s yes-vote a triumph for our sea and air? Paris had been a step forward, if a limited one. But the Christian Democrats (and Greens) have ties to Daimler and Porsche; official Social Democrats enjoy financial ties to Volkswagen (sharing with Qatar) and Bavarian Christian politicians are close to BMW. None fought passionately for better air conditions, their electronically deceptive exhaust pipes aimed in false directions. German “Marshall Plan assistance” to sub-Saharan Africa is to be mostly private, hence profit-oriented, fond of wide, monstrous monoculture with few workers, ruined landscapes and countless shaky boats risking Mediterranean waves and winds. That does not bode well for big advances, nor did the lack of any African leader except Jacob Zuma, more an expert on private swimming pools than cleaner oceans.

The trade agreement has been billed as the one really big success. But trade agreements now on the drawing boards seem likely to be rehashes of the dumped TTIP Trade Treaty between Europe and the USA, beneficial if you’re a big import-export trader but not otherwise. And Washington may come around, anyway. Trump’s pledges to ditch NAFTA no longer seem so very definite, any more than making Mexico build that wall. Promises can sour, too, like skim milk.

Two happenings during the conference, though pushed to the media sidelines by the torches or the wardrobes of the Trump ladies and Ms. Merkel, were potentially far more crucial. Merkel, Putin and Macron met to try defusing the Ukraine conflict. We do not know what was accomplished, if anything, but it was good that they talked. Almost immediately NATO boss Jens Stoltenberg raced off to Kiev to undo possible de-escalation by opening an exhibition called “Ukraine-NATO. A Formula for Security”. His obvious aim (for years now): to fully close the nearly total, heavily-armed NATO ring around Russia. We shall see how many warning statements, euros, battalions and weapons Merkel and Macron will commit to that ring—or will they surprise everyone by working towards peace?

Far more important was Friday’s meeting between Putin and Trump, when they agreed on a cease-fire in southwest Syria. Secretary of State Rex Tillerson said: “This is our first indication of the US and Russia being able to work together in Syria… The two leaders had a lengthy discussion of other areas in Syria where we can work together”. Both the US and Russia “promised to ensure that all groups there comply with the ceasefire” and “provide humanitarian access”. Thus far the cease fire has held.

Of course, no-one knows what Donald Trump will say or do tomorrow, perhaps not even Donald Trump. He has ordered more and bigger maneuvers in South Korea, against South Korean wishes, for they would be worst hit if sparks lead to explosions. He backed off from cyberwar agreements. But volatile and untrustworthy as he is, and a growing danger in domestic policy, the fact that the head of the most powerful military force in the world took one hesitant step toward reducing tension with a country pictured as “the enemy” was a second Hamburg event offering any hope.

Why do so many US politicians and journalists attack such hopes? Do they want more bloodshed in Syria? Or some bloodthirsty idiot stationed in Estonia or Poland to light that fuse; we have many bloodthirsty idiots around, some with hand weapons in schools and dancehalls, some commanding drones, aircraft carriers and atomic warheads. Should we let them escalate confrontation?

One such liberal was full of hatred toward Putin for “helping to orchestrate an attack on the sovereignty of the United States during the last U.S. election”. His evidence? “According to all indications.” No more. Yet when Trump shook hands with Putin and patted him on the back he found that “a disturbing if not sickening display…. No one is arguing that seeking peace and lowering tensions with Russia isn’t necessary. But demonstrating strength and resolve, in ways small and large, is an imperative in trying to reach those ends. That and making it abundantly clear that mucking around in American elections will not be tolerated.” Such language brings back terrible memories! 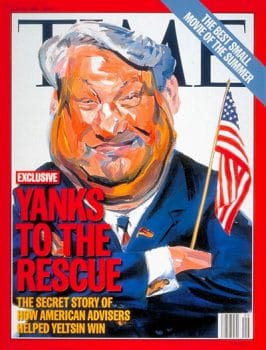 Perhaps, after quoting Dan Rather, I should recall Washington’s total involvement (with Pres. William Clinton) in having Russia “increasingly passing into de facto western receivership,” with American advisors and funds openly backing Yeltsin, leading to the near total collapse of the county. A huge US-backed IMF loan at the time was, according to the New York Times “expected to be helpful to President Boris N. Yeltsin in the presidential election”. As TIME noted, “Yanks to the rescue: The secret story of how American advisers helped Yeltsin win.”

I also think of the Ukraine in February 2014 when Deputy Secretary of State Victoria Nuland, after “contributing” $5 billion, said over the phone “I think Yats is the guy.” And indeed, Arseniy Yatseniuk was then “the guy”. There have been so many such stories from Chile to Myanmar; I wonder whether those so horrified today were sickened then at US attacks on others’ sovereignty. There has been lots of masquerading, I think, by disguised provocateurs or indignant sovereignty defenders. Their threats against even hesitant moves toward dialogue, disarmament, de-escalation in the world’s charged atmosphere are what truly sicken me—and frighten me!