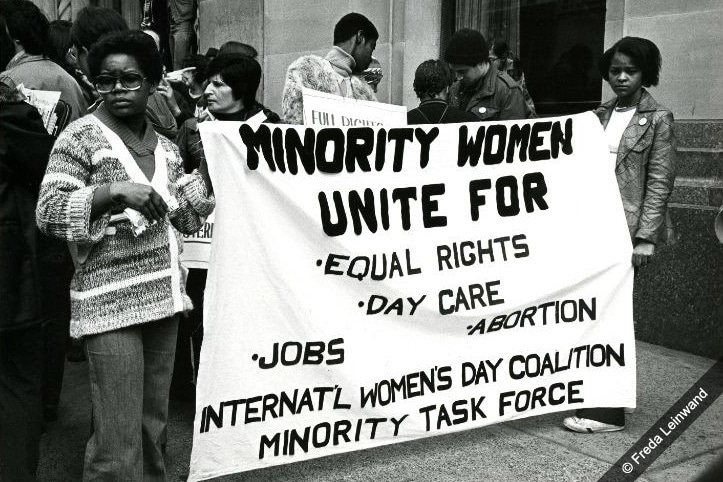 For many socialist feminists, critiquing liberal feminism is easy. Many of us came to socialism from liberalism and have a clear understanding of its limits and flaws.

However, the history and substance of radical feminism is less well known. While the “radical” in radical feminism seems to suggest a politics that socialists would embrace, a closer look reveals an ideology that’s incompatible with socialist feminism. Plagued by a narrow understanding of gendered oppression and a misguided strategy for change, radical feminism ultimately fails to offer women a clear path to liberation.

Radical feminism arose out of second-wave feminism in the 1970s, alongside, but mutually exclusive from, socialist and Marxist feminism. Nonetheless, they share some commonalities. Like socialist feminists, radical feminists take issue with the individualism of liberalism and argue that personal choices and individual achievement are not enough to transform society. And they locate women’s oppression in a broader, societal context.

From the beginning, radical feminists have been especially concerned with sexual and domestic violence, seeing it as fundamental to women’s oppression. Andrea Dworkin, one of the most prominent radical feminists of the 1980s, distinguished herself with her crusade against sexual violence. In one of her most famous speeches, “I Want a 24 Hour Truce During Which There is No Rape,” Dworkin implored men in the audience to try to understand the profound fear of sexual violence that women live with every day.

This commitment to combatting sexual violence — a scourge that hinders all aspects of women’s lives — is admirable. So too is radical feminists’ emphasis on large-scale reform rather than small-scale tweaks.

But the way that radical feminists have gone about enacting change is both troubling and symptomatic of deeper flaws in their ideology.

Some aspects of pornography are undoubtedly despicable, racist, and violent. But outlawing pornography would do little to address the immediate, material concerns of women involved in the industry. And it makes no sense to work with conservatives to fight women’s oppression. These are the same people who want to restrict women’s access to reproductive health and roll back the already-meager welfare state.

Radical feminists’ anti-porn work throws into sharp relief the dangers of misidentifying the roots of women’s oppression. Relying on the state for censorship, emboldening the carceral apparatus, making alliances with opponents of progressive change — this is where radical feminism’s analysis leads us.

Class and the Origin of Women’s Oppression

At the core of radical feminism’s theoretical blunders is its conception of class.

For radical feminists, the two main classes in society are not the working class (who sell their labor power) and capitalists (who exploit them), but men (the oppressors) and women (the oppressed). They call this patriarchy theory.

Radical feminists don’t always acknowledge capitalism, but even when they do, they regard it as a completely separate sphere, siloed off from female oppression. Their ultimate goal is to abolish gender, which they see as inherently hierarchal and oppressive toward women.

While Marxists share this antipathy toward patriarchy, we have a different conception of both class and the roots of women’s oppression. We define class not in gender but in economic terms: a person’s class is determined by their relationship to the means of production and the state. Hillary Clinton and Sheryl Sandberg, for example, reside in much a different class than the female graduate student fighting for unionization or the mother of four working at a fast-food restaurant for minimum wage.

Socialists oppose any and all sexist comments hurled at Clinton, Sandberg, and other elite women. But the fact remains that their interests as capitalists and well-heeled politicians are fundamentally at odds with the interests of the vast majority of society.

Take a recent example: when female hotel workers attempted to unionize a Double Tree Hilton in Cambridge, Massachusetts a couple years ago, they explicitly asked for Sandberg’s support, stating that they were taking her advice to “lean in.” Sandberg refused to back them. And it’s no wonder. Universal “sisterhood” ran up against the concrete interests of capital. Sandberg’s true allegiances came through, loud and clear.

As Marxists, we know the enemy is not men, but the capitalist class — which itself is multi-gendered and multiracial — and that our strategy must reflect this. Women’s oppression is not innate in humans but instead arose at a particular historical and political moment, alongside the development of class society and the nuclear family.

Women’s oppression persists not simply because men hate us, but because of the role we’ve played historically in the nuclear family. While men headed off to work each morning to engage in capitalist production — making cars at the factory, writing legal briefs at the office — women typically engaged in what is known as social reproduction: the biological reproduction of new workers (i.e. having children) and the day-to-day reproduction of workers — doing laundry, feeding the family, getting children ready for school, and so on.

Even in recent decades, as women have entered the paid workforce en masse, they’ve still tended to be saddled with the “second shift,” carrying out social reproduction at home after they return from work.

These tasks are all vital to capitalism. Workers must be fed, clothed, and prepared every day for capitalism to function. But it is in capitalism’s interest for this work to be done for free and in the private sphere.

As a result, socialist feminists argue that the only way we can liberate women is to end class society, once and for all.

Along the way, there are reforms we can and should fight for, like raising the minimum wage, introducing paid maternity leave, and implementing universal child care. Socialist feminists like Sylvia Federici have also advocated “wages for housework,” in order to provide women financial independence and recognize their work in the domestic sphere as labor. Others, like Angela Davis, have proposed socializing these domestic tasks to remove the uneven and gendered burden from women.

But none of these reforms — much less the overthrow of capitalism — will be won without massive and united social movements. And that’s where the working class comes in. Because of its position in society, the working class as a whole — in all its multi-gendered, multiracial, multigenerational glory — is the societal agent that can fight to radically reform, and ultimately go beyond, capitalism.

Does this end goal include the abolition of gender? Probably! To quote Engels:

That will be answered when a new generation has grown up: a generation of men who never in their lives have known what it is to buy a woman’s surrender with money or any other social instrument of power; a generation of women who have never known what it is to give themselves to a man from any other considerations than real love or to refuse to give themselves to their lover from fear of the economic consequences. When these people are in the world, they will care precious little what anybody today thinks they ought to do; they will make their own practice and their corresponding public opinion about the practice of each individual — and that will be the end of it.

Radical Feminism and Its Exclusions

In recent years, many people’s understanding of radical feminism has been colored by their opinions of TERFs, or trans-exclusionary radical feminists. Not all radical feminists are TERFs. MacKinnon has been an outspoken supporter of trans rights for decades, and has criticized TERFs for their bigotry. “Anybody who identifies as a woman, wants to be a woman, is going around being a woman, as far as I’m concerned, is a woman,” she said in a 2015 interview.

But while not synonymous, radical feminism contains many TERFs in its ranks, and its core ideas lend themselves to an exclusion of trans people, especially trans women.

For many radical feminists, it doesn’t matter what gender someone identifies and presents as — it only matters what gender they were assigned at birth. If men are the oppressors and the source of women’s oppression, it follows that those men maintain that oppressive power, even after they transition. Their socialization as men, no matter how short-lived or plagued by gender dysphoria and violence, renders them agents of female oppression. Thus, many radical feminists ban trans people, and particularly trans women, from their politics and organizing spaces.

TERFs may argue that trans women do not share a reproductive system with cis women, and thus can’t understand women’s struggles for birth control and against forced sterilization. But then what do they say of solidarity with lesbian women, or cis women who cannot or choose not to have children? The arguments that TERFs put forth are both weak and prejudiced.

Radical feminism is also noticeably silent on the question of racism, and is burdened by a politically suspect strategy for fighting it.

Men of color perpetuate sexism just like white men. But their experience of racism also binds them together with the women of color in their communities. As Sharon Smith writes, “the need to fight alongside men in the fight against racism or in the class struggle [has] made separatist ideas unappealing” for women of color. 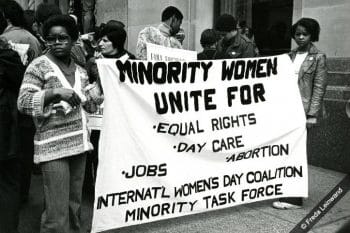 The Combahee River Collective, a legendary group of black feminist socialists, embodied this understanding, writing in their 1979 statement: “We need to articulate the real class situation of persons who are not merely raceless, sexless workers, but for whom racial and sexual oppression are significant determinants in their working/economic lives.”

Women cannot reduce their experiences of oppression merely to their gender. Most of us are workers. Many of us are mothers, people of color, members of the LGBTQ community, and more. We need to understand how all of these things are tied together in order to fight domination in all spheres — and in order to win.

How to Fight Women’s Oppression

While radical feminists posit separatism as a political strategy — and for some, the goal — socialist feminists understand that our power lies in our numbers. The division between working-class men and women, between cisgender people and transgender people — these fissures are detrimental to our overall aims. They only make us weaker and our fight against capitalism that much harder.

Socialist feminists’ goal is to build solidarity across the entire working class. Our fates are tied together, and the struggle against gendered oppression is inseparable from the struggle against transphobia, racism, and capitalism more broadly. Any movement or theory of feminism that either explicitly or implicitly excludes trans people, intentionally misgenders them, or perpetuates transphobia has no business being on the Left.

Recently, Left Forum came under fire for including a panel that questioned the legitimacy of transgender people and their need for health care. After much controversy, it was ultimately cancelled — and rightly so. As the movement for transgender rights gains steam, the Left must be forthright in our solidarity with transgender and gender non-conforming people.

While there are things we can find inspiring within radical feminism, such as the emphasis on sexual violence, its analysis of the roots of women’s oppression and resulting ideas about how we should organize politically fall flat.

Rather than seeing men as the core source of women’s oppression, we must identify class society as the culprit. Fighting capitalism remains the only path toward women’s full liberation.

Erica West is a member of the International Socialist Organization and a graduate student at University of California Berkeley. She lives in Oakland.