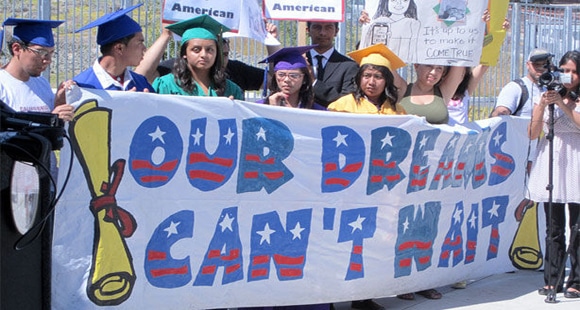 In a closed-door meeting Wednesday, Department of Homeland Security Secretary John Kelly announced to the Congressional Hispanic Caucus that DACA (Deferred Action for Childhood Arrivals), a program that grants work permits to more than 800,000 undocumented immigrants, will likely soon be dismantled.

The announcement comes two weeks after officials in 11 states wrote to Attorney General Jefferson Sessions threatening to sue the federal government if it did not rescind Obama’s DACA program by Sept. 5.

DACA was implemented in mid-2012 under the Obama Administration to boost Obama’s credentials among Latino voters. The move was not opposed by immigration officials, who saw it as an opportunity to accumulate lists of youth living in the US without documentation. As the WSWS wrote in 2012:

The implementation of the DACA program came three months before the presidential election. Implementation of the initiative—providing limited rights to a narrow section of immigrants—is at best a cynical gesture in an effort to court Latino voters. At worst, the information gathered in the application process could be used against immigrants and their families. The Obama administration has pursued an aggressive anti-immigrant agenda, rounding up immigrants in wide-scale sweeps and deporting them in record numbers, and this policy will not end with DACA.

The worst case scenario is now coming to fruition. All of the personal information needed to carry out deportations of these children and their families is conveniently in the hands of the Department of Homeland Security. The thousands of children who lined up for the chance at the limited rights offered by the program gave their names, addresses, countries of origin, their personal histories and signed a document admitting to being in the country illegally. The cost of this program was paid for by the immigrants themselves at $465 dollars apiece.

In addition to DACA participants, the status of many Central American immigrants was also called into question by the Trump administration during Kelly’s meeting. Members of the Hispanic Caucus reported that Kelly suggested that many federal programs which grant Haitians, Salvadorans and Hondurans temporary protected status (TPS) due to past disasters in their homelands are also at risk of being canceled or not renewed by the Trump administration. For Haiti and El Salvador, TPS faces renewal in January 2018, while El Salvador’s program currently ends next March.

TPS is intended to protect migrants from being deported to a country currently embroiled in war, environmental disaster or “other extraordinary and temporary conditions.” In June, the governments of El Salvador and Honduras pleaded with the US to extend TPS for their residents, fearing that the influx of hundreds of thousands of migrants will provoke a social explosion.

Deporting immigrants who have fled countries such as Haiti, El Salvador and Honduras could very likely be a death sentence for many of these people. These countries all share a common history of relentless intervention by American imperialism, leaving them each in a state of extreme poverty and with dire social conditions.

Five percent of the unaccompanied minors who cross the border come from the city of San Pedro Sula in Honduras. The city has the world’s highest murder rate, 187 murders per 100,000 in 2012, more than twice the country’s average of 90.4. The murder rates in El Salvador (41.2) and Honduras (60) are amongst the worst in Latin America.

Those who choose to flee do so out of dire necessity. Many make the decision, and risk their lives to make the dangerous journey, in hopes of offering their children a better life. Many of their children have grown up thoroughly integrated into US culture, with some having no memory of their “home” country or knowledge of its norms or language.

These developments mark a significant ramping up of the anti-immigrant policies of the Trump administration. In addition to the threats laid out by Kelly this week, there have been numerous reports of asylum seekers being intimidated and even unlawfully turned away at the border by ICE agents. An initiative which aimed at arresting undocumented parents suspected of having paid to have their children ushered into the country by smugglers has been put into effect. All these measures are meant to terrorize and intimidate not only the immigrant population, but the working class as a whole.

The dismantling of DACA, the rescinding of asylum programs and the other anti-immigrant policies of the Trump administration have little support among the American people.