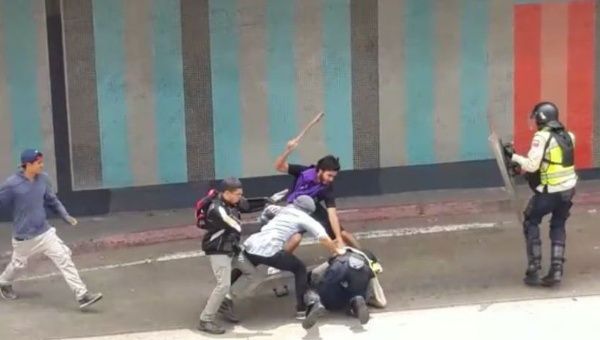 Opposition protesters gang up on and beat police officers. Telesur.

In recent weeks, a number of Venezuelan specialists on the left side of the political spectrum have published and posted pieces that place them in an anti-Chavista, “ni-ni” position that consists of “a plague on both your houses” with regard to Maduro and the Venezuelan opposition. Certainly, at this moment the Chavistas are playing hard ball; the options available to them are limited.

I consider myself a “critical Chavista.” It’s not an easy position to be in, particularly because the last thing I would want to do is to act in any way that would favor the right (that is the Venezuelan opposition and its allies abroad). On the other hand, I have always opposed (even in my writing) the position of some people on the left who feel that U.S. leftists should not publicly express criticisms of socialist governments. Criticism (including public criticism) is necessary as it is part of the process of assimilating lessons.

The recent articles that harshly attack the Maduro government have been published in Jacobin magazine by Gabriel Hetland and another by Mike Gonzalez, as well as Hetland’s piece posted by NACLA: Report on the Americas in which he uses the expression “que se vayan todos.” More recently NACLA posted an interview with Alejandro Velasco that was originally published in the magazine Nueva Sociedad.

I know a number of people in Venezuela and academia in the U.S. and elsewhere who I used to see eye to eye on with regard to Chavez and I now find them expressing total rejection of and even animosity toward the government. The only thing that binds us now is our common support for the need to defend Venezuelan sovereignty, and sometimes not even that.

Arguments of the ni-ni position that I agree with

1. CORRUPTION IS AN EXTREMELY SERIOUIS PROBLEM IN VENEZUELA, which the government has not done nearly enough to combat, though some timid measures have been taken (eg. over the last 6 months in the oil industry).

2. THE GOVERNMENT HAS VIOLATED CERTAIN DEMOCRATIC PRINCIPLES – the decision to strip Henrique Capriles of the right to participate in elections on grounds of corruption; and the delay of the gubernatorial elections; but not the decision not to hold the recall in 2016 (since the opposition didn’t have their act together on that one).

3. THE NEGATIVE ROLE OF THE “STATE APPARATUS AND THE CHAVISTA ELITE” – Velasco begins his interview with these words. I agree that the state bureaucracy and Chavista elite have stifled internal Chavista democracy and in doing so have discouraged mobilization. Nevertheless, I also recognize that this bloc (the Chavista bureaucrats) buttresses the Chavista hold on power as it has a mobilization and organizational capacity that would be lost should Maduro unleash a “revolution within the revolution.” Hastily turning power over to the rank and file would have disastrous immediate consequences. Thus, for instance, Chavez’s decision to implement the Plan Guayana Socialista in which the workers chose the presidents (known as “worker presidents”) of state companies in the Guayana region was a failure because the labor movement in those firms, almost 100 percent Chavista, went at each other’s throats.

4. THE CHAVISTA MOVEMENT HAS LOST A LARGE NUMBER OF ITS ACTIVE SUPPORTERS. In addition to the factors named by the “ni-nis” (corruption, government bungling, etc.) there is the factor of “desgaste” (wearing down process over time) which is inevitable and doesn’t in itself reflect negatively on the Chavista leadership. Eighteen years is a long time.

Arguments of the ni-ni position that I disagree with

1. THE MADURO GOVERNMENT IS AUTHORITARIAN OR HEADING IN AN AUTHORITARIAN DIRECTION, which at this point is my most important disagreement with the “ni-nis.” Those who make this statement never acknowledge the importance of context. They recognize, though in some cases they play down (not so in the case of Hetland’s Jacobin piece), the violent activity unleashed by the opposition, but don’t relate the state’s police actions to the challenges it is facing. Just to provide one example. A totally anti-government hostile communications media encourages the audacity and extremism of the opposition for two reasons. First the police and National Guard are held back from responding firmly and without hesitation and thus they lose their dissuasive capacity. And second, the protesters themselves feel empowered. Both factors play on each other. In the U.S. or any other country, the corporate media (and some of the alternative media) would be completely sympathetic to the actions of security forces, even their excesses, in a situation of urban paralysis and urban violence over such an extended period of time (it’s been three and a half months). Furthermore, to use the term “authoritarian” when the local media is so supportive of the opposition, is simply misleading. It is true that the national TV channels (specifically Televen, Venevision, and Globovsion) are less hostile to the government than in 2002-2003 but they (perhaps with the exception of Venevision) are still more pro than anti-opposition. But almost all of the important written media both nationally and locally are vocally anti-government. And in the case of the international media, the bias has no limits.

Finally, there are valid criticisms of the Chavista-chosen methodology for the Constituent Assembly election to be held on July 30, but that doesn’t make Venezuela authoritarian. In 18 years of Chavista rule, there has never been plausible evidence of electoral fraud. Compare that with the dubious legitimacy of last month’s elections in the state of Mexico City, hardly unique for that nation.

The real elephant in the room is the gubernatorial election of December of this year, which the Maduro government is committed to holding. Those contests, to be held in just five months from now, will measure popular support. And they will put to the test the democratic commitment of both the government and the opposition. In my opinion the radical fringe of the opposition would prefer to reach power through force in order to crush the Chavista movement and impose neoliberal policies – “shock-treatment” style – rather than reach power through electoral means, in which case their options would be more limited.

2. THE GOVERNMENT IS NOT SINCERE ABOUT DIALOGUE, according to Velasco – there is no evidence one way of the other on this one.

3. THE CHAVISTA RANK AND FILE HAS LITTLE REASON TO ACTIVELY SUPPORT THE MADURO GOVERNMENT and for that reason two million of them abstained in December 2015. Although obviously disillusionment is widespread, there are many important reasons for progressives and popular sectors to support the Maduro government: nationalistic foreign policy, rejection of neoliberal type agreements with international financial institutions, social programs that involve community participation; zero-sum-game policies that favor the popular sectors (example: the Bus Rapid Transit – BRT – that in Barcelona-Puerto La Cruz reserves one of two lanes on the main drag connecting the two cities to accordion-type buses at the expense of automobile traffic); and finally Maduro (in spite of all of his shortcomings as an administrator and failure to take necessary bold decisions) has proven to be a fighter and to convince his base that he’s not going to go down without a struggle to the end. He has also attempted to mobilize his base; the failure to attempt to do so by Lula and Dilma Rousseff is a major reason why the impeachment against the latter went through.

4. VENEZUELA’S ECONOMIC DIFFICULTIES ARE NOT ABOUT LOW OIL PRICES BUT ABOUT GOVERNMENT INEPTNESS. In fact, there are three causes of the economic crisis and they all have approximately the same weight: low oil prices, the economic war (with Julio Borges’s public campaign against multinational investments in Venezuela, the existence of an economic war is clearer to see than in the past), and erroneous government policies. With regard to the latter (and here I probably diverge somewhat from Mark Weisbrot), I believe that decisions on economic policies were necessary and urgent, but that there were no easy and obvious choices and any one that was made would have come with a price, both politically and economically.

5. GOVERNMENT INTRANSIGENCE IS DUE TO THE FACT THAT THE CHAVISTA LEADERS DON’T WANT TO LOSE THEIR PRIVILEGES. This statement is misleading, even while there is undoubtedly an element of truth in it. But the statement assumes that Chavista leaders are all cynics and without any sense of idealism. Where is the scientific evidence to support this claim?

6. ATTORNEY GENERAL LUISA ORTEGA DIAZ REPRESENTS A NUETRAL POSITION WHICH THE MADURO GOVERNMENT IS UNWILLING TO TOLERATE. In fact, regardless of her motives, she has assumed an explicitly pro-opposition position. In such a critical situation in which the opposition openly proposes anarchy as a means to unseat Maduro, it makes sense that the Chavistas are attempting to remove her from office.

In short, I believe in the conclusive need to support the Venezuelan government in spite of the numerous criticisms that I have (some more profound than others). With that, I am not arguing for non-discussion of the errors. Everything to the contrary, the Venezuelan experience needs to be analyzed from a critical perspective, especially because of the plausibility of the criticisms formulated by critical progressives and the thorniness of many of the issues that have been raised. But there is a long tradition of purism on the left that runs counter to the position of the “critical support” that I advocate.

First published by teleSUR English, adapted and expanded for Venezuelanalysis.