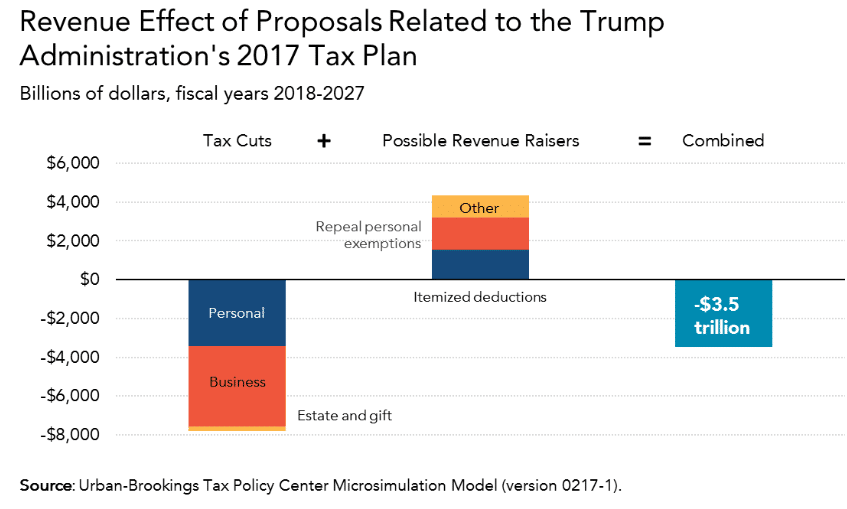 A new analysis by the Tax Policy Center finds that the tax cuts included in the Trump administration’s outline for tax reform released in April could cut federal revenues by as much as $7.8 trillion over 10 years, and that the benefits would go almost exclusively to the top 5 percent of earners.

Even if the plan included some very large tax hikes to offset the cuts (like doing away with personal exemptions and other common deductions) and taking into account effect on economic growth, the cost still comes to $3.4 trillion over 10 years. The cost would be even greater once you take into account the interest the US would have to pay on all that debt. For context, a $3.4 trillion tax cut would amount to about 12 percent of GDP in 2027, slightly larger than all the tax cuts George W. Bush passed while in office. 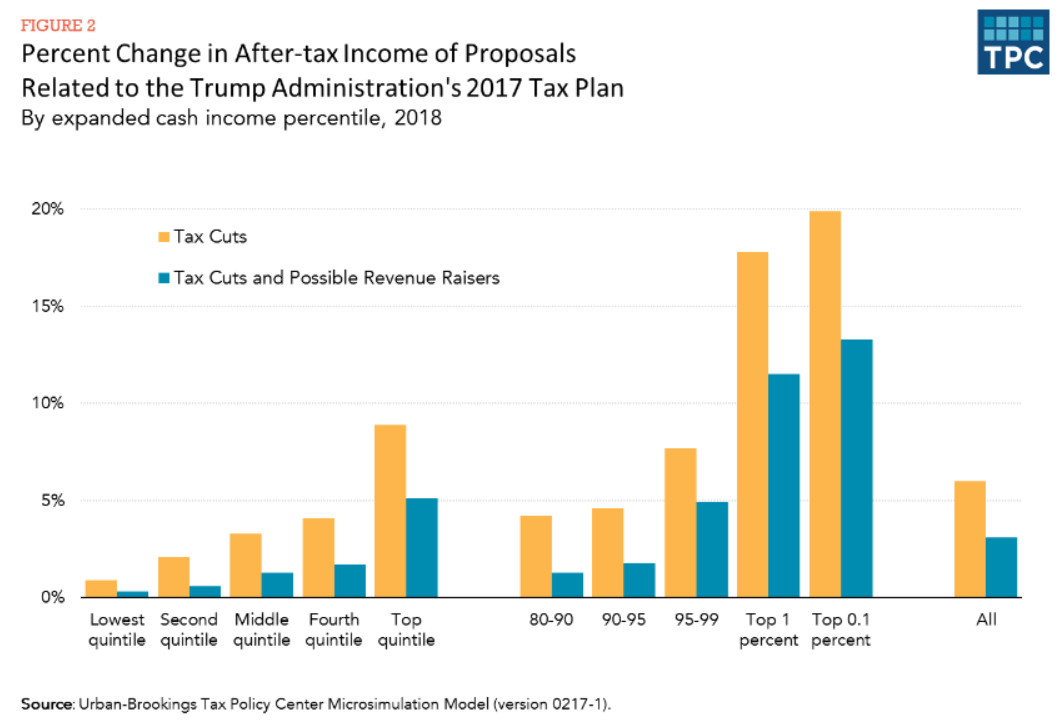 “The Implications of What We Know and Don’t Know about President Trump’s Tax Plan,” Tax Policy Center, p. 9.

What the Trump tax plan does

Donald Trump issued no less than three tax plans on the campaign trail, each subtly different from the last. Then on Wednesday, April 26, National Economic Council Chair Gary Cohn and Treasury Secretary Steve Mnuchin introduced a slightly tweaked outline of a plan at a White House press briefing. The outline pledged to: 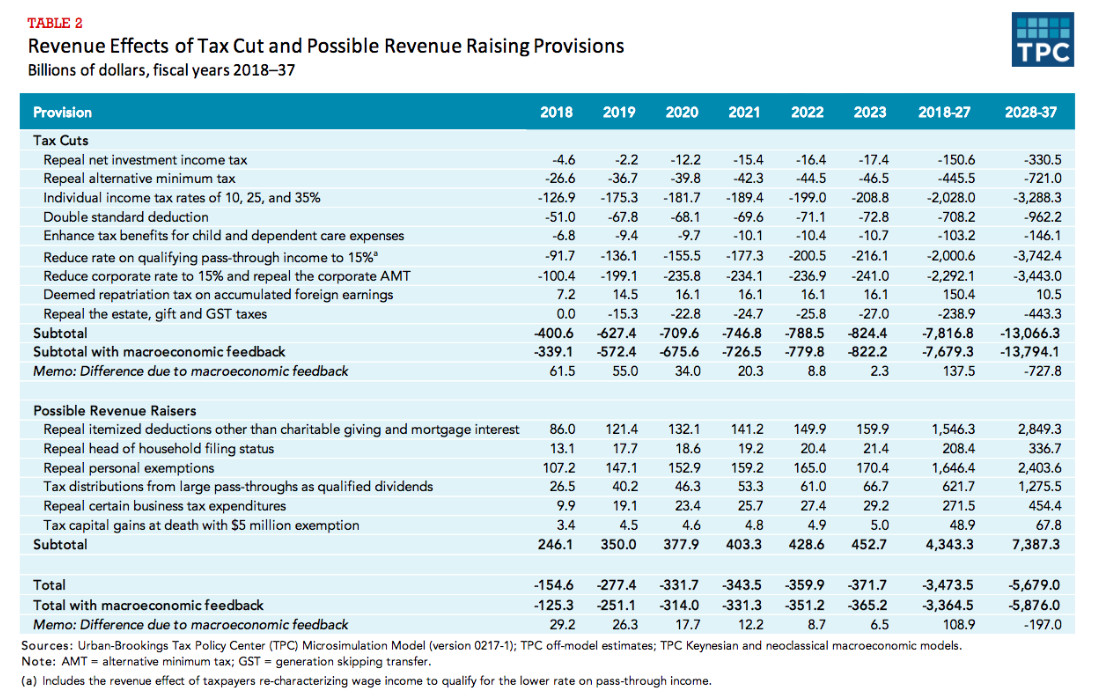 “The Implications of What We Know and Don’t Know about President Trump’s Tax Plan,” Tax Policy Center, p. 8.

These are the provisions that, put together, cost $7.8 trillion over 10 years.

The most costly elements, according to TPC, are the corporate rate cut ($2.3 trillion over 10 years), the individual rate cuts (also $2 trillion), and the new lower rate for pass-through income ($2 trillion). Pass-through companies — owner-operated businesses whose profits are taxed as individual income — are overwhelmingly owned by rich people, so cutting the top rate on income from them from 39.6 percent under current law to 15 percent under Trump’s plan is a huge, regressive, cut. It would also encourage tax evasion by spurring high-income people to stop earning wages from their employers and instead form pass-through businesses that their employers can pay instead, to take advantage of the new low rate.

But at least in theory, the Trump administration wants its tax reform package to pay for itself, perhaps after accounting for economic growth effects. Republicans in the House have proposed a few ways to do that, most notably by adding a new border adjustment tax, which in the long run doesn’t raise any money but would be scored as raising money in the short term. The Trump administration, however, has been a little hot and cold about that idea.

Mnuchin and Cohn’s outline included a few vague hints at ways to raise revenue. It promised “targeted tax breaks” for individuals and “special interest” breaks for corporations. It promised to preserve the home mortgage interest and charitable deductions but implied that all other itemized deductions (such as for state and local taxes) were gone.

In the 2016 campaign, the Trump campaign also floated a few other ways to raise revenue that didn’t make it into the administration outline, like repealing “head of household” filing status for single parents, repealing personal exemptions for taxpayers and their dependents, still subjecting “large” pass-through businesses to individual tax rates, and imposing capital gains tax on certain wealthy estates upon death, so that valuable assets that were never taxed in a person’s life could be taxed.

The TPC paper takes all these together and tries its best to estimate what they’d raise. Put all together, they raise about $4.3 trillion over 10 years. That’s no small amount — but it’s also not nearly enough to pay for $7.8 trillion in cuts. Further, it’s worth asking whether these are revenue raisers that the Trump administration is actually willing to countenance. Would Donald Trump, a wealthy person living in a high-tax liberal state, really do away with the state and local tax deduction, which predominantly helps people like him? Would he really raise taxes on wealthy estates like his own?

Usually, when challenged on the numbers for its tax proposals, the Trump administration has insisted that they’ll lead to large-scale economic growth, which can largely offset the cost. The TPC finds that this isn’t the case. The total plan, incorporating both revenue raisers and tax cuts, would cost $3.5 trillion over 10 years before taking economic growth into account, and $3.4 trillion after you take it into account. You only raise $108.9 billion from growth effects.

“We emphasize that we are not analyzing the Trump administration’s tax plan: the released outline contains too many unknowns to do so,” TPC emphasizes. It had to fill in a lot of vague parts of Trump’s plan to produce numbers. But the report does indicate that the Trump plan will likely be very regressive, and very expensive.