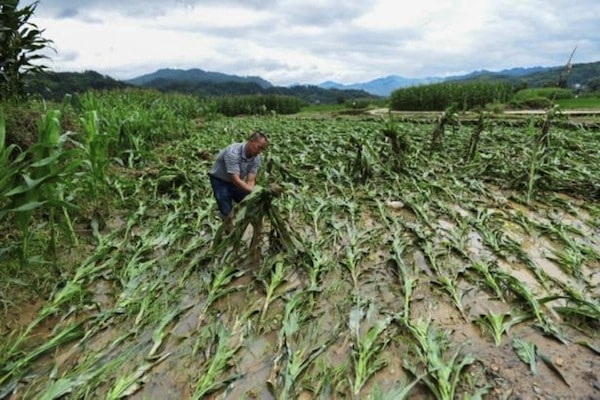 Governments may be seriously underestimating the risks of crop disasters occurring in major farming regions around the world, a study by British researchers has found.

The newly published research, by Met Office scientists, used advanced climate modeling to show that extreme weather events could devastate food production if they occurred in several key areas at the same time. Such an outcome could trigger widespread famine.

The scientists, led by Chris Kent, of the Met Office, focused their initial efforts on how extreme weather would affect maize, one of the world’s most widely grown crops. Heat and drought were the prime risks, although flooding was also included in the analysis.

The group found there is a 6% chance every decade that a simultaneous failure in maize production could occur in China and the US – the world’s main growers – which would result in widespread misery, particularly in Africa and south Asia, where maize is consumed directly as food.

“The impact would be felt at a global scale,” Kent told the Observer. “This is the first time we have been able to quantify the risk. It hasn’t been observed in the last 30 years, but the indications are that it is possible in the current climate.”

An example of the kind of disaster that could occur is provided by the maize harvests that failed last year in Africa. Communities in Zambia, Congo, Zimbabwe, Mozambique and Madagascar were affected and six million people were left on the brink of starvation. A joint failure of China and America’s maize harvest would have a far greater impact.

Having studied the risks facing maize production, the group is now following up this work by studying climate impacts on the world’s other staple crops – in particular rice, wheat and soya beans – in order to assess how weather extremes could affect their production.

According to the UN Food and Agriculture Organisation, maize, rice and wheat together make up 51% of the world’s calorie intake. Billions of people rely on these crops for survival. Any disruption to their production would have calamitous consequences.

The trouble is that crop-growing methods and locations have changed considerably over time, as has the climate and the probability of extreme events, Kent told the Observer. “This means the number of relevant observations to the present-day growing of stable crops has been reduced, and that limits our ability to have useful estimates of the risks to the growing of these crops.”

To get round this problem, the team ran 1,400 climate model simulations on the Met Office’s new supercomputer to understand how climate might vary in the next few years and found that the probability of severe drought was higher than if estimated solely from past observations. The scientists concluded that current agricultural policies could considerably underestimate the true risk of climate-related shocks to maize growing and food supply.

The particular risk outlined by the study envisaged simultaneous catastrophic disruptions in China and the US. In 2014 total world production of maize was around 1 billion tonnes, with the US producing 360 million tonnes and China growing 215 million. If production in these two countries were hit by simultaneous extreme weather events, most likely droughts, more than 60% of global maize production would be hit.

A double whammy like this has never happened in the past, but the work by the Met Office indicates that there is now a real risk. In addition, there may be risks of similar events affecting rice, wheat or soya harvests. These are now being studied by the Met Office, which is also working with researchers in China in a bid to understand climate risks that might affect agricultural production.

“We have found that we are not as resilient as we thought when it comes to crop growing,” said Kirsty Lewis, science manager for the Met Office’s climate security team. “We have to understand the risks we face or there is a real danger we could get caught out. For now we don’t have the means to quantity the risks. We have to put that right.”