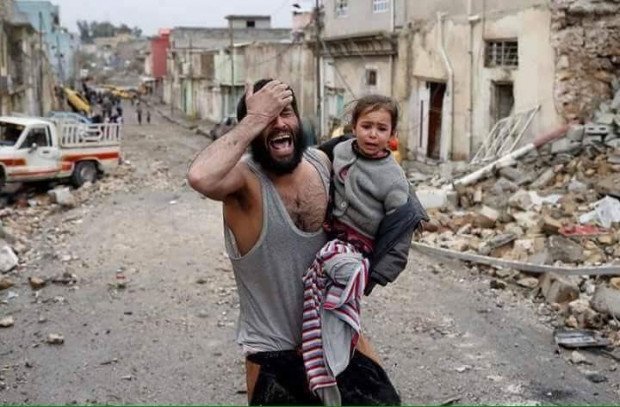 Earlier this week, human rights group Amnesty International issued a lengthy report accusing US-backed forces of “repeated violations of international humanitarian law, some of which may amount to war crimes,” in Mosul, Iraq, causing the deaths of at least 3,700 civilians. Neither this report, nor the broader issue of the civilian toll in the US war against ISIS, has come close to penetrating US corporate media.

The only major radio or television outlet to report on Amnesty’s claims was NPR (7/12/17). While traditional print outlets, such as the New York Times and Washington Post, did run Reuters (7/11/17) and AP(7/12/17) articles, respectively, on the report, neither covered it themselves. Neither Amnesty’s charges, nor the broader issue of civilian deaths in Mosul,  garnered any coverage in television news, with no mention on ABC, NBC, CBS, CNN or MSNBC.

The expulsion of ISIS from Mosul by the US-led coalition did receive coverage, but the US role in killing civilians was uniformly ignored.

CBS News’ reports (6/25/17, 7/4/17, 7/9/17) made no mention of US responsibility for civilian deaths, referring only vaguely to “a rising civilian death toll” and “whole neighborhoods” that “cease to exist.” The role of US bombing role in that rising death toll or those no-longer-existing neighborhoods was never mentioned.

In one report (6/23/17), correspondent Charlie D’Agata, standing over a pile of rubble, said to the camera, “Whole buildings, whole neighborhoods have been wiped out, this is what it cost to get rid of ISIS.” Who helped “wiped out” the buildings and neighborhoods is left a mystery.

One slight exception was ABC Nightline (7/14/17), which reported on summary executions and torture by Iraqi special forces, but made no mention of direct US responsibility for the bombing of Mosul. It did, however, accuse the US of “turning a blind eye” to crimes committed by others.  The remaining ABC News reports (7/5/17, 7/12/17), like the others, overlooked US-caused civilian casualties.

One 10-minute report for Nightline (7/12/17) made reference to “thousands killed,” but pinned the blame for those deaths squarely on ISIS. After hearing an airstrike in the distance, correspondent Ian Pannell sang the praises of bombing raids, insisting, “It’s hard to imagine that [Iraqi fighters] would have got this far forward—despite their brave fighting—without their support.” He then profiled two victims of US-led airstrikes and Iraqi army gunfire, but said they were “forced to help [ISIS], they were used as human shields. ISIS fighters made them run into the line of fire of the advancing Iraqi army.”

(To be clear, as Amnesty pointed out, ISIS certainly is using civilians as human shields, but this doesn’t nearly account for all casualties: The US and its allies “continued to rely upon imprecise, explosive weapons, ignoring the ever-growing toll of civilian death and injuries.” Similarly, civilians in Aleppo were not allowed to leave by jihadist groups like Jabhat Fatah al-Sham, according to the UN, but Russia and Syria still bombed heavily for years.)

NBC/MSNBC stuck to a similar line. In one nine-minute segment (MSNBC, 7/14/17), Andrea Mitchell didn’t mention Iraqi civilians once, much less their massive death toll—and incidentally painted Bush’s 2003 invasion of Iraq, which killed an estimated half million people, as an unfortunate error, insisting it was full of “tragic miscalculations.”

A separate segment by Richard Engel (MSNBC, 7/14/17) on Pete Reed, an ex-Marine who is treating civilians in Mosul, made no mention of deaths caused by US bombing, instead—as with ABC’s Ian Pannell—framing all the deaths as the sole responsibility of ISIS. After showing a 12-year-old girl blinded by shrapnel, Engel opaquely refers to “an airstrike” that caused the injury, but curiously doesn’t say whose airstrike it was. He then insists the doctor treating her wouldn’t be able to do so under the Islamic State, because she is female—thus turning the treatment of a victim of a US airstrike into evidence of why that airstrike was justified. Everything is reframed as pro–US bombing, even when highlighting the victims of said bombing.

Can one imagine this frame in reporting on Russia’s siege of Aleppo? Can one imagine highlighting Syrian and Russian doctors, treating the very civilians their governments just bombed, in such an uncritical manner? Can one imagine the US media blaming all the deaths caused by Russian bombing as the sole fault of those occupying the city?  Unlike reporting on Aleppo (FAIR.org, 1/4/17), Engel makes no mention of civilian deaths caused by US bombs, no figures, no mention of war crimes, no mention of Trump’s open disregard for civilian casualties. It’s a breathless Pentagon press release that never questions the motives or effect of Trump’s bombing campaign.

Obviously, the two instances aren’t exactly the same, but the stark 180-degree difference in how the Russian and US sieges were covered is an object lesson in nationalistic ethos. Because ISIS is seen as an unmitigated evil, and the US as an unmitigated good, no death toll is too high. Indeed—no death toll is even worth mentioning. The Americans rode in, the baddies got theirs, and any costs to human life US bombing may have caused are incidental and unworthy of mention.