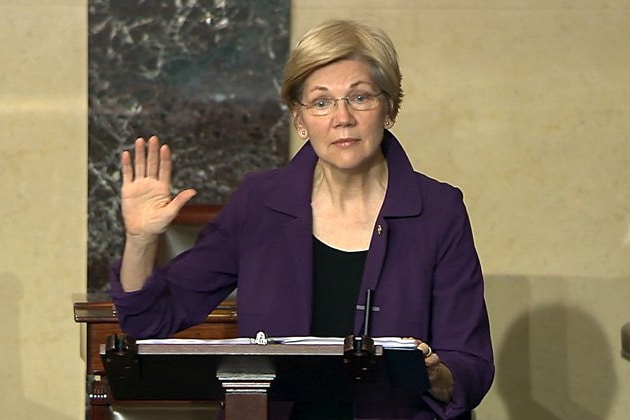 When the Washington Post‘s Paul Waldman (9/18/19) recently attempted to explain Elizabeth Warren’s rise in the Democratic primary polls, he attributed it in part to media:

Reporters on the campaign trail have said for some time that she is the one who generates the most enthusiastic response among voters on the ground. A rise in her poll standing inevitably produces stories about what she’s doing right, stories that get filled with the impressions those reporters have accumulated.

The resulting positive news coverage encourages more Democrats to feel favorably toward her, or at the very least give her a careful look. Which leads to poll numbers that continue to improve, which leads to more positive press coverage, and the cycle goes on.

It’s a logical path from enthusiastic crowds and rising poll numbers to news coverage about what a candidate is doing right. But it’s certainly not an inevitable one; media coverage is a product of editorial decisions, not laws of nature. And four years ago, when another Democratic primary candidate was drawing enthusiastic crowds and rising in the polls, it prompted a very different kind of coverage (e.g., FAIR.org, 7/1/15, 8/20/15, 8/21/15).

Why has Warren—who has positioned herself as Bernie Sanders’ closest ideological competitor, and a vocal crusader against corporate control over the political system—so far escaped the scathing and skeptical coverage Sanders has received? The answer has to do with both the differences in how the two candidates frame themselves, and the way major media cover elections. 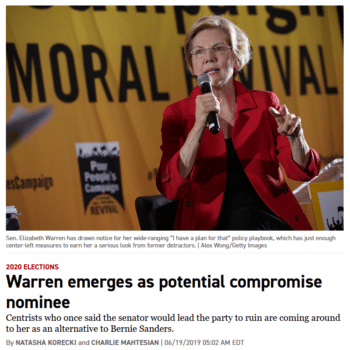 As FAIR has shown over and over, corporate journalists’ rolodexes skew heavily toward establishment sources: party officials, strategists and operatives (Extra!, 7–8/14;  FAIR.org, 6/1/17), and centrist and right-leaning think tank analysts (FAIR.org, 7/1/13).

Those sources are almost uniformly and vehemently anti-Sanders, and have been at least since his run against Hillary Clinton in the last election provoked their deepest antipathy (FAIR.org, 6/28/19, 8/15/19). But—no doubt in part because Sanders has helped shift the center of the party so much in recent years—many see Warren as a more acceptable alternative.

Even Third Way, the pro-corporate think tank that in 2013 warned in the Wall Street Journal (12/2/13) that Warren was leading Democrats “off a populist cliff,”  has warmed up a bit to her (Politico, 6/19/19). Politico quoted an attendee at a Third Way conference—who says he likes Warren’s consumer protection policies and infrastructure plan—describing the shift: “People are taking a second look at her and saying, ‘Hmm. Some of her policies are good. Maybe she isn’t like Bernie.’”

“She isn’t like Bernie” seems to be the take thus far of much of the Democratic establishment, which, as the New York Times (8/26/19) reported recently, Warren has been working hard to convince she “is a team player who is seeking to lead the party—not stage a hostile takeover of it.” 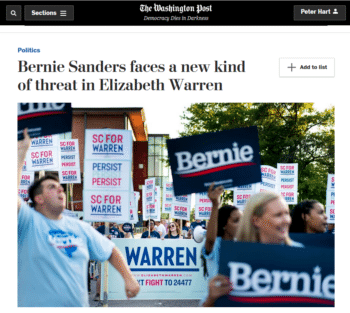 The Washington Post (6/24/19) contrasts the “impassioned but reasonable” Warren with Sanders, “the ideological outlier in the race.”

By reassuring the kind of party insiders the media rely heavily on for framing their stories, Warren has largely avoided the kinds of aspersions—often anonymous—lobbed at Sanders. For instance, the Washington Post (6/24/19), under the headline “Sanders Faces a New Kind of Threat in Elizabeth Warren,” wrote that Sanders’ strategy of

doubling down on his ideological purity and socialist credentials carries risks for the senator from Vermont, other Democrats say. It’s enabled Warren to position herself as impassioned but reasonable, while Sanders holds down the leftward flank of the Democratic Party and serves as the ideological outlier in the race.

Later, in an article headlined “Bernie Sanders’ Supporters Find Anger Not as Compelling This Time Around,” the Post (8/30/19) wrote that Warren offered a new option for voters “who are turned off by his tenor.” After describing Warren and Sanders as “more similar than different when it comes to policy goals,” the Post explained that “where the candidates —Sanders a democratic socialist and Warren a proud capitalist—diverge is in the tenor of their campaigns.” To support this claim that “tenor” is the key difference between the “democratic socialist” and the “proud capitalist,” the paper turned to a Brookings Institution fellow who worked for Bill Clinton:

It’s not as though [Warren is] content to thunder against the evildoers like an Old Testament prophet. That’s much more his mode. Sanders sees [his campaign] as a revolutionary mass movement to upset the established order. While Senator Warren is obviously very dissatisfied with the status quo, she describes her campaign in very different terms, and terms that I think are less scary.

The question this raises, obviously, is who might be scared by those terms? Warren, who emphasizes that she is “a capitalist to my bones,” inspires less fear than Sanders, not just among the centrist party insiders who make up a large bulk of media sources, but also, no doubt, among the owners and sponsors of major news outlets.

Moreover, with Biden entering the race as the immediate frontrunner and Sanders as the clearest top rival, given his strong showing against Hillary Clinton in 2016, Warren has drawn less fire from competitors as well—which is beginning to change, as Politico (8/30/19) and the Post (9/18/19) have noted.

In opinion sections, Warren is accumulating a fan club among those meant to represent the left. (The right, unsurprisingly, is taking her as a serious threat—Vice, 9/12/19.) While it’s hard to find a columnist in a major newspaper who says positive things about Sanders, many have professed a fondness for Warren.

At the New York Times, the love has been particularly flowing. Nicholas Kristof calls her “serious” (6/26/19), Farhad Manjoo (6/6/19) finds her “impressive,” and Gail Collins (8/27/19), defending Warren against right-wing columnist Bret Stephens, pulled out the capitalist card: “Elizabeth Warren is a capitalist. She understands the economic system better than any other candidate.” 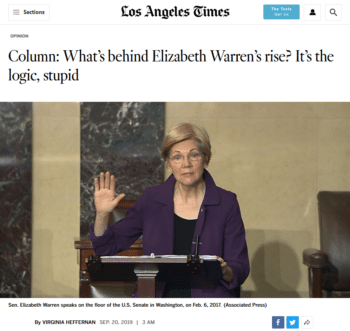 The LA Times‘ Virginia Heffernan (9/20/19) praises Warren for not “caterwauling about revolution” like Sanders.

For the LA Times‘ Virginia Heffernan (9/20/19), Warren offered a stark contrast to Sanders (and Biden):

At a time when Bernie Sanders is, with few details, caterwauling about revolution, and Joe Biden is turning to incoherent sentimentalism, [Warren’s] logic is a breath of fresh air.

Heffernan sees Sanders as antagonistic toward the middle class (“the bourgeoisie, the dread middle class to Democratic socialist Bernie”), whereas “Warren makes it clear she believes that what’s greatest about America is the bourgeoisie, and those striving to join it.”

And yet, many of Warren’s famous plans are still deeply worrying to journalists’ main sources (not to mention those news media owners and sponsors). So while Warren is often favorably contrasted to Sanders, she is at the same time the target of “gotcha” articles like the New York Times piece (9/9/19) attempting to paint her as hypocritical for swearing off “big-money” donations for her presidential primary run while still using leftover funds from her Senate race that had made no such vows.

“Admirers and activists praised her stand—but few noted the fact that she had built a financial cushion by pocketing big checks the years before,” the Times‘ Shane Goldmacher wrote. Who were Goldmacher’s sources for the premise of the piece? Not any Warren supporters he talked to, who seemed pleased that she had renounced such donations, but “some donors and, privately, opponents” who “are chafing at her campaign’s purity claims.”

Piling on, the Washington Post gave an op-ed column (9/11/19) to one Times source who seemed to take her new position particularly personally—former Pennsylvania Gov. Ed Rendell, who fundraised for Warren’s Senate race and then for Biden’s 2020 presidential bid, and pouted that where he once got a “glowing hand-written letter from her for my hard work,” he’s now being demonized:

It’s one thing to fashion a campaign that relies on grassroots fundraising, but it’s another to go out of your way to characterize as power-brokers and influence-peddlers the very people whose support you have previously courted. 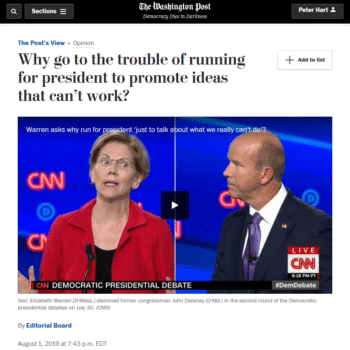 The Washington Post (8/1/19) compares Warren’s support for Medicare for All to Prohibition and the Vietnam War.

Likewise, while the op-ed pages might make room for Warren praise, at some of the big papers the editorial board’s own stance is decidedly more antagonistic. After the CNN primary debate—in which Warren sharply defended her positions with the widely quoted line, “I don’t understand why anybody goes to all the trouble of running for president of the United States just to talk about what we really can’t do and shouldn’t fight for”—the Post (8/1/19) pushed back against her “ideological grandiosity” under the snide headline, “Why Go to the Trouble of Running for President to Promote Ideas That Can’t Work?”

And, unsurprisingly, the Wall Street Journal editorial board  (8/9/19) isn’t buying what Warren is selling: “She must have a strange definition of capitalism. Every policy she proposes would increase government control over the private economy.” (The New York Times editors have yet to weigh in directly on Warren.)

These kinds of takes heavily populate opinion pieces, news stories and debate questions that focus on the progressive policies Warren espouses, with an endless drumbeat of calls for “pragmatism” (FAIR.org, 8/21/19) and warnings against the “risk of political backlash” for moving too far to the left (FAIR.org, 7/2/19).

Moreover, Warren will unquestionably continue to face the same kinds of misogynistic coverage every prominent female politician has long faced about her looks (e.g., CBS This Morning, 7/31/19) and capability (Extra!, 3/01). “Is Elizabeth Warren a Serious Contender After All?” asked New York magazine (5/28/19). “Many Democrats Love Elizabeth Warren. They Also Worry About Her,” declared a front-page New York Times headline (8/15/19) over a lengthy article that, more than a year before the general election, highlighted “persistent questions and doubts” about whether Warren is electable, no matter her popularity.

But as long as Sanders is in the race, he will no doubt continue to draw the most intense fire. If Warren ever finds herself without media’s bête noire to draft off of—assuming her policy stances remain the same—the media headwinds can be expected to get much more intense for her.