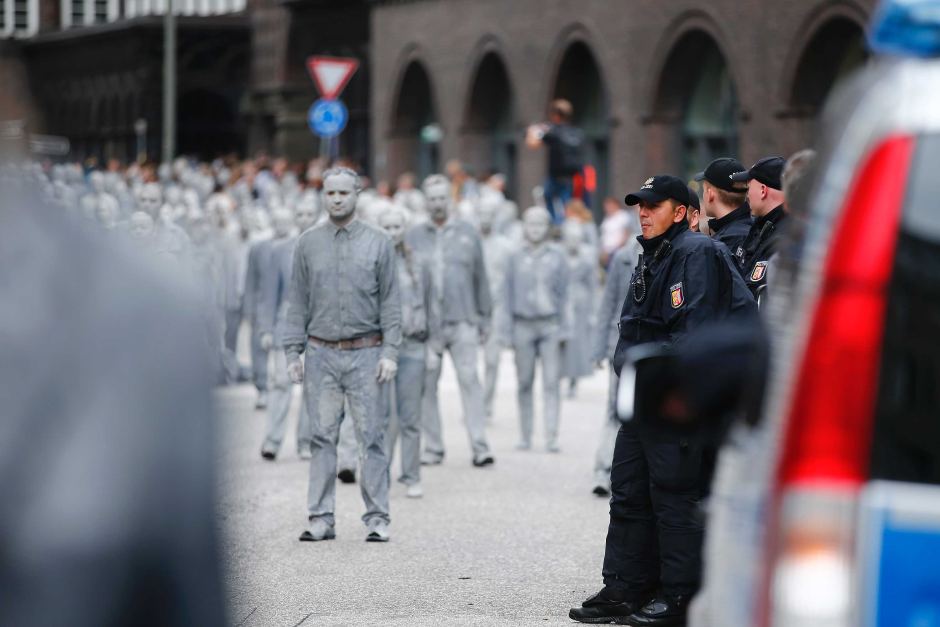 Participants march in the ‘1,000 figures’ demonstration

This is the story of eight people who together own as much wealth as one-half of humanity, or 3.5 billion of the planet’s inhabitants. These eight people have some good friends, who met last weekend in Hamburg. Twenty heads of state discussed over two days the best way to guarantee that their eight friends, and also they themselves, would become even richer. Welcome to the G20.

These twenty heads of state and government manage countries that account for 90% of the wealth produced in the world. Together, they discussed the world economy, trade, finance, geopolitics . . . and defined the lines of capitalist development that first of all benefit shareholders of the multinationals. There are no parliamentary debates on the objectives set during the G20 meetings, and what is discussed remains mostly secret.

The problem is that their decisions have consequences for everyone’s future: global warming, increase in social inequalities, military interventions, and an escalation of the danger of war. That is why thousands of people gathered in Hamburg to make their voices heard.

The summit of the twenty powers was held right in the center of the city–which is quite nice to visit, by the way–leading to a lot of complications for the city’s population. Tram lines were interrupted, streets closed to traffic, stores and offices closed, resulting in technical unemployment for numerous workers. Anna and her brother-in-law, Ciprian, lost two days wages: “Why didn’t Angela Merkel organize it in a more isolated place? Is she going to reimburse us for the lost income?”

It was also a few hundred meters from the Sankt Pauli district, where radical left movements have long been active. The district is also known for its football club, FC Sankt Pauli, whose supporters, disgusted by the turn towards racism and hooliganism of the city’s other club, Hamburg SV, provided the club with a “constitution” that defines it as “feminist, anti-homophobic, antifascist, and antiracist.”

An Entire Week of Mobilization

For an entire week, there were actions, flash-mobs, meetings, and discussions on ways of organizing another society. A delegation from the Workers’ Party of Belgium (PTB), invited by the German Communist Party, participated in a round table with participants from the Czech Republic, Sweden, Portugal, and Venezuela on July 7. Churches, stadiums, and a theater opened their doors to the anti-G20 demonstrators, while the city did everything to prevent them from camping. There were gatherings of artists, demonstrations on bicycles and boats, a dance protest, giant banners hoisted at unlikely locations, and concerts.

On Friday, the first day of the summit, various actions took place throughout the city. The port of Hamburg, the third largest in Europe, was partially blocked by activists who wanted to prevent the free circulation of commodities just like the European Union prevents the free movement of those fleeing the war in Syria. Massive sit-ins were organized at several crossroads. As a result, the spouses of the heads of state and government had to remain shut away inside their hotels and Jean-Claude Juncker, president of the European Commission, and Donald Tusk, president of the European Council, arrived late to the meeting. 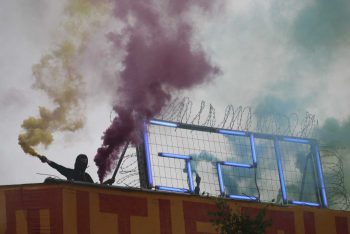 All of that was not seen on television since the media preferred to show the incidents provoked by a small minority and made worse by the police, who were present in large numbers. No fewer that 20,000 police officers were deployed to protect this small club of heads of state, who decided on our future in hiding. Andreas Beuth, lawyer and legal representative of the Rote Flora, the largest squat in Hamburg, declared to Mediapart that he was “obviously opposed to residents’ property being destroyed,” but he insisted that “these small groups have nothing to do” with the demonstrations envisaged by the organizers.

Sahra Wagenknecht, leader of Die Linke (The Left) party: “In Hamburg, we first of all saw hooligans commit acts of violence, wreck the streets, burn cars, injure the police, and intimidate residents. That has absolutely nothing to do with the left and with the commitment to a more just world order. And the response strategy of the security forces was also a problem.”

For Peace, For the Earth 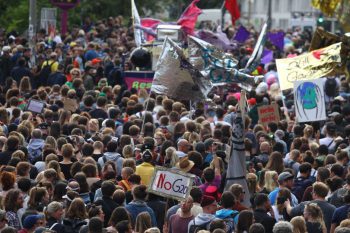 Crowd of anti-G20 protesters in Hamburg

This week of action ended with a huge demonstration of 80,000 people on Saturday, July 8. The assembly began in the morning and for three hours more and more people came to swell the ranks to support peace and the earth. There were trade union organizations, immigrant workers, support committees for refugees, numerous young people, women, pacifist organizations, environmental activists, Attac, members of parliament from left political parties (such as Die Linke, the communist parties, or the SP Nederland), doctors against nuclear war, LGBT associations, and even “papas and mamas against the G20.” On the platform, among others, was Esther Bejarano, an Auschwitz survivor. She denounced the violence of neo-Nazis who set fire to refugee welcome centers, the violence of terrorists in London, Brussels, and Paris, the bombing of civilians in Syria, and those who allow men, women, and children to drown in the Mediterranean. She concluded by saying: “But you are going to change all that. I believe in you!” Ordinary people, who came from all over Germany and even beyond, said “no” to the world order dictated by the law of the market and “yes” to cooperation between peoples and international solidarity. They showed that they want another world and that solidarity, diversity, and another society are possible. They might have the money, but we have the people.

Solidaire is a publication the Worker’s Party of Belgium (PTB). A subset of articles from the website are printed each month in French and Dutch.