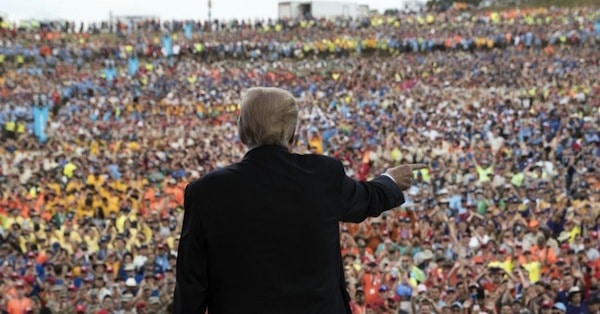 The annual Boy Scout Jamboree faced comparisons to a Hitler Youth Rally following President Donald Trump’s speech at the event on Monday night. The president spoke to 24,000 Scouts ranging in age from 12 to 18, as eight presidents have before him. Unlike previous presidents, however, Trump appeared to view the event as an opportunity to slam his political opponents and the news media, call for “loyalty,” and rail against the “cesspool” of Washington, D.C., as the audience cheered.

As he did in May while delivering a commencement speech at the U.S. Coast Guard Academy, Trump chose to focus on his own struggles in the White House and recall his victory in the 2016 election, turning an historically non-partisan event that generally focuses on public service into a campaign rally.

The Scouts, who Trump addressed as “young patriots,” erupted in cheers of “USA! USA!” as the president brought up familiar talking points from his campaign and his first six months in office. He spoke about his effort to repeal the Affordable Care Act, the war on political correctness (“Under the Trump administration, you will be saying, ‘Merry Christmas again'”), and interrupted his own recitation of the Scout’s Law to bring up his well-documented need for loyalty from his administration: “As the Scout Law says: ‘A Scout is trustworthy, loyal’…we could use some more loyalty, I will tell you that.”

In addition to breaking with tradition, Trump’s speech appears to have broken the Boy Scouts of Amercia (BSA)’s long-standing rule regarding Boy Scout’s participation in political events.

This is the Boy Scouts’ official policy on participation in political events. The short version: What happened tonight is against the rules. pic.twitter.com/Q3GvSypELb

Journalists and Trump critics noted similarities between Trump’s rhetoric at the Jamboree and that of Adolf Hitler when he addressed the youth organization of the Nazi Party.

Trump, for example, calls the media “FAKE NEWS,” Hitler/Nazis called it the “lügenpresse” (lying press). How is that different?

I really hate invoking Hitler because it is sensational 99% of the time but god damn does he make this look like a Hitler Youth rally. https://t.co/AmQMoZ8Woq

I feel like I’ve seen what is happening at the #BoyscoutJamboree before… pic.twitter.com/BfdnB5XaQM

On Tuesday morning, the BSA released a brief statement saying that the invitation to the president was “in no way an endorsement of any political party or specific policies.”

But critics called on the organization to issue a stronger disavowal of Trump’s speech.

Not a good enough response. He turned it into a political rally, which is against BSA rules. They should be admonishing his speech.

Lame, weak response. This @POTUS used these children for an unhinged partisan rant which you should properly condemn