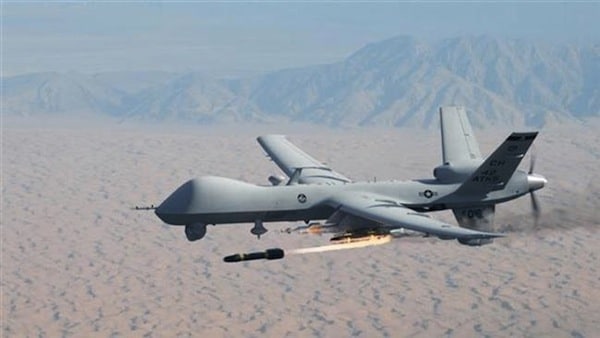 A US MQ-9 Reaper assassination drone

During the Obama presidency, precision was not just about hitting the right target, and it was more than mere accuracy. It was an ethos, one that enshrined the liberal-American desire to be just in times of war while still ensuring victory. Armed drones and the precision missiles they deployed were said to epitomize this desire. Drones were, the president stated, part of a “just war—a war waged proportionally, in last resort, and in self-defense.”

These claims were contentious. People such as Nobel laureate Desmond M. Tutu declared that these weapons undermined America’s “moral standards,” and non-governmental organizations such as Airwars—which monitors civilian casualties resulting from airstrikes in Iraq, Syria, and Libya—exposed the true cost of precision. For the Obama administration, though, drones continued to offer the alluring ability to kill at a distance while mitigating the cost to innocent life. Although mistakes were made, in an age when the United States led the world in the use of drones, these weapons appeared to offer a simple and unrivaled solution to the complexities of war.

In the post-Obama era, however, the drone landscape has changed. Not only has American dominance over the use of drones eroded—with a plethora of state and non-state actors acquiring drone technologies—but with the rise of a new presidential administration, the American search for just and proportionate precision appears to have been called off.

The long quest for “precision”

American precision warfare was never perfect. Nevertheless, during the Obama years, the administration made genuine attempts to minimize civilian casualties. Indeed, the moral and strategic search for precision has a long history in American warfare; the origins of Obama-era precision can be traced back to the Cold War nuclear context of the 1980s. Albert Wohlstetter, a prominent American nuclear strategist of that era, argued that conventional precision missiles could offer an alternative to massive nuclear destruction in the event of hostilities with a nuclear armed state. Thanks to advances in computer data gathering and transmission, missile range and yield, and offensive accuracies and reliability, precision missiles could provide an effective “discriminate deterrence,” Wohlstetter wrote. The logic was that precision missiles could guarantee the pinpoint destruction of enemy military targets around the globe without resorting to the nuclear option—and the civilian casualties that would come from nuclear war. This strategy was not used in the Cold War, but in the post-Cold War era precision weapons dominated American warfare.

Building upon the initial success of the Gulf War that ended in 1991, the Kosovo War of 1998 and 1999 marked a fundamental milestone in the way the United States conducted warfare. It was within this conflict that precision was achieved with near-perfection, paving the way for it to become a staple of American strategic thought. No longer did American political and strategic thinkers need to concern themselves with justifying a heavy cost to both civilian and American military lives. Instead—through the combination of unarmed surveillance drones, real-time video transmission, and Tomahawk cruise missiles—precision increased, the costs of war were reduced, and the strategic advantage was maintained. Despite some high-profile incidents in which civilians were killed, Secretary of Defense William Cohen declared Kosovo to be “the most precise application of air power in history.” There were zero NATO combat deaths in Kosovo, so for the United States the war was seemingly cost-free and bloodless. These perceived successes had a lasting impact on American warfare.

Precision continued to dominate American strategic thought during the subsequent wars in Iraq and Afghanistan. Drones became armed, coupling long-range surveillance and loitering capabilities with the instant justice of the precision missile. Although armed drones were introduced during the George W. Bush administration, they matured under Obama. Drones were by no means a panacea, but they made it easier to avoid cost-heavy ground wars and the ubiquitous threat of improvised explosive devices. For Obama, the virtue of these precision weapons was that power could be projected over vast distances, targets could be struck with accuracy, and the cost to life could be reduced. As the “drone president” stated in 2013, “Simply put, these strikes have saved lives.” Over time, however, the disconnect between Obama’s precision ethos and the realities of war became apparent.

Between 64 and 116 civilians were officially listed as victims of counterterrorism strikes “outside areas of active hostilities” (then defined as Iraq, Afghanistan, and Syria) under Obama. The Pentagon recently estimated that more than 350 civilians have been killed in US-led strikes against Islamic targets in Iraq and Syria since 2014—although critics say official estimates are murky (for one thing, they do not distinguish between drone and conventional strikes) and that the actual collateral damage is greater than reported.

One issue is that precision is only as precise as the intelligence at hand and the tactics used. The cost to American military life was mitigated under Obama, and suspected terrorists were killed, but the risk to civilian life continued. This did not go unnoticed by the administration, and a struggle persisted throughout Obama’s eight-year tenure.

In an attempt to retain the benefits of drones while improving their moral justifiability, Obama made several changes in strategy: “Signature strikes” that “allowed drone operators to fire at armed military-aged males engaged in or associated with suspicious activities even if their identities were unknown” gave way to more discriminate, intelligence-based (although legally dubious) targeted killings. Control of armed drones shifted from the CIA to the Pentagon. And enhanced deployment criteria were implemented: Outside “areas of active hostilities” (which at the time included Iraq, Afghanistan, and Syria), “near certainty” of zero civilian casualties had to be guaranteed. Perfection was never achieved under Obama, yet the administration persevered in its quest to set the global standard for drone warfare. As the president concluded in his final months of office, “civilians were killed that shouldn’t have been. I think that over the last several years, we have worked very hard to avoid and prevent those kinds of tragedies from taking place.”

The world is now, however, a very different place. There is a new president, and the American approach to drone warfare has changed.

Under President Trump, the search for a just precision no longer lies at the heart of drone policy. On the campaign trail, Trump threatened to “take out [the] families” of terrorists. He said he would “blow up the [oil] pipes…blow up the refineries…blow up every single inch, there would be nothing left” in response to the Islamic State’s campaigns in Iraq and Syria.

Now that Trump is commander in chief, this rhetoric appears to have rapidly translated into policy that makes drone strikes less accountable, more indiscriminate, quicker to execute, and conveniently deniable. To achieve this, the president and his team have begun the process of rolling back Obama-era controls over the use of drones. Public accountability has been reduced, with the CIA regaining its authority to carry out covert strikes. Regions of Yemen and Somalia, previously not defined as war zones, have been classified as “areas of active hostilities,” allowing for strikes to be launched despite risk to civilians. The president is even moving ahead with plans to “streamline” the drone strike process, removing himself from the decision-making loop and delegating command down the chain. The aim, a senior Trump administration official stated, is “getting the White House out of the way of itself…to push decisions down to the agencies.”

The full impact of these changes is still unclear, but a worrying trend is starting to emerge. Not only are strikes increasing—Trump reportedly launched about one strike or raid per day during his first 74 days in power, compared with one strike every 5.4 days under Obama—but these strikes also appear to be more indiscriminate, resulting in more civilian fatalities. This is not to say that Trump is deliberately targeting civilians (although his campaign rhetoric would not rule this out); it is more that, with the relaxation of regulations and the toleration of higher risks, more civilians are dying. As in the less regulated early days of the Obama administration, “mistakes” are now more frequent. Examples of civilian casualties can be found in reports coming out of central Yemen and southern Somalia, the 200 civilians killed in Mosul, the bombing of a mosque near Aleppo, the misdirected airstrike in Tabqa, and the destruction of a school in Raqqa. It appears that a new drone playbook is emerging, one that is likely to mark the start of a dangerous future.

Under Trump, destructiveness has been mistaken for effectiveness, and this is likely to prove counterproductive. Knee-jerk and extreme responses do not make good counter-terror policy. Trump’s shift toward a more indiscriminate form of air strike—alongside the increased deployment of drones—might increase the risk of “blowback,” as former vice chairman of the Joint Chiefs of Staff General James E. Cartwright called it. So, in the future, drone-strike-inspired terrorism will likely remain a danger to the United States and its allies.

Trump’s new strike policy also sets a dangerous precedent about what level of force is acceptable, or indeed required, in the fight against terror. Will the Trump-era norms pave the way for other states to test the United States on how much force—and collateral damage—will now be tolerated? Recent trends in indiscriminate Russian strikes, and the alleged use of chemical weapons by the Syrian government, appear to highlight the emergence of just such “testing.” Finally, a point to consider—one that relates back to this issue of norms—is what Albert Wohlstetter, and colleagues such as Fred Iklé, warned was the “global diffusion of advanced technologies.” Defense One technology editor Patrick Tucker predicts that, by 2024, all states will have access to armed drones. With the large number of drones on the market, the technology is already spreading to non-state actors, which will have access to even more advanced armed drone technologies in the future. Great powers such as China and Russia are often discussed within this context, but smaller nations—including Myanmar, Nigeria, Egypt, Poland, Kazakhstan, and Turkmenistan—have also recently acquired armed drone technologies. What norms of use will set the benchmark for how these precision weapons will be used in the future?

It appears that the United States is at a fork in the road, with Obama’s “precision ethos” behind us and the “Trump doctrine” ahead. Neither is perfect, but the latter is more dangerous. If Trump’s tactics become the new normal, not only will it be harder for future US administrations to stand up to “drone atrocities” by smaller actors, but zones of conflict will likely become increasingly complex places for the United States, or indeed any great power, to navigate.