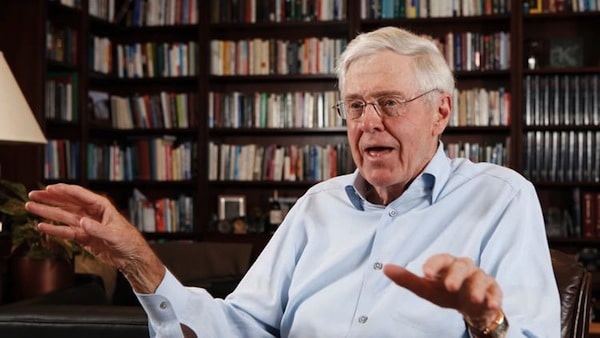 Here’s something you may not have known about the University of Utah: It’s been a center of scholarship in Marxian economic theory.

But the right-wing Koch family almost certainly knows. That could be why the Charles Koch Foundation is making a $10-million donation to the school to establish a distinctly non-Marxian Institute for Economics and Quantitative Analysis at the university’s business school. The donation will match a combined $10-million donation from two foundations of Utah’s Eccles family. (Hat tip to Erik Loomis of the University of Rhode Island, who picked up on the announcement.)

The University of Utah says there’s nothing to the supposition that the Koch donation is aimed at balancing the perceived Marxian bent of the university’s economics department. Adam Meirowitz, a business school professor who helped develop the idea for the institute and will be its faculty director, says the ideological reputation of the Koch brothers “unfortunately makes people worry.” He told me by email that “talk about balancing or countering is off the mark” and that the idea is based on “misperceptions.”

For the better part of a century, Castro’s Cuba and the University of Utah’s economics dept. seemed like the last bastions of Marxist thought in North America.— Deseret News, Salt Lake City

If so, those misperceptions are strong on the wing in Salt Lake City. One local newspaper, the Deseret News, which is owned by an affiliate of the Mormon church, couldn’t restrain its glee when the donations were announced July 20.

“For the better part of a century,” the newspaper groused, “Castro’s Cuba and the University of Utah’s economics department seemed like the last bastions of Marxist thought in North America — with the latter being subsidized by local tax dollars.” The institute, it editorialized, “will provide some philosophical balance to the university’s educational offerings and scholarship on economics.”

The university, for its part, thinks the Deseret News view of the department is outdated — or that it may be mistaking Keynesian economic thought, which is very much in the mainstream, for Marxism.

Meirowitz told me that he’s confident that the institute “will support high-quality research, not efforts to reach certain answers. There is no room for the foundations to challenge this.” Based on his conversations with foundation representatives, he says, “I also don’t see any desire to influence our choices.” The institute’s goals, he says, include building “a small but world-class research presence in economic theory and applied economics at the university” and supporting “a novel, mathematically intensive major for undergraduates.”

The university says it approached the foundations, rather than the other way around. The grant agreement between the university and the Charles Koch Foundation specifies that the direction of the institute, its budget, and its appointments will be subject to the university’s standard procedures.

Yet this may overlook ways the Charles Koch Foundation could exert subtle, or even not-so-subtle, influence over the institute. Its $10-million donation will be spread over eight years, with each annual $1.25-million grant contingent on a written request and, at the four-year mark, an “update” on “the progress made in establishing this new program.”

The foundation is “under no obligation to contribute any funds to the Institute or the University,” the agreement says, which implies it could be revoked at any time on almost any pretext. Moreover, the Koch and Eccles grants are contingent on each other, which means that a Koch objection could endanger the entire $20 million in institute funding.

This grant structure could magnify any Koch Foundation pressure on the program. That wouldn’t happen if the university insisted, as some institutions do, on a general grant to the university to be applied by administrators in any way they see fit, with the money paid up front and irrevocably. Anything short of that merely invites the donating foundation to try throwing its weight around.

I reached out for comment from the Charles Koch Foundation, but haven’t heard back. A spokesman for the foundation, John Hardin, told the Salt Lake Tribune that the foundation is devoted to promoting critical thinking via “a platform where [competing] ideas have the freedom to interact.”

The Kochs are anything but shrinking violets when it comes to how their money is spent. They tend to portray their educational contributions, which currently go to hundreds of colleges and universities, as impartial donations. But their “academic giving principles” point to an agenda aimed at fostering “the principles of free societies” — in practice, that tends to mean those with fewer regulations or government interference in free markets. “Just as upholding values such as free speech, property rights, and progress are important to a healthy, growing society,” the foundation says, “they are also pivotal in fostering a healthy, growing organization.”

How has that worked in the real world? Sometimes the strings attached to a Charles Koch Foundation grant are overt. That’s what happened at Florida State University‘s economics department, which accepted $1.5 million from the Charles G. Koch Charitable Foundation, a precursor of the Charles Koch Foundation, in return for giving the foundation the right to accept or reject faculty appointments made with those funds; in the first round of hiring, the foundation rejected 60% of the university’s faculty choices. And a 2008 agreement between that foundation and Utah State University’s business school gave the foundation the right to approve or reject professors hired under a $625,000 grant.

One interesting aspect of the University of Utah institute is that it will bear the name of Marriner Eccles, not Charles Koch. That reflects both the magic of the Eccles name and the opposition Koch inspires.

The Eccles clan is among the most prominent and respected in Utah, dating back to its patriarch, David, who lived around the turn of the last century, when he was the leading tithe payer to the Mormon church, and after whom the business school is named. Two family members sit on the university’s board of trustees.

Marriner Eccles (1890-1977) is the family’s most illustrious forebear, but he wasn’t born that way. He was the oldest child of David’s second polygamous family, which was disdained by the senior family and almost entirely shut out of the Eccles fortune when David died without a will in 1912.

Marriner, however, turned out to have a flair for business. He managed the family’s construction business, Utah Construction, which reaped a fortune as a major contractor on Hoover Dam, as well as its banking business. But he was anything but a conventional conservative. He was an ardent New Dealer and a believer in the role of government in managing economic crises.

FDR brought him to Washington, where he wrote the legislation that gave the moribund Federal Reserve System the powers it needed to help manage the economy, and appointed him the Fed’s first governor after the legislation passed. The precepts of John Maynard Keynes weren’t well known in the U.S. at the time, but it’s proper to regard Eccles as a proto-Keynesian. He’s widely regarded as the architect of the modern Fed, whose Washington headquarters building bears his name.

That leaves the question of how Utah gained its reputation as a hive of Marxian scholarship in the first place. The process apparently began with the arrival of leftist economists from UC Berkeley, who were fleeing an atmosphere of ferocious anti-communism there after World War II. They recruited two notable Marxian economists, Hans Ehrbar and Emery K. Hunt, both of whom are now retired and listed as emeritus professors. As Marxian economic analysis fell out of favor, and Marx’s thinking became relegated to the history and philosophy departments, Utah remained one place where he was still taught as an economist.

The university, for its part, says the notion that its economics department is still “red” is outdated, especially since Ehrbar and Hunt are long retired. What remain, the university says, is a department committed to a diversity of economic research, including the Keynesianism espoused in effect by Marriner Eccles.

Would Eccles approve of his role in American economic history being caricatured as Marxian by supporters of an institute bearing his name? Good question.