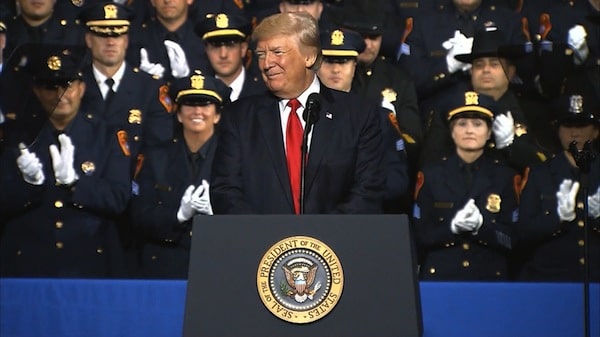 In a speech to law enforcement officials in Long Island on Friday, the president of the United States delivered a clear and chilling message: He thinks that unauthorized immigrants are subhuman, and that law enforcement should treat them accordingly.

The ostensible villains of Trump’s speech: the transnational criminal gang MS-13, which started in California but has taken root in El Salvador and whose members have been fingered in a string of high-profile killings in Long Island. Trump described MS-13 members as “animals” who “have transformed peaceful parks and beautiful, quiet neighborhoods into bloodstained killing fields.”

But the president has never been particularly scrupulous about differentiating “good” and “bad” immigrants. The lurid details of MS-13 crimes ended up underpinning a theme Trump has used before — that the US is “besieged” by migration (largely, in reality, of children and families) out of Central America:

Of course, Trump claims that thanks to his administration — one of whose first priorities was to “unshackle” immigration field agents to give them more latitude in going after unauthorized immigrants — the rule of law is being restored.

But Trump’s idea of the “rule of law” is mostly about looking and acting, in his own words, mean.

I saw some photos where Tom [Homan, the acting head of ICE]’s guys, rough guys, they’re rough, I don’t want to be — I don’t want to be, you know, say it because they’ll say that’s not politically correct, you’re not allowed to have rough people doing this kind of work.

At one point, Trump literally instructed the assembled police officers not to protect the heads of suspects who were under arrest and were being loaded into police cars:

When you see these thugs being thrown into the back of a paddy wagon, you just see them thrown in, rough, I said, please don’t be too nice. Like when you guys put somebody in the car and you’re protecting their head, you know, the way you put their hand over. Like, don’t hit their head and they’ve just killed somebody. Don’t hit their head. I said, you can take the hand away, okay?

Here’s the president of the United States encouraging police officers to be rough with people they arrest pic.twitter.com/iLzoUEY89e

It’s the closest Trump has come since inauguration to his infamous calls for violence against protesters at campaign rallies during the presidential primary. The themes aren’t new — they’re literally the oldest trick in Trump’s book — but they’re increasingly explicit. That’s a very bad sign.

Demonizing immigrants brought Trump to victory. Now it’s the theme he returns to whenever he’s struggling.

Back in 2015, Donald Trump launched his journey toward the presidency by winning surprising support for a single, powerful theme: Unauthorized immigrants are dangerous criminals who are invading America and coming for your family.

Trump’s concern with immigration has always primarily been with crime. He won early political allies in Sheriff Joe Arpaio of Arizona and the “Angel Moms” whose children were killed by unauthorized immigrants. The vision of America promulgated in his most important speeches — his more-Nixonian-than-Nixon speech accepting the Republican nomination, his “American carnage” inauguration address — is unusually dark for a successful politician in this country. In Trump’s rhetoric, America was no longer great not because it was in some graceful decline, but because it was under siege from the forces of disorder: unlawful immigrants and lawless protesters.

In six months in the presidency, Trump’s already established a pattern: When his agenda is floundering, he returns to the theme that first made him a popular figure. It’s an opportunity for him to brag (with some basis in reality) about how much he’s accomplished as president, since his administration really has been able to make strides in expanding enforcement.

He’s trotted out acting ICE Director Homan for press briefings twice in the last month: first at the end of June when it became clear that the health care bill the House of Representatives had passed wouldn’t make it through the Senate, and then this week, as it became doubtful that the Senate would pass a health care bill at all.

Returning to the theme of scary immigrant criminals is also a chance for Trump himself to return to the vibe of his campaign rallies: tough talk before an adoring crowd. So on Friday, the day after the Senate’s last-ditch effort at passing a bill was defeated in a stunning late-night vote, Trump was in Long Island. Obamacare got a passing reference; the methods by which MS-13 members supposedly torture and kill Americans were addressed in gory detail.

The heroes of Trump’s America are law enforcement — the beat cops in America’s supposedly crime-ridden “inner cities,” the ICE agents tasked with deporting unauthorized immigrants. His biggest policy accomplishments (and certainly the ones his administration brags about most) have been “unshackling” these officers, giving them less oversight and fewer directives to allow them to fight “bad hombres” the best way they see fit.

The implication has always been that it’s acceptable, even necessary, for them to be a little rough, a little cruel, a little “not nice” — that upholding law and order required bending the former to ensure the latter.

Now, that implication is explicit.

Trump’s rhetoric isn’t dangerous because it’s likely to become federal policy. There’s not going to be a directive ordering federal law enforcement officers to slam suspects’ heads into car doors during arrests. (Trump remains impressively insulated from the reality of policymaking. On Friday, he described MS-13’s presence in Long Island as “a new phenomenon”; the George W. Bush administration was conducting ICE gang sweeps on the island a decade ago.)

It’s dangerous because, at best, it successfully communicates to law enforcement agents that their moral superiority to the “animals” they apprehend justifies or even mandates violence. At worst, it communicates that message more broadly to the most fervent of the white supremacists who number among the president’s supporters.

Either way, it sends a clear message to Latinos in America — both unauthorized immigrants who are liable to be arrested by ICE at any time and might be falsely accused of gang membership in the process, and legal immigrants and citizens who nonetheless might “look like a gang member” to the wrong person based on the color of their skin. Trump is telling them there is no one who can keep them safe.

And his audience greeted the message with thunderous applause.